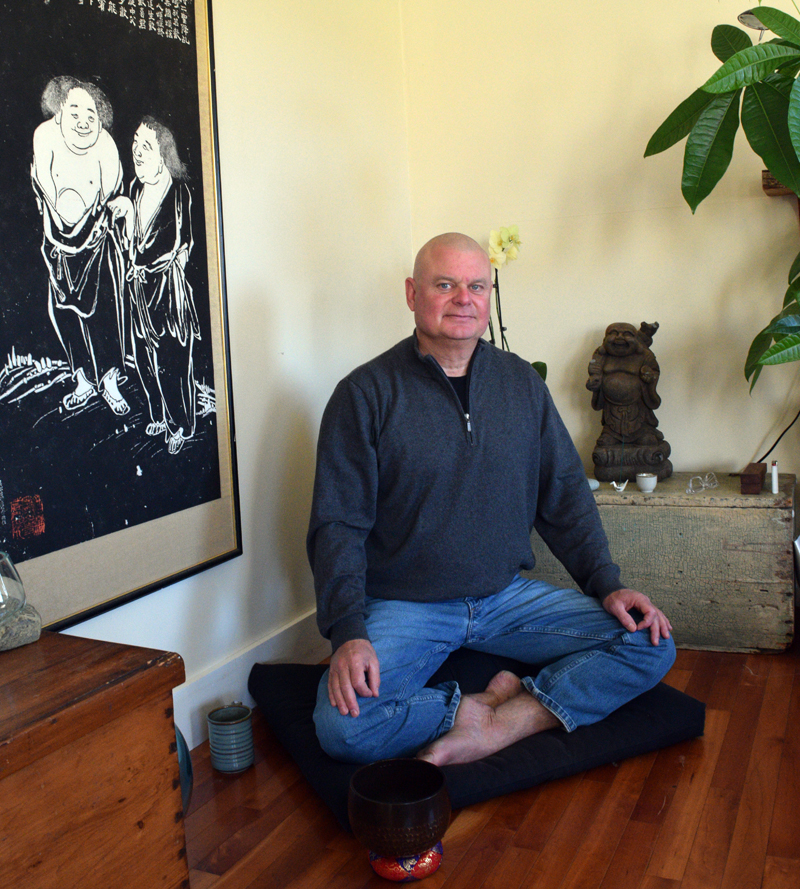 Jizai Don Sorterup sits in his home in Damariscotta. Sorterup is an ordained Zen Buddhist priest and hosts a sangha, or Zen Buddhist community, which gathers to meditate on the first and third Sundays of the month. (Evan Houk photo)

Damariscotta’s Jizai Don Sorterup has always been interested in spiritual leadership and helping people. As a life coach and an ordained Zen Buddhist priest, Sorterup has opportunities through his work to find fulfillment by helping others.

“Spirituality has always been a deep thread,” Sorterup said.

Originally, he considered becoming a therapist, but wanted to focus more on the present and future with clients, rather than the past.

“It’s a very forward-moving practice,” Sorterup said. “And helping people realign with their beliefs, their values, what they really care about in life, and helping them to transition to a more fulfilling life for themselves.”

Sorterup grew up in Rhode Island and Massachusetts, moving every three years or so.

His father founded the first joint venture between a Chinese and American company in the early 1980s, the Shanghai Foxboro Co., and Sorterup ended up in Shanghai, China at 15.

“It was a whole different world,” Sorterup said.

Sorterup also taught English as a second language in Japan, saying he was influenced by Eastern tradition from an early age. He originally thought he would follow in his father’s footsteps, and he studied international relations.

However, growing up in a Christian family with a deep sense of spirituality, Sorterup then decided to attend seminary school at Fuller Theological Seminary in Pasadena, Calif. to become an Episcopal priest.

However, this path did not completely meet his spiritual needs and he moved to North Carolina, where he took up painting full time, which he did for about 35 years until he became tired of it.

“It was a great business to pick up wherever I went,” Sorterup said. “The work was pretty Zen-like. Just being fully present to whatever I am doing in the moment.”

Sorterup moved back to Rhode Island, where he took care of his grandmother who was living right across the border in Massachusetts. She was suffering from dementia and he cared for her for the last six years of her life. This experience is where Sorterup discovered he can help people, sometimes just by sitting with them in silence, similar to meditation, which he practices daily.

“Visiting her on a regular basis reinvigorated my mission to be working with people versus working with walls and paint,” Sorterup said. “Those are probably some of the more touching moments of my entire life.”

“I think that fostered a really deep connection, not only with her, but that’s also what I feel like I bring to the meditation circles,” Sorterup said.

Sorterup presents a very calm and soothing presence during his meditations, which are held weekly at The Peace Gallery in Damariscotta at 6 p.m. on Wednesdays.

“If more people just sat down in a circle together and meditated together without saying anything, without any dialogue, and just being fully present with one another, what a shift that might be in creating a more peaceful world,” Sorterup said.

Shortly after moving to Maine to live in a more natural environment, in the winter of 2019, Sorterup felt a calling to Zen Buddhism. He saw the name of the Zen Buddhist sangha he wanted to create in the local area, ZendoME.

“I had a vision of the name itself. That started to formulate the vision,” Sorterup said. “I knew I really wanted to curate a local community in Midcoast Maine.”

A sangha is a Zen Buddhist community. ZendoME meets on the first and third Sundays of the month for mediation groups at his home in Damariscotta.

“There’s certainly a need out there that’s being filled,” Sorterup said.

Sorterup began his full two years of study to become a Zen Buddhist priest in August 2020, setting off on a more fulfilling spiritual path.

“I didn’t discover a greater alignment in my spiritual path until I found Zen,” Sorterup said. “Because I wasn’t being told what to believe, I was asked to experience.”

Sorterup said that there are 10 primary precepts to Zen Buddhism, which guides followers in how to experience life.

“They are all in the affirmative. So instead of ‘I’m not going to kill anybody,’ it’s ‘I affirm life,” Sorterup said.

Some other precepts are based around acting generously, being honest, sacred stewardship, protecting the environment we live in, and how we spend our money.

“What are our highest values in collaboration with Mother Nature?” Sorterup said.

He said the vows he took to become a Zen Buddhist priest were very serious and profound.

“I felt much more aligned with my true nature, my true self, based on those principles that I live by,” Sorterup said.

For more information, go to donsorterup.com.