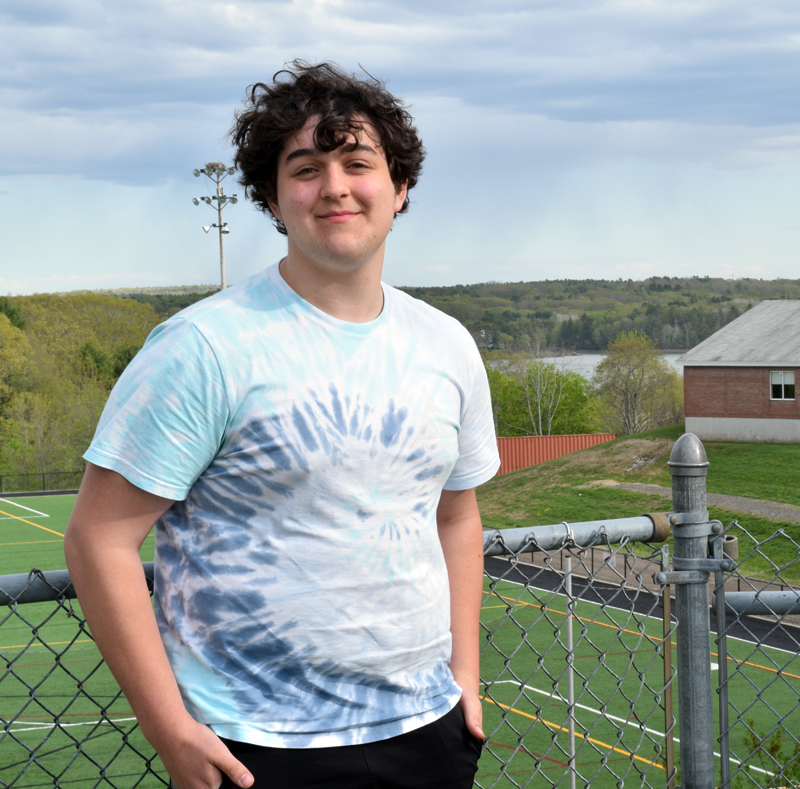 Cooper Swartzentruber, a 17-year-old junior at Lincoln Academy in Newcastle, stands on the school’s campus on Tuesday, May 17. Swartzentruber will be perform this weekend in the All-State Music Festival at the University of Maine in Orono as the top-ranked alto saxophonist in the state. (Evan Houk photo)

Cooper Swartzentruber, a 17-year-old junior at Lincoln Academy in Newcastle, will be performing this weekend in the All-State Music Festival at the University of Maine in Orono as the top-ranked alto saxophonist in the state.

The All-State Music Festival is an all-star assemblage of the best student musicians in Maine.

“They rank you per chair, based on how well you do, and they make a big band out of all the best musicians,” Swartzentruber said during an interview on Tuesday, May 17.

Swartzentruber was born at LincolnHealth’s Miles Campus in Damariscotta on Oct. 27, 2004 and has lived in Newcastle for most of his life. His parents moved him into the landmark “Wee Hoose” on Glidden Street, where the new residents were unprepared for the Halloween holiday.

“They always tell me the funny story about how they see a mob scene of all the trick-or-treaters,” Swartzentruber said.

In addition to ranking first in the state for alto sax, Swartzentruber also ranked fourth in the entire country for the National Association for Music Education All-National Honor Ensembles based on his auditions.

He is happy about the honors and acknowledges that he has been “working his tail off” ever since he first discovered the saxophone, because of his passion for the instrument.

“My big thing is saxophone and music, that is totally my thing,” Swartzentruber said. “I’ve made connections country- and state-wide. I’ve met some of my best friends playing saxophone.”

His dad, Dale Swartzentruber, said he bought Cooper his first drum kit when he was 5 years old.

“He started playing and immediately had rhythm,” Dale said.

Cooper also credited his dad with introducing him to a variety of music growing up.

In third grade at Great Salt Bay Community School in Damariscotta, Cooper Swartzentruber started playing violin and he still plays the instrument, as well as pretty much anything else he can get his hands on.

He has been playing alto saxophone for seven years, ever since he joined band in fifth grade and heard his teacher playing the instrument.

“I wanted to play saxophone because it sounded cool to me,” Swartzentruber said. “I thought all the cool kids played saxophone.”

He has played with different bands like the Portland Youth Ensemble and the Bowdoin College concert band.

Swartzentruber looks to continue pursuing the saxophone, hoping to attend a music college, majoring in performance and education. Then he can work as a touring musician before potentially settling down to teach music.

“I want to be able to pass on my skill to other kids,” Swartzentruber said.

This summer, he will be attending an intensive five-week program at the Berklee College of Music in Boston, one of the schools he is looking at attending college.

His favorite music is jazz and he enjoys listening to saxophonists Charlie Parker, Phil Woods, and John Coltrane.

At school, he said he enjoys the subjects of anatomy and English. He also is a member of the Lincoln Academy Ambassadors, which helps welcome new students to campus.

For Swartzentruber, it is those “goosebumps” moments in music that keeps him going, like when he hears a new sound and pushes himself to sound like that. Then, he said, he hears something else he wants to learn how to play and practices at that.