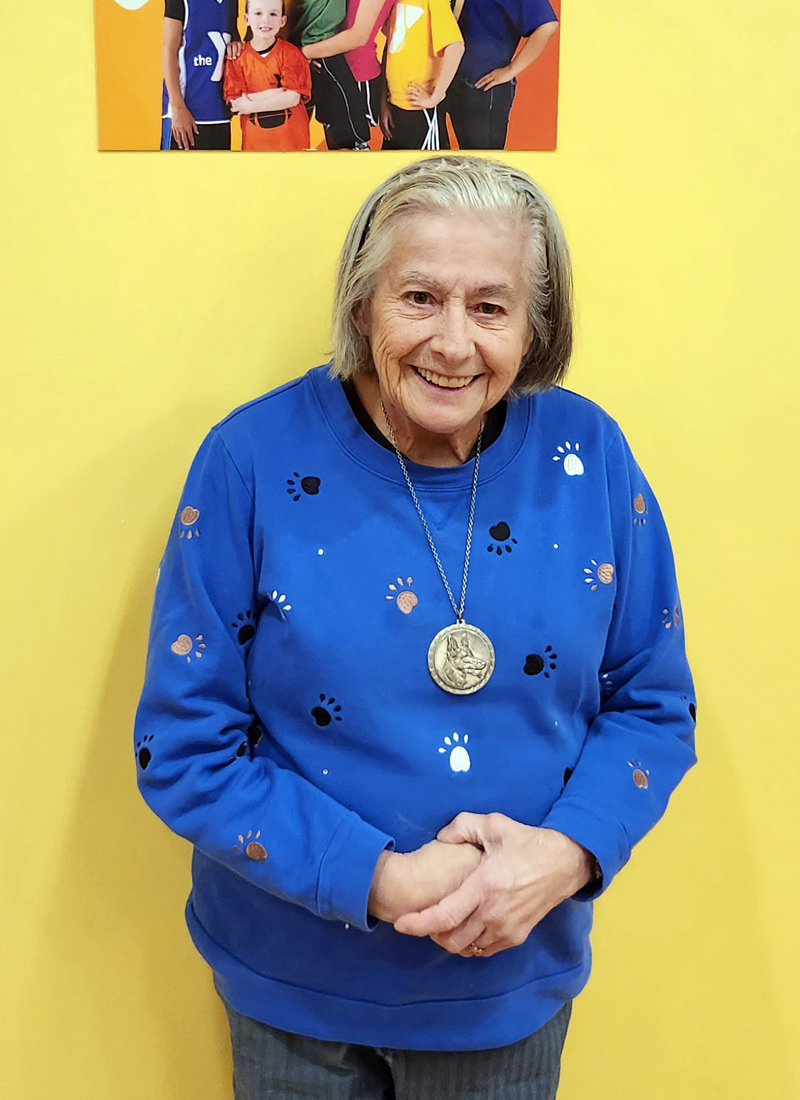 Reflecting on her nearly 60 years of training, raising, and showing dogs, Boothbay resident Jean Conte said she wouldn’t even think about putting a number on the amount of dogs she has trained throughout her career.

“Oh way more than that,” Conte said when asked if she taught at least 500 dogs.

Conte said she has always had an affinity for canines. Growing up in Hollidaysburg, Penn., Conte would bring home stray dogs to a mother who was often not amused with the new house guest.

“She would get so mad, but they would just follow me around the neighborhood and I would feed them,” Conte said.

Conte’s first experience with dog training came in 1960 when she was living in Utica, N.Y. and started bringing her boxer, Princess, to obedience classes. “She was the type of dog that was very sensitive,” Conte said. “Just raising your voice would scare her.”

By 1965, Conte had adopted a German shepherd, her favorite breed, she named King. King would end up teaching her a great deal about raising and training dogs, Conte said.

“King taught me so much because he was so bad. He was a runaway,” Conte said. “When you have a dog you actually have to work with, you learn so much more than with a dog that is well behaved.”

King’s behavior and tendency to run away made Conte all the more determined to train him. Her stubbornness resulted in King obtaining his utility certificate at the age of eight years old.

“That is very old for a dog to be trained,” Conte said.

Conte believes it is her responsibility to raise well-behaved dogs that reflect positively on the breed’s public opinion.

“It’s important to me to present my dogs as a positive example because their behavior is a reflection of that breed,” Conte said. “People will believe a dog’s breed is the cause of its poor behavior rather than the owner not training the dog.”

Conte began leading her first class training dogs while living in Utica. While she could not recall the exact year, a woman’s comment after the class stood out in Conte’s memory.

“She had come up to me and said, ‘19 dogs and I didn’t hear one bark,’” Conte recalled. “Dog training just came naturally to me.”

Conte developed her skills as a dog trainer by attending classes with a local trainer in Utica, Joe Olivia. After King obtained his utility training certification Olivia trusted Conte to teach his classes, despite her belief some of the other class members were more qualified to teach than she.

“Joe believed that King receiving his utility training was a better accomplishment, which is why he trusted me to teach the class,” Conte said. “I was very proud of that.”

Instilled with confidence from her training she decided to start attending dog shows with King in the late 1960s. It was also something she could participate in with her two children, Michael and Jackie.

“I would bring them with me and let them sit in this wagon and they could play with one toy or they could watch,” Conte said. “They were not allowed to just run around.”

Traveling throughout New England, Conte would bring her children along while she attended dog shows, much to the surprise of her peers.

“I never realized children did not travel so much back then,” Conte said. “People would come up to me and talk to me about all the places (the children) have been and were shocked.”

Conte enjoyed attending dog shows at the time because she enjoyed being surrounded by people who had similar passion and love for dogs. She believes shows today are more competitive than when she started, and therefore a little less enjoyable.

“People were competitive back then but we all rooted for each other,” Conte said. “Now everyone is focused on the points.”

Living in Utica, Conte met her second husband, Joe Conte, in the early 1980s, and the couple married in 1983. She was amused by the reaction Joe had when she picked him up for their first date.

“My van was custom-made for my dogs with a bed in the back and a red light that turned on when he opened the door,” Conte said. “His face when he saw that was hilarious.”

Around that time, Conte began camping in Maine with Joe while continuing her travels to dog shows.

“Joe loved coming to dog shows with me,” Conte said. “He did it mainly for the people. Since he had nothing to do during the shows I would give him a camcorder and have him film me during dog shows so I could see what I was doing wrong.”

In the 1980s the Contes started camping in Maine; eventually buying a house in Boothbay in 1992 and moving to Maine full time in 1995.

Conte has been training dogs in Lincoln County for nearly 30 years. She started teaching locally at the Boothbay Region YMCA where she taught for 13 years. For the past 14 years she has taught at Central Lincoln County YMCA.

With her 85th birthday approaching on Jan 3, Conte said she was leaning towards retiring from dog training at the CLC YMCA.

“My get up has got up and gone,” Conte said.

Reflecting on her 60 years of dog training Conte had no regrets.

“I’ve watched people’s dogs improve from my class and it is such a good feeling,” Conte said. “The people are so proud of what they accomplish and their bond with their dog is much closer.”