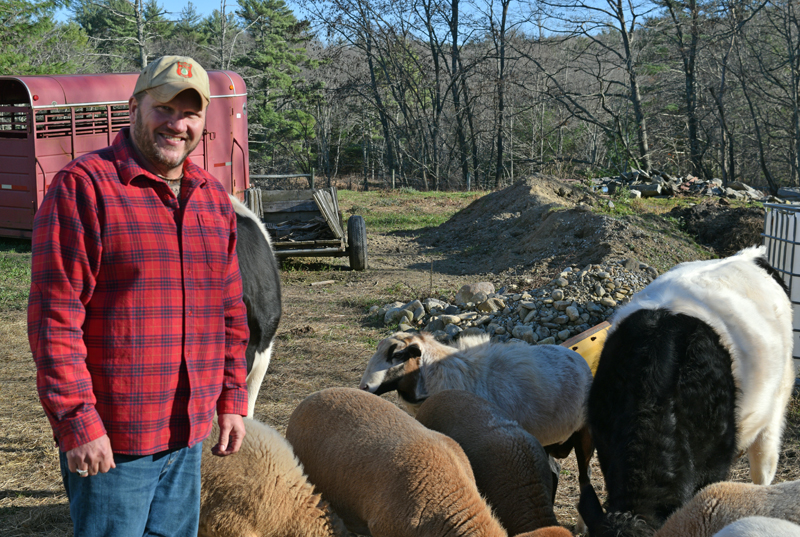 Walter Greene-Morse stands with his livestock at his Jefferson homestead, Patriot Ridge Farm, on Tuesday, Nov. 8. Greene-Morse and his wife grow food for themselves and friends and family on the farm and he hosts fly-fishing trips for veterans. (Evan Houk photo)

Walter Greene-Morse, owner and operator of Patriot Ridge Homestead in Jefferson, has been committed to serving his fellow veterans and serving the local school community since moving back home in 2013.

Greene-Morse said that the outdoors, helping veterans, and education are his main passions.

He grew up in Jefferson, two houses down from the Washington Road homestead where he currently lives with his wife and three children. He attended Jefferson Village School and graduated from Medomak Valley High School.

After graduation, Greene-Morse followed in his father’s and his sister’s footsteps by joining the U.S. Army, where he served for 22 years. The military provided a way out and a “leg up,” he said.

“We were seven kids with a single mom, so things were tight, to say the least,” Greene-Morse said.

He originally intended to serve “until it stopped being fun,” which happened shortly after being injured when three powerful armor-piercing explosives hit a Humvee he was traveling in while deployed in Iraq in 2007.

He said the first two explosions blew up the front and back of the vehicle, while the third became lodged in the door right next to his leg, miraculously not exploding. He said he should not have survived the incident.

“It was a big hot molten copper disk. You could see it from the inside,” Greene-Morse said.

The last few years of his military career were spent at Walter Reed National Military Medical Center in Bethesda, Md., recovering from shrapnel wounds and a traumatic brain injury from the concussion sustained in the blast.

Greene-Morse found himself with memory issues and limitations of movement and fine motor skills on the left side of his body. He found physical and mental therapy by fly-fishing with Project Healing Waters, which inspired him to host fly-fishing trips himself for veterans in Maine. The fly-fishing helped in socializing with other veterans and honed his motor skills through the act of tying a fly.

“You can’t think about anything else when you’re trying to set a dry fly,” Greene-Morse said. “It’s amazing how fine of motor skills are required to tie flies and cast.”

As a registered Maine guide, Greene-Morse leads fly-fishing outings for veterans on Kennebec River and Damariscotta Lake, seeing the profound impact it has had on people.

He said the fishing trips open up the participants and allow them to have fun.

“They forget about fishing and it’s more about the camaraderie,” Greene-Morse said.

While still in the U.S. Army, Greene-Morse began reading books on agriculture and homesteading. He and his wife, Aaron Greene-Morse, met while working as U.S. Army recruiters in Bangor. After ending their service, the couple moved to Jefferson to start their homesteading life when they purchased an 1835 farmhouse.

Restoring the old house has been an ongoing project, with renovations being completed this year.

Greene-Morse has always been interested in the outdoors since he was young, he said, and he and his wife wanted to grow clean healthy food for themselves and friends and family.

“There’s no better way to know than to grow your own,” Greene-Morse said.

In 2016, Greene-Morse helped found the United Farmer Veterans of Maine, where he served as president for the first few years. The nonprofit’s goal is to advance the success of veterans’ agribusinesses, and to develop a means for helping transitioning veterans reengage in civilian life through farming with on-the-job training, according to its website.

At one point the homestead brought in 80 Mangalica pigs to put on five different veteran-owned farms for them to reproduce and support the farms.

“It’s humane to the animal and it also makes a much better meat quality,” Greene-Morse said of his natural farming techniques.

Homesteading life is hard work, Greene-Morse said, but he and his family find it to be very rewarding. He told a story about a calf that was birthed unexpectedly on Dec. 23 last year when the whole family had to help out. He described it as a valuable learning experience for his three children.

“It was all hands on deck,” he said. “They understand the importance of life and how much of an impact you have.”

Greene-Morse started on the Jefferson School Committee in 2014 after moving back to the area and his daughter was starting kindergarten at Jefferson Village School. He is currently in his eighth year.

He said that there have been educational setbacks over the last two years because of the COVID-19 pandemic and that the school has implemented a block of time for students to evaluate themselves and where they’re at and to get individualized attention.

Greene-Morse said he enjoys the work on the school committee, trying to provide the best education possible with the limited funds available.