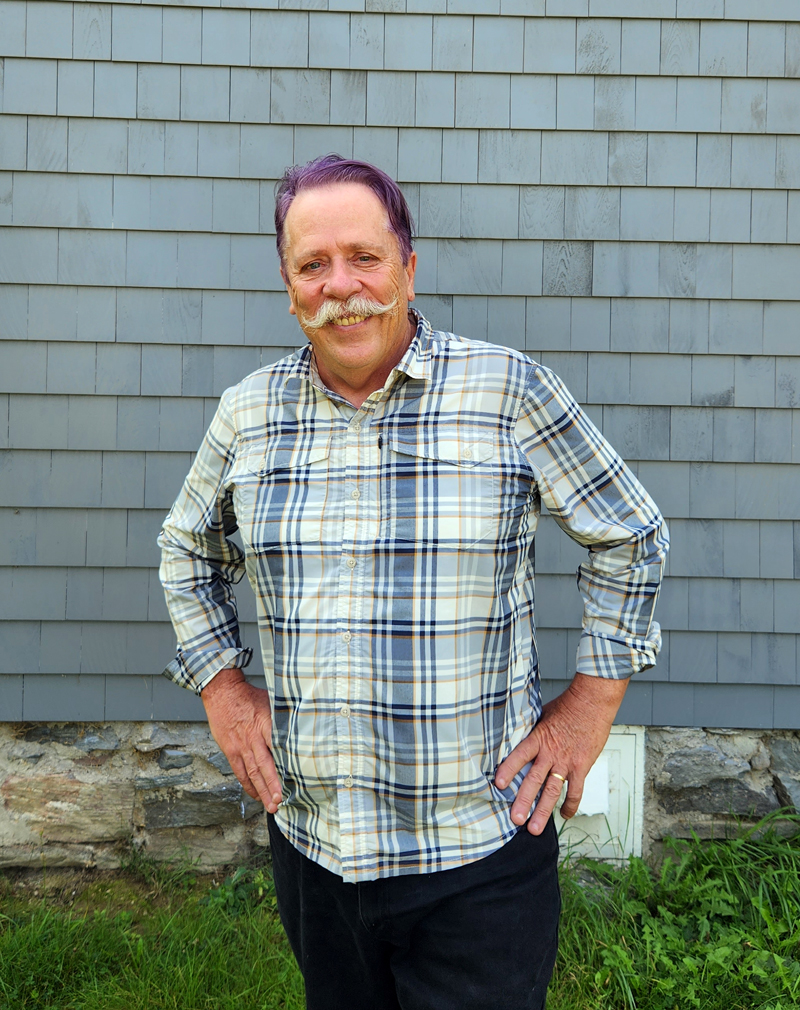 Jim Amaral poses for a photo outside his Alna home in Alna on Thursday, Sept. 8. (Alec Welsh photo)

Borealis Breads’ owner Jim Amaral may be better known as a businessman at the forefront of Maine’s thriving local food movement, but he credits his travels abroad for helping him arrive where he is today.

The majority of Amaral’s traveling occurred after he turned 18. Born in England to a U.S. Air Force serviceman and an English mother, his first trip was from England to Boston where he would spend most of his childhood.

“I spent a lot of time traveling during college,” he said. “I started college in 1976 and took seven years to graduate because I took time off to travel.”

Amaral credited cheap tuition and a lack of pressure from his parents for his ability to obtain a degree on his own timeframe. “Tuition was only $4,000 when I went to college and I could earn that over summer working in a bakery,” he said. “So it was really whatever I wanted to do.”

Amaral attended Bates College in Lewiston, earning a Bachelor of Arts in philosophy and religion in 1982.

“At that age you are open to anything and you think about the foundational questions in life like why are we here, what are we meant to do,” Amaral said. “Those were two subjects that dealt with those topics to a great degree.”

Traveling and exploring other cultures gave Amaral the chance to see humans practice religious beliefs he had studied.

“I went to a Hindu festival; I’ve had an audience with the Dalai Lama,” Amaral said. “I have traveled to an area along the Chinese border called Ladakh, a place in India where they practice Tibetan Buddhism. It was amazing to see that in practice after learning about it in the classroom.”

Amaral was raised as a Catholic but his parents left the church when he was still a child, he said. “We had black friends and neighbors and our bishop wanted nothing to do with integrating our church,” Amaral said. “It led my parents to turn away from the church.”

Acknowledging the difficulties traveling to a different culture can present, Amaral still encourages individuals to travel.

“It’s not an easy thing to do, being in a strange culture where you might not know the language,” Amaral said. “It puts you in uncomfortable situations that you have to learn how to navigate.”

Amaral believes overcoming the fearfulness of being in a foreign environment builds resilience and leads to opportunities for unique experiences.

Living in Egypt for six months in 1981, Amaral had the extraordinary experience of witnessing the assassination of the Egyptian president Muhammad Anwar El-Sadat on Oct. 6.

“I was working at the Papyrus Institute of Egypt, a museum in Cairo where I would make sure translations of historical text were written in proper English,” Amaral said. “I wasn’t translating; just made sure it was translated correctly for English readers.”

Amaral worked with an English man named Julian at the museum and the two traveled together to see Sadat speak. Amaral could not recall Julian’s last name.

“It was an annual victory parade held in Cairo to celebrate Operation Badr, during which the Egyptian army had taken back the Suez Canal from Israel during the Yom Kippur War,” Amaral said.

Amaral said he was standing in the crowd less than 100 yards away from Sadat when some of the soldiers in the parade shot the president.

“We ran,” Amaral said of the immediate reaction to the shooting. “We ran so fast. Everyone started running and screaming and yelling. It was sheer chaos.”

Amaral said he and Julian ran from the scene for approximately 15-20 minutes before the crowds thinned out and they were able to board public transportation back to their apartment.

“We had no idea what was going on. We knew Anwar had been shot, but we didn’t know if he was dead, or who was in charge,” Amaral said. “People in the States knew more than we did.”

Despite witnessing the assassination, Amaral did not think about leaving the country.

“The environment changed,” he said. “The whole city was in a military lockdown, but I didn’t go home until December after coming down with hepatitis.”

Amaral returned to the states and Bates College where he would meet his future wife Dolores at the college in 1983.

“I dumped her and realized that was a mistake,” Amaral said. “We got back together and married in 1990.”

Two years after his wedding, Amaral and his wife moved to Belfast, Maine where he decided to started developing his own sourdough bread recipe.

“My wife and I had lived in Seattle for two years, from 1990 to 1992, where Dolores learned to become a midwife and I learned how to bake sourdough bread,” Amaral said. “About a year after living in Belfast I decided to create Borealis Breads in 1993.”

Amaral opened a store front in a basement in Waldoboro to launch his business hoping to purchase his own building within seven years.

“We were able to open up in two years,” Amaral said. “There was no competition for sourdough bread at the time so we had great timing.”

In 1997 Amaral was able to open a second Borealis Breads location in Wells.

“I love baking’ he said. “You get to work with your hands and it is a creative process.”

Since 1994 Amaral and his wife have lived in Alna while managing their bread business. Amaral credits lucky timing and loyal customers for his ability to stay in business.