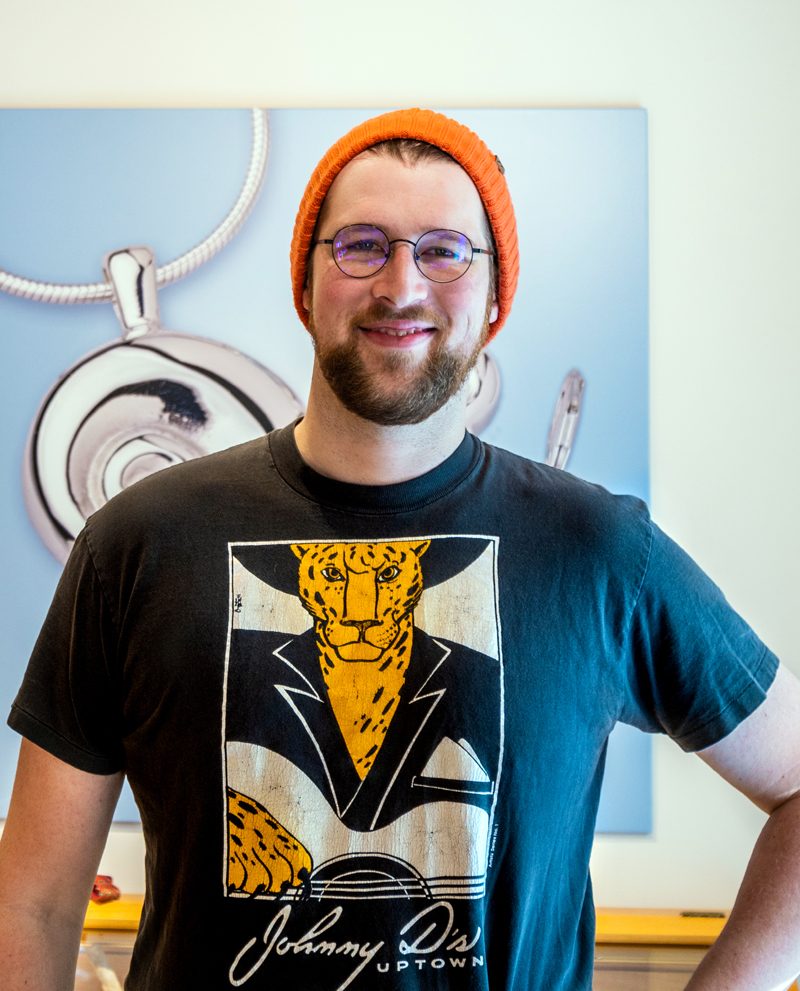 Joe Lugosch stands for a photo in Edgecomb’s Peapod Jewelry store on Jan. 11. Lugosch purchased the business from his mother and has designed new pieces that add his own spin to the store’s classic aesthetic. (Bisi Cameron Yee photo)

Joe Lugosch has been mentioned in the pages of The Lincoln County News 38 times. That’s what happens when a person grows up in local theater.

Lugosch has acted in more than 70 productions at Heartwood Theater, Lincoln Theater, the Waldo Theatre, and River Company. Not to mention any number of productions in Chicago.

Lugosch was born in dramatic fashion on a Thanksgiving Day, his head caught at an angle that impeded delivery. The young doctor originally in attendance was not trained in the use of forceps to correct the baby’s position, and transferred Ronna Lugosch to Pen Bay Medical Center. There a more experienced doctor who had delivered babies “in the mid-20th century” was able to wield the forceps with the necessary skill.

After all that Joe Lugosch said he was a very calm baby, and a shy child. He grew up on the Bristol-Bremen town line in Round Pond, playing in the woods, riding his bike, building toy battleships in his father’s workshop. He said he felt lucky to be born before technology took over everything. He had years to develop his imagination.

He and his friends would go to the shore and pelt each other with periwinkles or to the woods where spiny horse chestnuts were the preferred ammunition. They would pick up bottles and cans and bring them to the redemption center at King Ro and use the money to buy penny candy at Granite Hall.

He actually got a job there in high school, with access to all the penny candy he could want.  “There’s one thing about penny candy – it doesn’t matter how much you eat, it never satisfies,” he said.

When Joe Lugosch wasn’t with his friends he spent time with his mother at her studio in Camden, a designer jewelry mecca at the time. He said he was the kid who would hide behind his mother’s legs when strangers were around. But that reticence did not last.

When he was 12, he went with a friend to audition for a production of “The King and I” at the Lincoln Theater. It started out as an opportunity to hang out with a friend, and wound up as a chance to become part of a community. He played Guard Number Two and lobbied hard for a little extra time on stage. “It’s thrilling up there,” he said.

Joe Lugosch graduated from Lincoln Academy, where he had the opportunity to work with and be mentored by Heartwood Regional Theater’s artistic director Griff Braley who was also a teacher at the school.

While in high school, Joe Lugosch worked on what would become his craft. He learned the value of digging into a challenging character at Heartwood and showed off his vocals in musicals at the Lincoln Theater.

He took a gap year in the Czech Republic, not yet ready to commit to college. His family had visited Prague when he was eight, and the experience stayed with him. He learned the language, made friends, and enjoyed a world completely different than he had ever experienced, a world of hills and valleys and rivers he called “lush and beautiful.” And the performer in him was fascinated by how American cinema and music were viewed by a different culture.

Joe Lugosch studied theater at Ohio Wesleyan University. He worked hard at the classes he was interested in: drama, sculpture, botany. Not so much the others. He regrets that, and a return to college at some point is a future goal.

He moved from Ohio to Chicago, a town rife with opportunities for actors. Chicago was a known entity – his mother’s family was from the area and he visited his grandmother there many times.

He worked in short films and web series and supported himself with occasional carpentry and a job at Trader Joe’s. But he wasn’t finding the roles that fulfilled him, the character work he craved. And although he loved Chicago, he hated living there. He preferred what he calls “the brutal honesty of people on the East Coast.”

He took a four-day trip to the Grand Teton National Park in Wyoming and realized he needed to be in nature, to live life more holistically. “I needed to breathe.”

When his mother invited him to take an open position at Peapod Jewelry, he returned to Maine where he found more fulfillment and opportunity than he expected. He was able to draw on lessons learned in his father’s workshop and during his classes in sculpture to craft his own take on his mother’s classic peapod design.

His first piece for the store was a jack-o-lantern inspired by Damariscotta’s Pumpkinfest. It sold exceptionally well and bolstered his confidence; he had more to offer than just polishing jewelry.

When Ronna Lugosch retired in 2019, he bought the business. Then came COVID-19.

Joe Lugosch sees a silver lining of sorts to the pandemic. He said it gave him time to not only rethink his life, but also to reevaluate the business.

He did not have the same skills that his mother brought to Peapod Jewelry. She had carefully built up the tourist trade that streamed by on Route 1 while nurturing her local customers. During COVID, those strategies were harder to implement.

Joe Lugosch turned his attention to expanding the online aspect of the business: Updating the website and focusing on social media as a way to bring in new customers.

As for the jewelry, there again, Joe Lugosch had a different skill set. He brought a fresh eye to his mother’s classic design, informed by the problem-solving ability and more engineering-based design savvy he picked up from his father.

“I’ve never been able to match exactly the elegance. Her sculptural work is unbelievable,” he said of Ronna Lugosch’s designs. His own work builds on the underlying aesthetic of Peapod Jewelry and offers an approach that often takes its cue from clip art designers who take complex concepts and simplify them to their most essential parts.

Joe Lugosch has an older brother in San Francisco and a two-and-a-half-year-old nephew named Ronin who “is going to take over the world.”

He is engaged to Katie Riley, and they plan to finally marry in July after postponing their wedding due to COVID. The couple recently adopted Spidey, a three-year-old miniature schnauzer.

Joe Lugosch is making plans to act in spring productions at both Heartwood Theater and Lincoln Theater. He’s already at work memorizing lines. And one day he hopes to have the chance to play his dream role as Sweeney Todd.

“Life can turn into a blur. That’s why it’s important to take small breaks, forays into wonder,” he said. “When you see the same thing all the time you forget to see the things that are beautiful.”