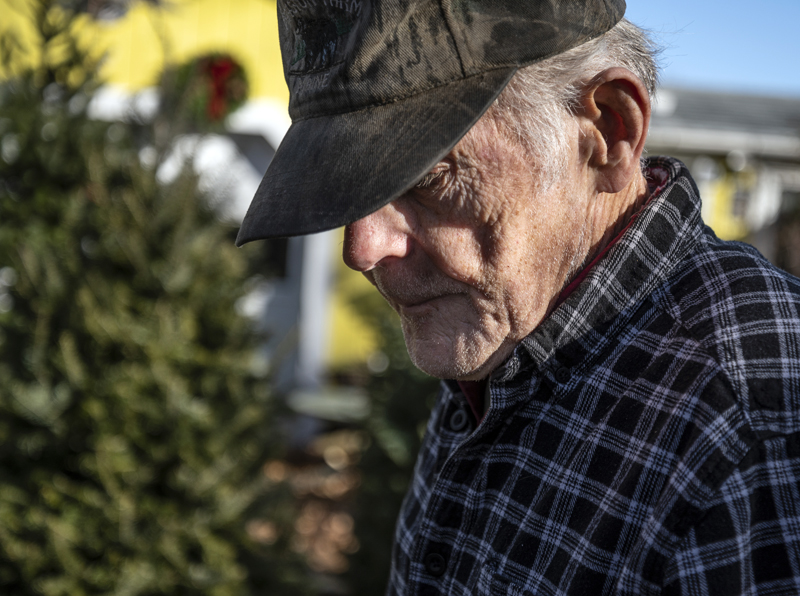 Linwood Palmer works the tree yard at his property in Nobleboro on Dec. 7. Palmer has been involved in the local Christmas tree business for more than 60 years. (Bisi Cameron Yee photo)

Linwood Palmer has been growing and selling Christmas trees since he was 13 years old. He’s 78 now and still going strong. While the days when his family grew tens of thousands of trees on vast acres of land in Nobleboro and Dover-Foxcroft have passed, he still has a loyal following at his two-acre property on Borland Hill Road.

Palmer was born in Damariscotta, the third in his family to share the name. His grandfather had a foundational role in the community – he opened Palmer’s store, now the Village Store on Center Street in Nobleboro.

Palmer’s father was active in Maine politics, serving in both the state house and senate, and running for governor in 1978. He also established Holiday Acres, one of the premiere Christmas tree farming outfits in Maine.

Palmer grew up in Nobleboro before his family moved to Massachusetts where he played football for Wellesley High School. Palmer played throughout his high school career, culminating in an undefeated season his senior year.  He played for a year at the University of Maine and was good enough to be drafted by Portland’s semipro team, the Griffins. Palmer credits his experience with football for teaching him to respond to problems or failures by “picking himself up and going again.” 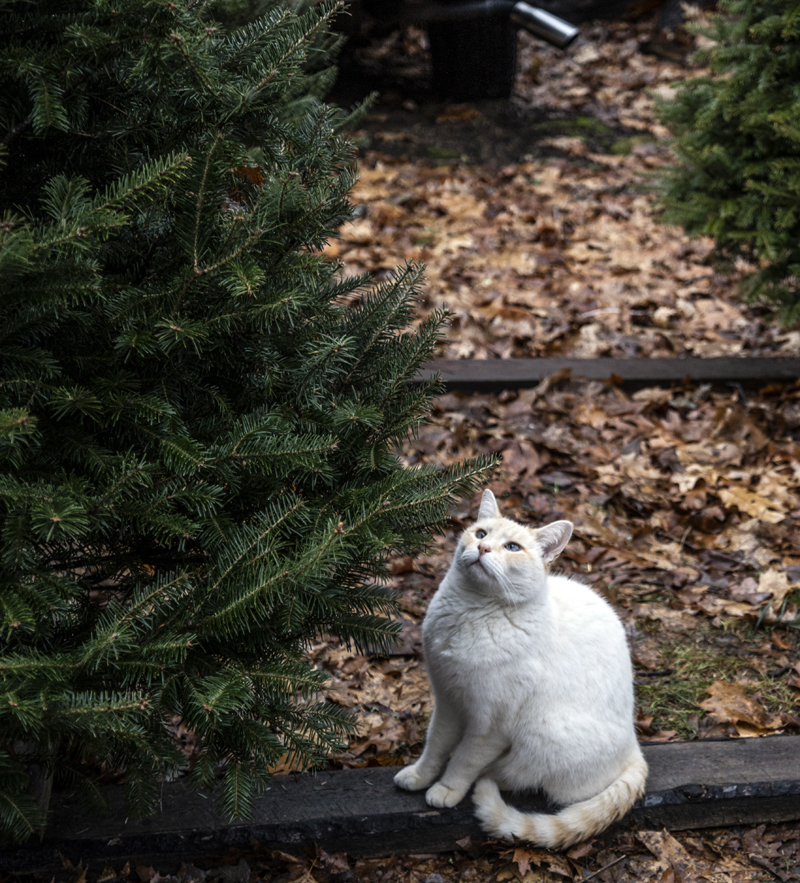 A cat admires one of the Christmas trees at Palmer’s Holiday Acres in Nobleboro on Dec. 6. Many of the trees are grown over the course of 8-9 years on the two-acre property. (Bisi Cameron Yee photo)

The family’s first tree farm was on Lower Cross Road where 20 acres were cleared to grow all natural Balsam firs. Palmer remembered selling those trees at his grandfather’s store. The stand there did better business than he does now, but he sells enough where he is, and it’s easier to work from home.

One key lesson Palmer took from his father was to remember those less fortunate. He tries to be considerate when he knows affording a tree may be a stretch for a family with limited expendable income.

The Palmer family bought a second farm in Nobleboro, 80 acres a couple of miles south of Camp Kieve. Trees were sold by the truckload, and shipped to large greenhouses in Boston and Lexington. It was so busy that Palmer’s father helped raise money to pave the dirt road so trucks would have better access.

Most of the family holdings have been sold by now, but Palmer’s small yard has been busy this year. He sells a lot of trees to his neighbors in Damariscotta Mills. Customers walk up the street, choose a tree and he brings it down to them during lulls in business.

“That’s just a good favor,” he said. Palmer still delivers trees to several of his long-time customers; some have bought from him for more than 50 years. 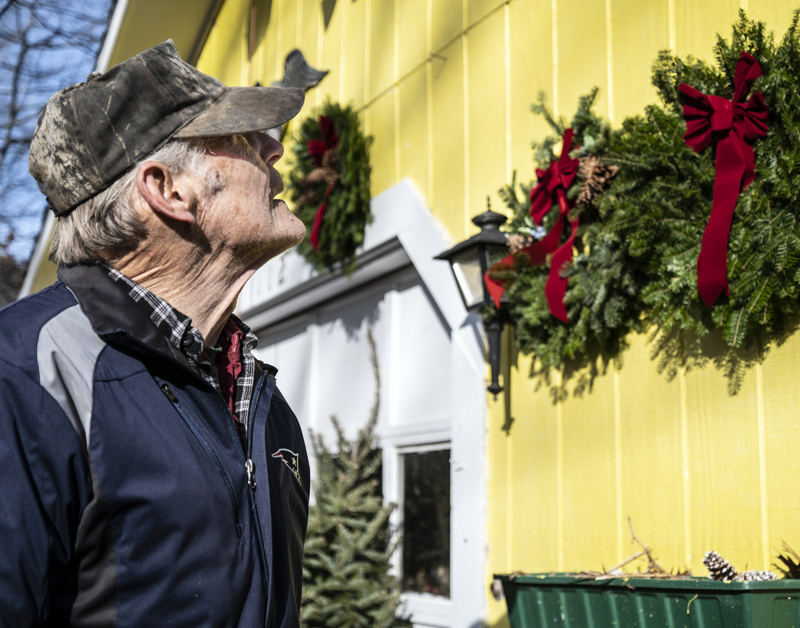 Linwood Palmer checks out the wreaths he has for sale at Palmer’s Holiday Acres in Nobleboro on Dec. 7. Palmer said the darker brick red ribbon is now more popular than a brighter red for Christmas wreaths. (Bisi Cameron Yee photo)

He has a strong following in Boothbay, as well. Handmade signs along the roadways point the way to Palmer Trees.

“Get rid of brush and let the sun in,” he said. Keeping fields easy to mow helps mitigate predatory insects. He fertilizes several times a year and lets trees grow for eight or nine years before harvesting.

Palmer grows around 300 trees at his Nobleboro home, many of them on a flat sunny area to the right of the bright yellow house, and a number of them along the wood line at the back. 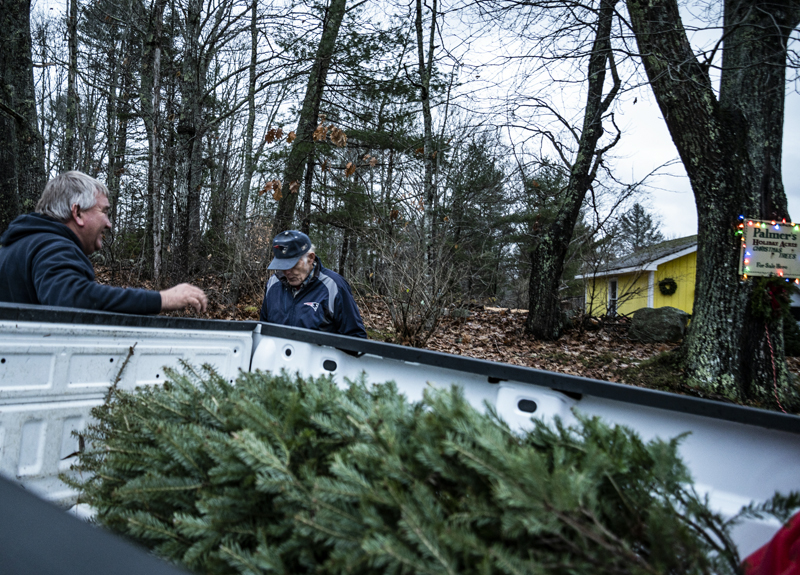 Joe Gifford, left, chats with Linwood Palmer while buying a tree at Palmer’s Holiday Acres in Nobleboro on Dec. 6. Conversations with neighbors and friends are one reason Palmer still sells trees at the age of 78. (Bisi Cameron Yee photo)

Dark green trees are grown more in the shade, Palmer said. “(And) if they have a bit of an orange tint, those are the ones that are grown in the sun.”

Palmer said many of the trees on his lot are more like woods trees, taller, not as bulky as typical field grown trees. But some grow shorter and rounder too.

Palmer doesn’t have many problems with pests – once in a while a few aphids. He doesn’t spray. He’d rather mow and keep up the land to keep the insects down and the ticks away. 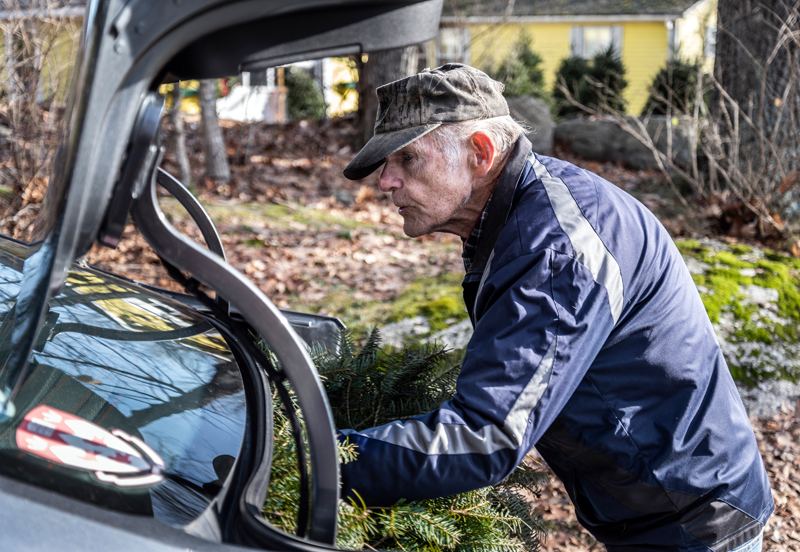 Linwood Palmer loads a tree into a car at Palmer’s Holiday Acres in Nobleboro on Dec. 7. Palmer cautions customers to be careful when removing trees from the trunks of cars, to hold the branches down so they won’t break. (Bisi Cameron Yee photo)

Palmer supplements his supply with trees from his connections in Dover-Foxcroft. While his family no longer owns that land, he still knows the growers there.

Different growers use different tools to prune and shape their trees; some use machetes, some use a device similar to a weed whacker to cut back the branches. Palmer uses hand shears to prune his trees every year.

“The proper time to trim is the end of July and August when the growth starts to harden up,” he said. “You get better results then.”

He pointed out the differences between hand-sheared and machine trimmed and how the ends of branches are cut to make hanging ornaments easier.

Palmer keeps busy outside the Christmas tree season. He has about six different businesses, from selling firewood to landscaping and clearing house lots, to plowing to raising Boston terriers. He’s a certified arborist, as well.

Palmer likened the Christmas tree harvests of his past to boot camp, walking the vast fields early in the season “when your body’s not used to it.”

It can still be exhausting work even though he has less to manage. He cuts and loads the trees himself. He doesn’t hire assistants and doesn’t need the help customers occasionally proffer. But at the end of the day as his body recovers from its exertions, he enjoys putting his feet up and watching the Patriots play. 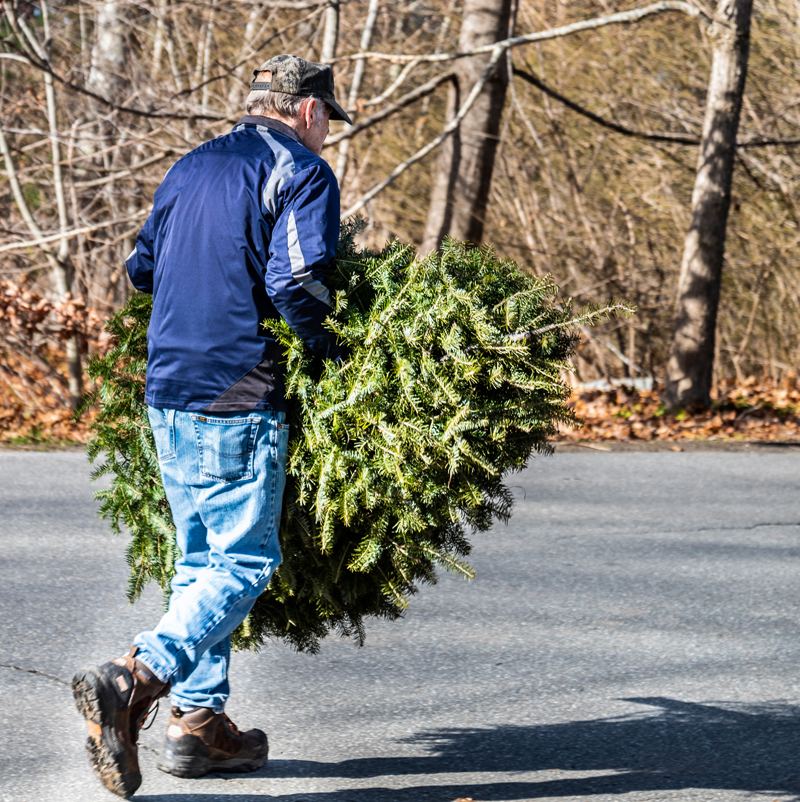 Long-time customer Joe Gifford stopped by for a tree – his wife picked it out – “that small one, right on the end.”

Gifford once worked with Palmer hauling wood. Palmer lifted the tree into the bed of the pickup, and the two leaned against the truck for a conversation.  “I come and get my tree here because I like Linny. I get to see him and talk to him,” Gifford said.

Palmer likes to talk, too. He likes to revisit the long history he has in this community he loves.

“I told my sister the other day I enjoy it,” he said. “Seeing the people come and watching the children grow up… They encourage me to keep on going.