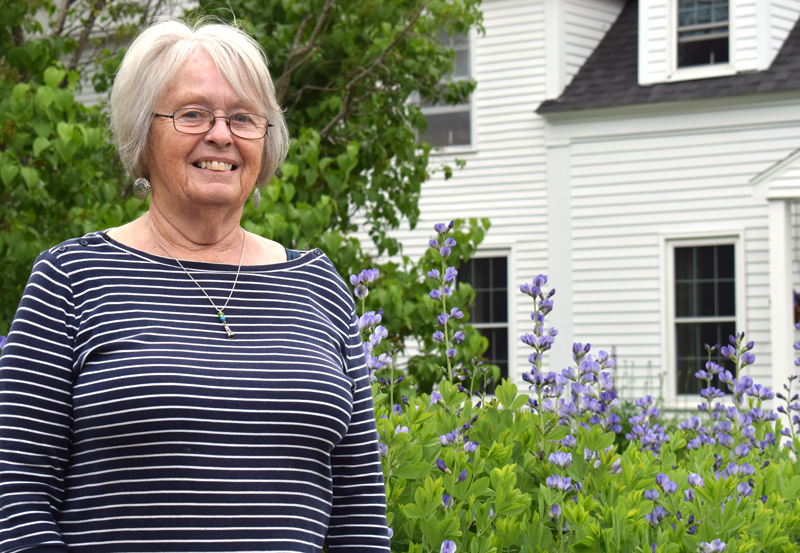 Donna Brooks stands in front of her nearly 250-year-old farmhouse in Jefferson on Friday, June 11. Brooks has served in the Lions Club International for 33 years and received one of the organization’s highest honors, the Melvin Jones Fellowship award. (Evan Houk photo)

Jefferson resident Donna Brooks has served in the charitable Lions Club International for 33 years and has dedicated her life to helping others and giving back.

“I’ve always been one to give. I think that’s part of life is to give,” Brooks said during an interview on Friday, June 11.

She is the vice president for the Whitefield Lions Club and cooks dinners, organizes golf tournaments and other fundraisers, and collects eyeglasses, cell phones, and hearing aids for those in need. The Lions Club also delivers meals to people in need at Thanksgiving time, delivers fruit baskets at Christmas, and awards scholarships every year.

The big Lions Club event for the year is on the horizon, when the club operates a burger stand at the Windsor Fair, Brooks said.

Ten years ago, Brooks received one of the highest honors from the Lions Club International, the Melvin Jones Fellowship award, which recognizes an individual’s dedication to humanitarian service.

Brooks said that the Lions Club is what takes up most of her time these days, although she also helps with collections at the Windsor-based C.B. Haskell Fuel Co.

Brooks grew up in Newburyport, Mass. on a farm as the youngest of six children. She attended the New England School of Art and Design in Boston for one year where she studied design. She met her husband Al Brooks at the school and the couple then moved to Portland in 1963.

Three years later, the couple and their two sons moved to Milford, N.H., where they started a lawn and garden equipment business and became a successful Toro dealer.

“It became a part-time thing and then it just kept growing and growing. We had to make the decision to go into it all the way, and we did,” Donna Brooks said.

Donna Brooks said her and her husband always knew they would return to the coast of Maine and buy a farm, which they did in 1985.

She said they were planning on retiring when they moved to Jefferson, but that only lasted six months. Al Brooks opened up a boat repair business, Brooks Farm Marine, with Paul Huber, and soon she became very busy with that.

After her husband died in 2001, Donna Brooks decided to keep the business going until 2017. She lives on Brooks Farm in Jefferson, where she stays in a nearly 250-year-old farmhouse and enjoys cultivating her extensive flower gardens.

Donna Brooks started substitute teaching in 1993 in Jefferson, Whitefield, Windsor, and Chelsea. She was then recruited to teach in the local alternative education program, helping kids who had been expelled to graduate from high school.

Donna Brooks worked in the alternative education program for 10 years, saying that it was challenging but she “loved it.”

“When they were handed that diploma, it was like the frosting on the cake,” Donna Brooks said.

She said she enjoyed helping the kids out of whatever rut they were in and encouraging them to get their diploma and take responsibility for their own lives.

“You need to be responsible for yourself. Whatever you do is going to follow you for the rest of your life,” Brooks said she would tell her students.

In 2015, she began working for C.B. Haskell helping with collections and going to small claims court to try and persuade people to pay their bills. She said this was also a learning experience about people and how to work with them and help them.

“Everybody beats to a different drummer and you have to acknowledge that. And you kind of have to put yourself in their shoes,” Donna Brooks said.

Four years ago, Donna Brooks met her current partner, Joe McGurk, who practices carpentry and is also restoring a 1970 Ford truck in the barn on the farm. “We both hit it off because we’re both kind of crazy and workaholics,” she said with a laugh.

Over this past winter, she and McGurk went shopping for the Jefferson Area Community Food Pantry, which was having trouble meeting the demand in the area. She then decided to reach out to summer residents on the Damariscotta Lake to solicit donations for the food bank.

“I thought that all these people who stay on the lake in the summer in Jefferson, they don’t know what goes on here during the winter months. So I started texting them,” Donna Brooks said. She said approximately $2,200 was then raised for the food pantry.

Whether through alternative education or aiding individuals in paying their bills, Donna Brooks has always been focused on helping others.

One of her favorite stories from her time in the Lions Club involves a man who could not afford the $5,000 deductible for an eye operation that would prevent him from going blind.

By making a few phone calls, she was able to raise the money for the surgery through the Lions Club. She said she heard the operation was a success and never heard anything more about it for several years.

Then, one day at the alternative education program, she met the janitor working at Somerville Elementary School where classes were being held and introduced herself.

It turned out that the janitor was the man who had the eye surgery.

“He grabbed me and hugged me and said ‘I’d be blind today if it wasn’t for Lions,’” Donna Brooks recalled emotionally.