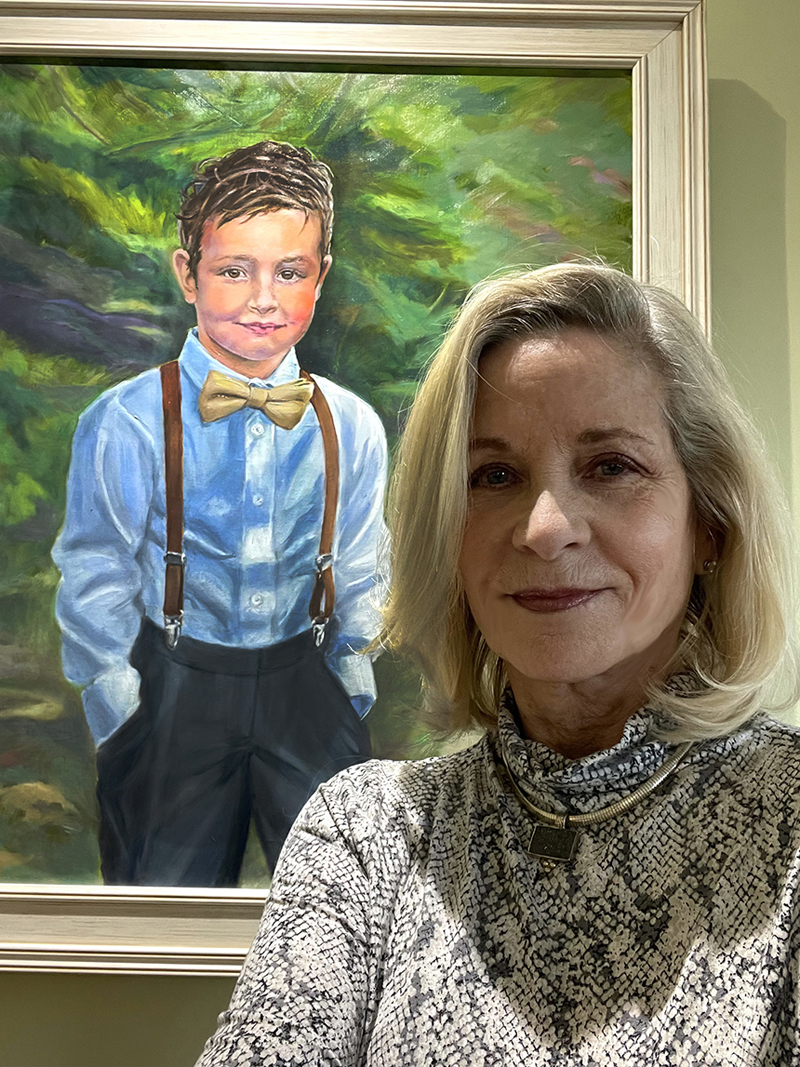 Damariscotta artist Ruth Monsell stands next to one of her recent oil paintings. (Photo courtesy of Ruth Monsell)

“I was one of those kids that always got in trouble drawing in class when I wasn’t supposed to,” Monsell said. “When my teacher took away my paper they didn’t take away my pencil so I would draw on the desk.”

Monsell became known for her artistic skills in her high school, drawing for the school paper and creating seasonal decorations on the building’s massive windows.

Since 2001, Monsell has lived in Damariscotta and sold her art online. Known for her portraits in charcoal, pastel, and oil, Monsell specializes in silhouette cutouts. According to her website, Monsell is one of about two dozen active silhouette artists in the country.

Monsell nurtured her talent as an artist through education, earning a bachelor’s degree, studying art history at Illinois Wesleyan University. She also attended Nottingham University in England, during her junior year.

While Monsell is primarily known as an artist, she is also has a passion for music and drama.

“When I was 14, the theater bug bit me,” she said. “I had a friend that had to go audition for this play and begged me to go with her, and so I did. When I got there the director told me to go up on stage and audition.”

Monsell got the lead role in the play after that audition and has been acting off and on ever since.

Currently Monsell is preparing to portray Frances Perkins, in a play called “Only Woman in the Room,” written by Teralyn Reiter, a Damariscotta resident. Perkins, who had a home in Newcastle, is a former U.S. Secretary of Labor, and the first woman to serve in the presidential cabinet in U.S history,

Monsell is one of three actresses portraying Perkins, each at a different moment in her life. Monsell portrays Perkins during her time in President Franklin D. Roosevelt’s cabinet between 1933 and 1945.

Dates for the play are set for July 15, 16 and 17 at the Lincoln Theater in Damariscotta. Reiter is directing the play. The play is expected to run approximately 90 minutes.

“I get to close the play portraying her,” Monsell said.

Passion for music also began at an early age for Monsell. At the age of four she wanted to take piano lessons.

“My older sister was going to start piano lessons and the music teacher came to the house,” Monsell said.

The piano teacher declined to teach Monsell because her hands were too small, but he agreed to give her singing lessons when he came by.

After participating in church choir at the age of seven, Monsell didn’t take private voice lessons again until she was 15.

Even embracing the arts Monsell was able to raise two kids and have a 16-year career as an English teacher. Monsell taught periodically beginning in 1975, retiring from teaching in 2001.

More about Ruth Monsell and her art can be found at her website: artfulheirlooms.com.

The Frances Perkins Center can be found at francesperkinscenter.org.