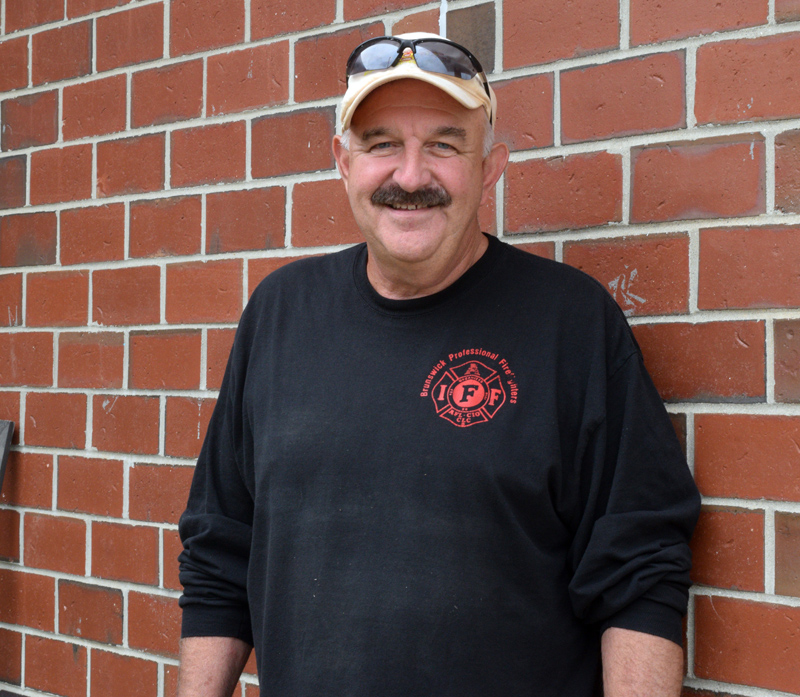 Mark Hagar stands outside Great Salt Bay Community School in Damariscotta on Monday, June 27. In addition to founding Hagar Enterprises Inc., Hagar served on the Great Salt Bay Sanitary District Board of Trustees for six years, the Damariscotta Select Board for 12 years, and currently works as the facilities manager for GSB. (Evan Houk photo)

After a lifetime of service to Damariscotta and surrounding communities, Mark Hagar recently stepped back from the Damariscotta Select Board and reflected that he would like to see more people involved in community service and town government.

“It’s a privilege to serve. I think it’s important that we open that up and show our younger kids here with student council what that’s like,” Hagar said during an interview outside Great Salt Bay Community School in Damariscotta on Monday, June 27.

Hagar, who was born in Damariscotta and grew up in Nobleboro, got his start in community service on the student council at Lincoln Academy in Newcastle, where he graduated in 1979.

“You’ve got to get involved if you want to be part of the process,” Hagar said.

In addition to his extensive volunteer work, Hagar founded Damariscotta’s Hagar Enterprises Inc. in 1987 as a landscaping and rubbish removal business that his sons have grown into a multi-million dollar construction and paving business.

Hagar has instilled lessons of helping others, mutual respect for neighbors, and involvement in local affairs to all three of his children — Seth, Justin, and Katie.

“It’s like I’ve always said to my kids, ‘you just treat other people like you want to be treated and you’re going to be fine,’” Hagar said.

Mutual respect for one another and remaining open-minded is a key to moving things forward in local government, Hagar said.

“There’s going to be times we disagree, but you have to work through that,” he said.

Hagar said that growing up in Nobleboro, he always looked up to the Damariscotta Select Board because they were “more active” and had a business district in town.

After a stint in Key Largo working at the exclusive Ocean Reef Club, Hagar returned home and built a house in Damariscotta with his former wife, Cindy.

“Having a business and working 100 hours a week is pretty tough going,” Hagar said.

He noted he is a “workaholic” like his sons Seth and Justin, who bought the family business in 2004.

Hagar currently works at Great Salt Bay Community School as the facilities manager, where he started 15 years ago. The job has allowed him to see his grandchildren go through school.

“As long as it doesn’t feel like a job, I’ll keep doing it,” Hagar said. “I’ll always do something.”

Hagar’s push into Damariscotta government came at a time when he said he was young and “a little arrogant,” he said. He saw something that didn’t seem right and helped start a petition to change the town’s select board from three members to five in the early 1990s.

“What I saw happening in this town was you had a three-member board and then you could see that two of these people would be at the local diner making decisions,” Hagar said. “It was discouraging because they had already made up their minds and the third board member was left out.”

He said he is very grateful to have served on boards with people like R.H. Reny and Frank Avantaggio, who taught him a lot about how town government works.

Hagar served on the Great Salt Bay Sanitary District’s Board of Trustees from 1990-1996, seeing the water district through an expansion on Biscay Road and to Great Salt Bay Community School.

He personally paid for a pump station and to extend sanitary district lines from the Biscay Road intersection to where Damariscotta Dialysis is now. He said this is simply part of his core ethic of engaging in public service and helping other people.

Hagar was first elected to the Damariscotta Select Board in 1996, serving until 2000. He was elected again in 2016 and finished his second consecutive three-year term this year.

During his 12 years on the select board, Hagar has always been focused on long-term planning and is a believer in “letting the town manager do his job” dealing with day-to-day administrative duties.

Hagar would like to see a long-term roads program set up, to rebuild and maintain town roads on a rotating basis. The town used this method to rebuild Back Meadow Road in phases during Hagar’s time on the board, he said.

“That’s been years because it was done properly,” Hagar said of the quality of the road. “In the long run, it’s actually cheaper.”

Hagar also served on the town’s solid waste committee, helping to develop a solid waste ordinance that allowed the town to pay the Nobleboro-Jefferson Transfer Station per population for town residents to use the facility.

“Being a service center is always something that keeps coming back, and it’s still coming back today. The town of Damariscotta ends up paying for a lot of services for the whole county that we use,” Hagar said.

Hagar noted that serving on the select board is a serious commitment that those interested in volunteering their time should consider.

“It’s not just show up on Wednesday night. You should to do a little research,” Hagar said.

Ever on the move, in his recent retirement from government affairs, Hagar is looking into the future with another community-oriented goal in mind – to start delivering food with Meals on Wheels.

“Some of these elderly people, they’re in their houses and they don’t see anybody for periods of time,” Hagar said. “They always look forward to someone to come bring them lunch and have a few words with them.”

“I think the big thing is community service,” Hagar said.