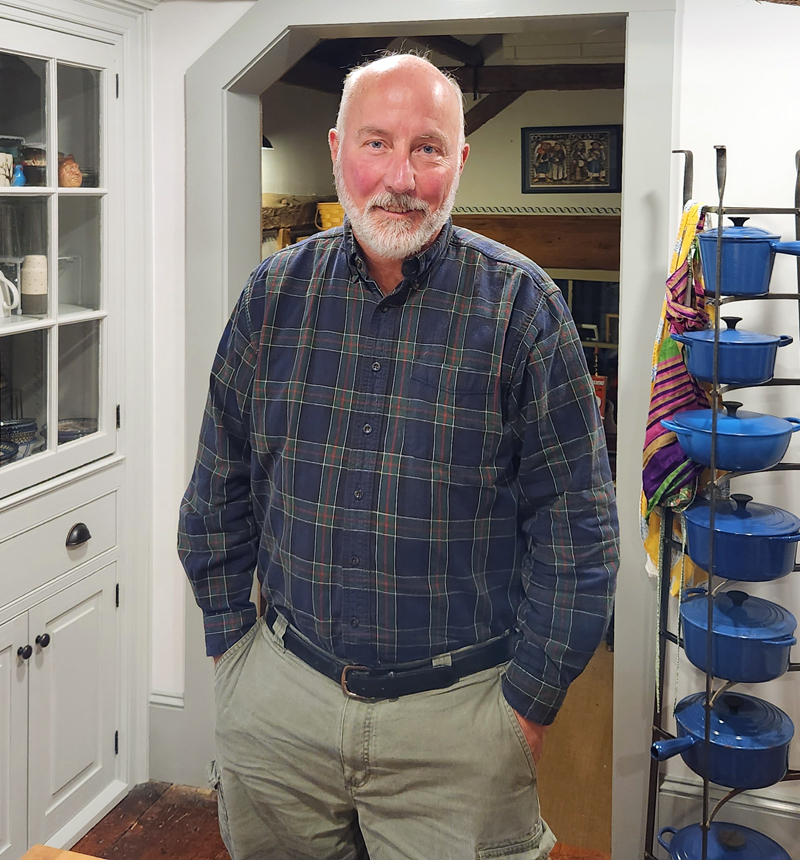 Mark Ziarnik, in his New Harbor kitchen on Thursday, Sept. 22. During his professional career, Ziarnik worked on dozens of projects that manufactured products uses by NASA for space exploration. He is currently the president of the Old Bristol Historical Society and a board member of the Damariscotta based Midcoast Unitarian Universalist Fellowship. (Alec Welsh photo)

“I don’t believe I ever have,” the Bristol resident said when asked if he had a direction for his career. “Some people have a real focused goal on what they want to do and who they want to become. I had an interest in trying new things and working with people.”

Working for Hamilton Standard in Connecticut, Ziarnik managed dozen of projects including the development of the solar panels and cooling system for the Parker Space Probe currently orbiting the sun.

“It’s flying through the sun’s corona studying the physics, the solar wind and things like that,” Ziarnik said.

The probe’s mission required a close orbit around the sun, meaning the solar panels Ziarnik’s team designed had to be cooled off during orbit to prevent them from overheating.

“We built these titanium panels, and inside these panels are little channels that flow water through them to keep them cool,” Ziarnik said.

“They had a huge chamber that had electric heaters and they position our stuff in it, pumped the air out to create a vacuum, and tested it there,” Ziarnik said.

Ziarnik retired a little more than a year before the probe’s launch in 2018.

He began his career at Hamilton Standard, at an entry level position ordering parts for products to be later assembled. Ziarnik ultimately spent 34 years with the company, leading dozens of projects that contributed to NASA’s exploration of outer space.

“I was involved with making space suits, equipment that went on the space shuttle, equipment for the space station, and a variety of satellites,” Ziarnik said.

Later, as a project manager, Ziarnik was responsible for making sure his teams had the resources they needed to stay under budget and on time and he worked to troubleshoot issues that arise.

“Working together with teams to solve those problems was rewarding,” Ziarnik said. “Not having an original or technical degree there, and working in a technical environment like that, I had to really listen and involve the right people in doing the job.”

Graduating in 1980 from Bucknell University in Lewisburg, Pa., with a B.A. in Economics, Ziarnik was not an expert in engineering, chemistry, or other subjects related to building products used in space exploration.

“The one thing that was nice about taking economics was there were a lot of electives you could take,” Ziarnik said. “So I could take a lot of classes that were of interest to me.”

Throughout his career with Hamilton Standard, the company encouraged the pursuit of higher education, Ziarnik said.

“They would pay 100% of tuition, it did not need to be work-related,” he said. “They paid for your books. They would pay for time off to study, and if you graduated with a degree they gave you a $10,000 bonus.”

Taking advantage of the opportunity, Ziarnik earned an associate’s degree in computer science from Northwestern Connecticut Community College and went on to receive master’s degrees in management and business administration from Rensselaer Polytechnic Institute in Troy, N.Y.

Collaboration throughout his career is not the only human connection Ziarnik sought during his life. Traveling with his wife, Penny, Ziarnik found human connections in the unlikely world of sports.

Shortly after retiring around 2016, Ziarnik and his wife found themselves at a pub full of Scottish soccer fans in Dublin, Ireland.

“We are not sports fans in particular, but you enjoy what they are doing in the town or country you are in,” Ziarnik said. “They were so excited they had all their paraphernalia on, and music playing and they had their football cheers they would shout.”

Four years prior, the couple was able to witness Germany winning the World Cup against Argentina while drinking at a pub in Munich. “Germany won at the end on penalty shots and the whole town just went crazy,” Ziarnik said. “Much of the fun of foreign travel is just getting experience with the people.”

Living in the community, it didn’t take long for Ziarnik to find the human connections he has consistently sought throughout his life. Working the ticket booth at Pemaquid Point, Ziarnik met travelers from all over the world.

“It was an extraordinary experience,” he said. “I had not fully appreciated how big of an international draw this place has.”

Currently, Ziarnik is the president of the Old Historical Bristol Society and on the Board of the Midcoast Unitarian Universalist Fellowship, in Damariscotta.

“I am not a historian or an expert at the church,” Ziarnik said. “What I like to be able to do is enable the people to do what they want to do effectively.”

Ziarnik is the father of three sons and celebrated his 40th wedding anniversary with Penny last June. He currently enjoys trying cooking new food and dining out with Penny once a week.