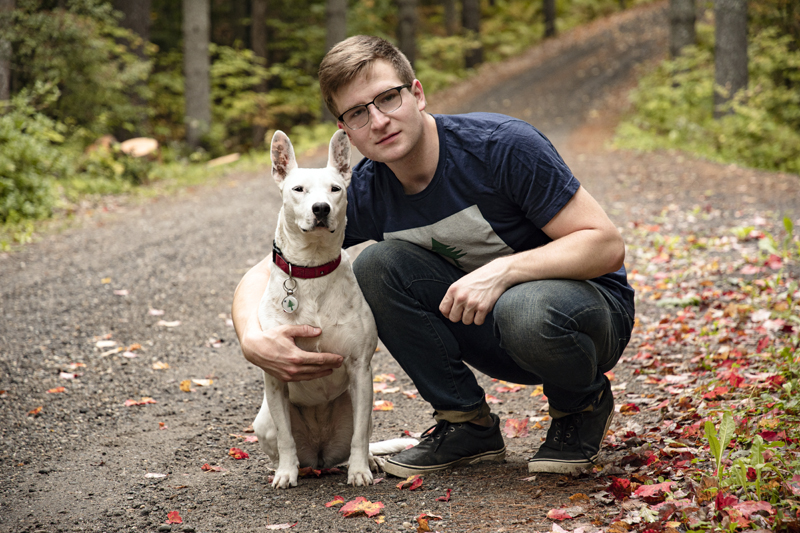 For a few hours every week, Dmitry Pepper records his dog Biscuit dancing, talking, and twerking, much to the enjoyment of the duo’s 7.4 million followers on the social media app TikTok.

Pepper, of Whitefield, is the man behind MisterMainer, the most-followed Maine TikTok account. The account’s star, however, is 7-year-old Biscuit, who Pepper’s family adopted from Georgia via Underhound Railroad in 2015. A mix between English bull terrier and whippet, Biscuit is a loving, personable dog and faithful companion.

“Wherever you are, that’s where she wants to be,” Pepper said. “She loves cuddles and follows you everywhere.”

Everywhere includes social media. Pepper has had a TikTok account for quite some time

“I was just posting videos here and there about Maine scenery because I’m really proud of being a Mainer,” Pepper said. “I would make a video here and there, but that was it.”

This changed in January 2021, when Pepper uploaded a video of Biscuit that “blew up,” resulting in a sharp increase in followers.

Pepper, along with his friends and family, first thought this was a one-time viral moment.

“We all thought it was a ‘15 minutes of fame’ thing, but I kept at it and people stuck around,” Pepper said. “And everyone has been really supportive. They’re happy for me, happy the family dog is so popular, and happy that she’s bringing joy to people around the globe.”

As Biscuit’s popularity grew, Pepper debated changing the name of his TikTok account before ultimately deciding to stick with it. He now has MisterMainer accounts on TikTok, Twitter, and YouTube, and MisterMainer1 on Snapchat and Instagram. He crossposts content across platforms, such as takes on popular trends.

“There are these certain viral trends, but it’s just humans,” Pepper said. “But when it’s a dog, with her ears … I think that’s why the content stands out.”

Pepper has a strong background in multimedia work. After graduating from Lincoln Academy in 2015, he attended Hampshire College in Amherst, Mass., where he majored in photography and music, studies that both contribute to his social media success. Pepper enjoys composing original music, which he has incorporated into some of his TikTok videos.

Pepper currently works as a production assistant with Florentine Films and recently started as a photographer with Volunteer Maine. He’s able to supplement his income through TikTok. “It’s a good living wage at this point,” he said.

In addition, Biscuit is now an ambassador for the TaakoBoutIt Dog Essentials, and can often be seen wearing the company’s harness, collar, or other products in the videos.

As the COVID-19 pandemic continues, Pepper said he’s realized just how important finding and spreading joy can be.

“Almost every day I get a message or a comment saying my video made someone happy or brought joy into their day. I have certain accounts I follow because they make me happy, so I know how important that can be to find that joy,” Pepper said. “It makes me happy to know I’m making people feel good.”

As someone who once wondered how to gain followers through social media, Pepper advises that content creators make what they love.

“Don’t be afraid to try new trends and follow people, but post what you enjoy,” Pepper said. “You have to try not to let it get to you, and remember that it’s fun.”

Many of Pepper’s followers have asked him if Biscuit knows she’s internet famous. While he’s unsure about that, he does know one thing.

More information about MisterMainer and Biscuit can be found at mistermainer.com, while Pepper’s other multimedia work can be viewed at dmitrypepper.com.