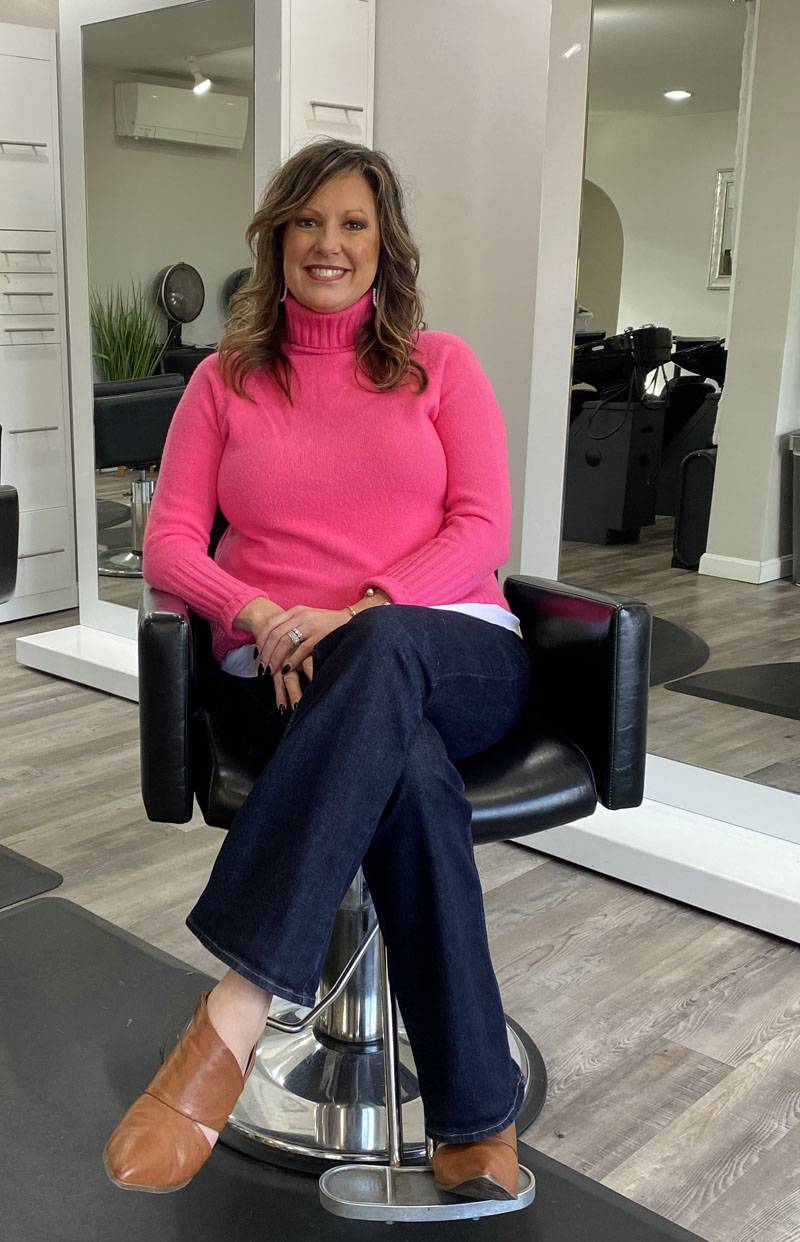 Growing up in Tenant’s Harbor, Mia’s Shear Perfection owner Mia Feltis never dreamed of having a day job. Like most young people, she didn’t give much thought to having a family, or a career, and she certainly didn’t worry much about building a successful business.

Feltis would eventually create and maintain all of those things, but for much of her time in high school, the then Mia Lombardo had a much clearer, simpler goal in mind.

A three-sport star at Georges Valley High School, Feltis played soccer and softball, but she lived for basketball. Starting in grade school, she was an all-star right up to the end of her career. Playing center, she easily broke the 1,000-point threshold for Georges Valley, finishing up around 1,400 points for her career.

Feltis said she was never the fastest, the strongest, or the biggest, but she worked hard. She loved the game and she loved to put the time in.

“I wasn’t an A student by any stretch but I think the sports kept me focused,” Feltis said. “I worked really hard because that’s what I wanted to do.”

Eventually growing to a height of 6 feet, depending on who was measuring, Feltis enjoyed a size advantage over many of her peers. Coaches moved her inside early and she worked hard to become a dominant center. “I was always the tall girl and I think that led into my role,” she said. “It is brutal (inside), but I loved it so much.”

Feltis recalled a gauntlet of all-stars she competed against during her high school career, citing Margot Bailey, of Erskine Academy, Rebecca Fletcher, of Dirigo, Susan Ware, of Rockland, and Alice Bishop and Laurie Styles, of Medomak Valley.

“It was those girls, those were my competition and we battled,” Feltis said with feeling. “Of course we laugh about it now … I miss the Mid-Maine Conference. It was really cool. It was all the schools around here that played against each other.”

Although she did not ultimately make the team, Feltis did have a chance to perform for coaches at the University of Maine. In the summer of 1995, before the start of Feltis’ senior year, UMO invited her to a basketball camp in Orono. Feltis had already attended two camps that summer, but she had no problem attending a third.

“They had one opening and they wanted to have me come and basically see what I had to offer,” Feltis said. “I think they just wanted to look at some of the people in the state of Maine that could potentially help their team. I went and gave it my all and felt good about it, and it just wasn’t for me.

“It was like a little kid being heartbroken,” Feltis said. “It’s hard. It was a dream that I had.”

By that point Feltis had already determined a career in a dental office was not in her future. At the same time, she realized she loved the game as much as ever, but she hadn’t grown up dreaming of playing Division III basketball. She ended up leaving the team and the school before her freshman season.

“I realized I wasn’t going to the NBA playing basketball as much as I would have loved to have,” she said.

Feltis did leave school having met the man who would become her husband, Kevin Feltis. They would marry in a couple years, and eventually welcome Kaitlyn and Kolby to their family, but at the time, Mia Feltis felt the burden of unmet expectations weighing heavily on her 19-year-old shoulders.

“I felt like I was a little bit of a disappointment,” she said. “That’s how I felt. What are people going to say? I didn’t even finish college. Everybody knew me and I think they all expected (more).”

It was during this period that Feltis made the decision that would shape the course of her life. She decided to go to cosmetology school. At the time, Feltis said it wasn’t so much a career move as much as a plan to create some options for herself.

“It was a nine-month course – 1,500 hours,” she said. “I figured if I wanted to go back to college, I could pay my way back and do hair on the side. I decided that’s what I was going to do and I did it and I found I really enjoyed it. I loved it and here I am today. I’ve been doing it for 23 years now.”

Feltis had an aunt who was part owner of a salon in Rockland. She started there, and moved to Bristol within the year, closer to her husband’s family, and took a position at Eleanor and Anita’s Salon. Formally located in ground level of the Damariscotta Center building, Eleanor and Anita’s was a landmark business that served as a proving ground for generations of cosmetologists. The business closed in late 2020 after 31 years.

“It was great,” Feltis said. “It was a nice little family. It was the salon in Damariscotta. It was the place to go. I met a lot of people at that salon.”

After a few years, Feltis took her skills to Damariscotta Hair Design. Eventually, heeding her mother’s advice, she went into business for herself, opening Mia’s Shear Perfection in 2003. She rented space for five years, before building in her current location at 161 Church St., Damariscotta, in 2008.

Despite being well established with a large clientele, Feltis still works as hard as ever. Twelve-hour days and 80-hour workweeks are fairly standard.

Whatever thoughts Feltis might have had about stepping back were temporarily derailed by the COVID-19 pandemic. Mia’s Shear Perfection ended up closing for six weeks at the height of the pandemic in 2020.

“We had to cancel over 300 people, 300-400 people in that amount of time, just not knowing,” Feltis said. “I kept saying we are going to reopen back up on this day. My husband was saying ‘you can’t put a time on a pandemic.’ I was saying ‘yes I can, I have control of this.’ I was really worried.”

“I got to spend quality time with my kids,” she said. “We stayed up late playing games.”