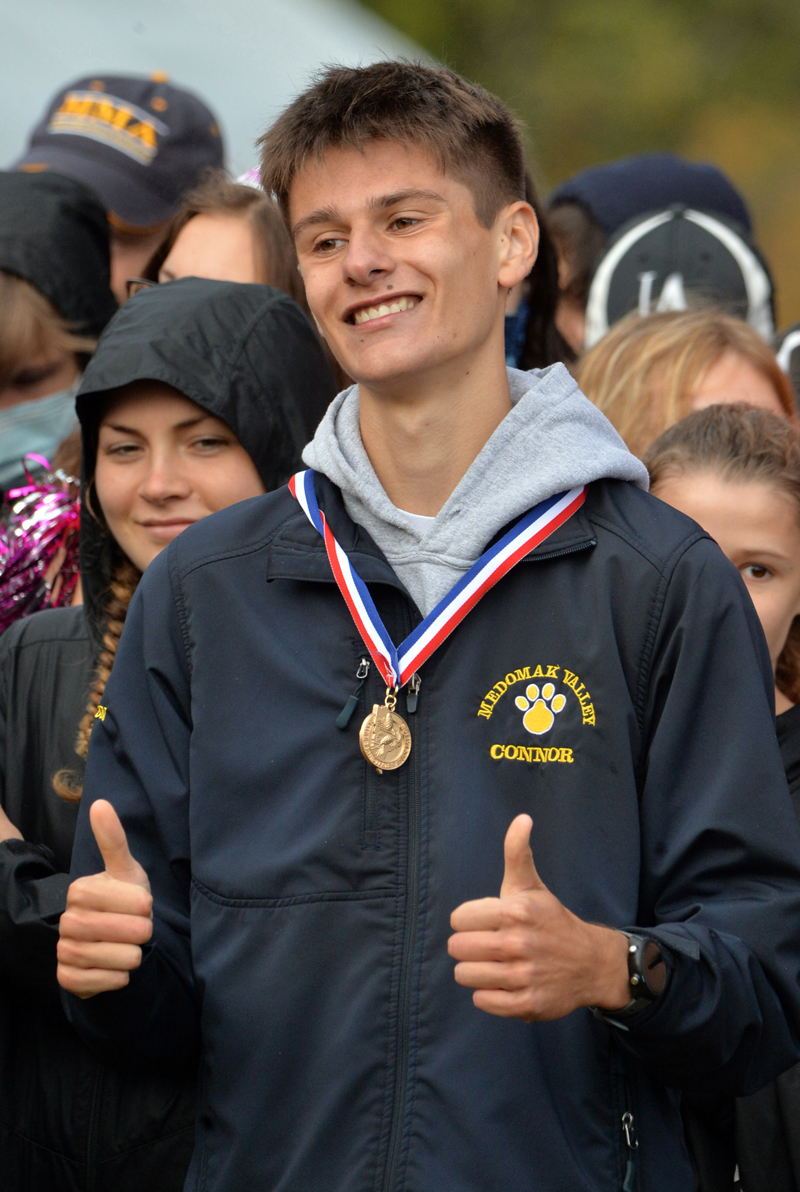 For Medomak Valley High School graduate Connor Daigle, running wasn’t always in the plan but is now one of the biggest parts of his life.

Daigle, 18, started his running career in the eighth grade as an attempt to stay in shape for the basketball season. Coaches had Daigle compete in the mile and the rest is history. From then on he was hooked.

“Running is a unique sport – you know just getting that first feeling of accomplishment after that race – that’s when I kind of fell in love with the sport,” Daigle said. “Seeing that self-improvement, seeing how much I can get out of my body, you know, training hard every day. It’s very rewarding.”

Fast forward five years and Daigle is going into his freshman year as a Maine Black Bear working toward a degree in kinesiology with a minor in psychology, while also pursuing running. Daigle was recruited to the University of Maine Orono program for his running talents, but he chose to attend because he felt that the school offered the best of both worlds.

“I was recruited to run in college, so that played a factor in choosing a place to go, but of course you want to find a school that fits you academically,” Daigle said. “UMaine was a great fit for me athletically and academically.”

Daigle had nothing but nice things to say about his teammates and cross country program at UMaine.

“You want to make sure you’re around other people who can lift you up and encourage you to be the best you can be,” Daigle said. “Here at UMaine I love my teammates. We all lift each other up and hold ourselves accountable towards our team goals. But with running it’s a team sport, it’s a team of individuals. You need to make sure each member is doing what they need to do individually to make sure the team will be successful.”

Though Daigle is competing at the collegiate level, he hasn’t forgotten where he came from. For him, his greatest memory as an athlete at MVHS wasn’t physically running, but rather mentoring those who were coming through the ranks after him.

“My favorite memory probably will have to be my senior year,” Daigle said. “I volunteered a lot with our middle school cross country program and a lot of them looked up to me. Just mentoring younger athletes within the community. It’s really rewarding, encouraging, and inspiring other people to do the sport I love that’s what it’s all about.”

For every athlete there are people in their lives that have helped them along the way and that inspire them to be better, and for Daigle, firstly it was the godfather of Medomak Valley distance running, George Gould.

“If you’re a distance runner at Medomak, George Gould has definitely touched you in one way or another,” Daigle said. “He is just a great role model, a great leader, a great friend, a great mentor.”

Daigle also made special mention of Maine running legend Ben True, saying he drew inspiration from True’s workouts, as well as getting to speak with him at a recent meet at Dartmouth.

Sam Mills, who is one of Daigle’s current teammates with the Black Bears, was another source of inspiration for the MVHS alum.

“Just how dedicated he is to the sport of running and the way he goes about his training is definitely something that I want to model after,” Daigle said. I really look up to and respect Sam Mills.”

Daigle currently holds the two-mile record at the Medomak Valley High School course with a 9:27 finish, a record that will likely hold strong for some time to come. He won the state 3200m race in track and the state Class B cross country championship in 2021.

Daigle humbly shared his proudest accomplishment in his high school career, one of which was no easy feat. Daigle brought home the state Class B title in cross country on a muddy course in 16:35.75.

“My proudest accomplishment throughout my high school career was probably the state meet,” Daigle said. “I fell down six different times and I was still able to win the state title. It was a race of true grit.”

Daigle is no stranger to adversity. Throughout his senior cross country season Daigle was fighting a battle that no one could see – the development of an eating disorder. Pairing not getting the right nutrients into his body with the overtraining that Daigle was partaking in, he developed a stress fracture in his knee. This, however, wouldn’t stop him from participating in New Englands despite the pain he was experiencing.

He took this down time and turned it into something positive.

“Finding who you are as a person without running and getting your mind straight and, you know, realizing running isn’t your whole life,” Daigle said. “Making sure you’re not just going to college for running was a good lesson too and I was able to figure out who I wanted to be after running.”

Establishing an identity outside of their sport is something that Daigle would encourage all athletes to do, as he emphasized recognizing the bigger picture.

“Put your love and enjoyment for the sport before anything else. The times and championships will come, just stay patient, put in the work and more importantly have fun with it,” Daigle said. “It’s your journey. Make sure it’s a fun one.”