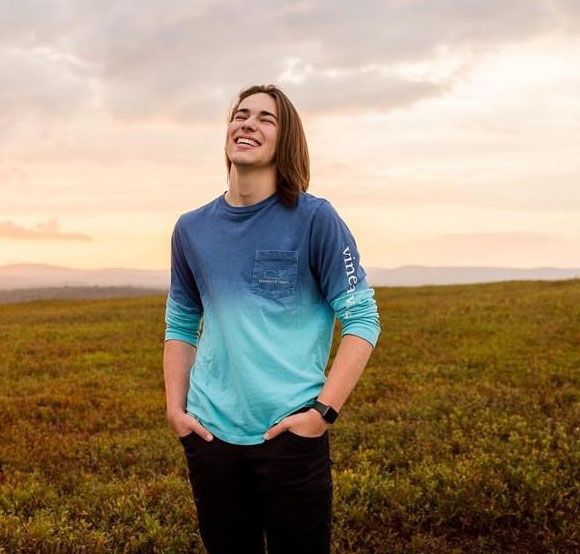 “I have no idea,” Medomak Valley High School senior Owen Weber said when asked about his focus for college. Weber will be attending Yale University in the fall.

“I am super into English and writing and reading, but I also have a really strong math career and it makes it really hard to decide,” said Weber. “Just recently I started to learn about environmental science and Yale has a mathematics program I might want to try.”

“I could not possibly decide right now,” said Weber.

Weber is part of the school’s math team, competing in competitions solving math problems as individuals and as a team. Specific math subjects covered high school subjects up to calculus.

“It pretty much ranges everything through precalculus,” said Weber. “Nothing you should need calculus for.”

There are five competitions throughout the year and each competition is divided into six parts with five questions solved by individual team members before the last question is solved using teamwork.

Throughout high school Weber engaged with the arts through acting and music. He plays the flute, tenor saxophone, and the trombone.

“I’ve played flute since I was in fifth grade, tenor when I was in eighth grade and I started playing trombone my sophomore year,” said Weber. Weber taught himself how to play the trombone.

“I purchased the books people would usually use in like elementary school and progressively went up from there,” said Weber.

Weber’s first acting experience came in third grade when a group came and put on a musical in one week. He participated each year they returned through sixth grade. In high school he annually participated in the musical and one act competition. Even the threat of the COVID-19 pandemic didn’t deter Weber from participating in acting.

“We had a virtual performance the year it hit,” said Weber. “The next school year we were able to do three in-person performances, which was really great. It was not ideal to do these things in mask but we made it work.”

Outside of school, Weber likes to ski in the wintertime. At the age of 14, Weber earned the rank of Eagle Scout.

Despite participating in the arts, competing with the math team and spending three months studying for the SATs, Weber found time to participate on the RSU 40 Board of Directors as a student representative.

“The commitment was only twice a month,” said Weber. “It did add on a lot and it also gave me a chance to do something that was important to me advocating for the students.”

Weber’s time on the school board had moments of controversy. Recently members of the public attended RSU 40 school board meetings to protest the existence of two LGBTQ themed books in the library.

As a student representative, Weber openly advocated for the books to remain in the library, in the face of a passionate older opposition. Weber said that he is not afraid to speak his mind and thinks people are going to disagree with him no matter what.

“I am raising awareness to those that might agree with me but stay quiet otherwise. I’m helping people who are on my side and should be speaking out on these issues” said Weber.

Weber will graduate from MVHS on Wednesday, June 8.