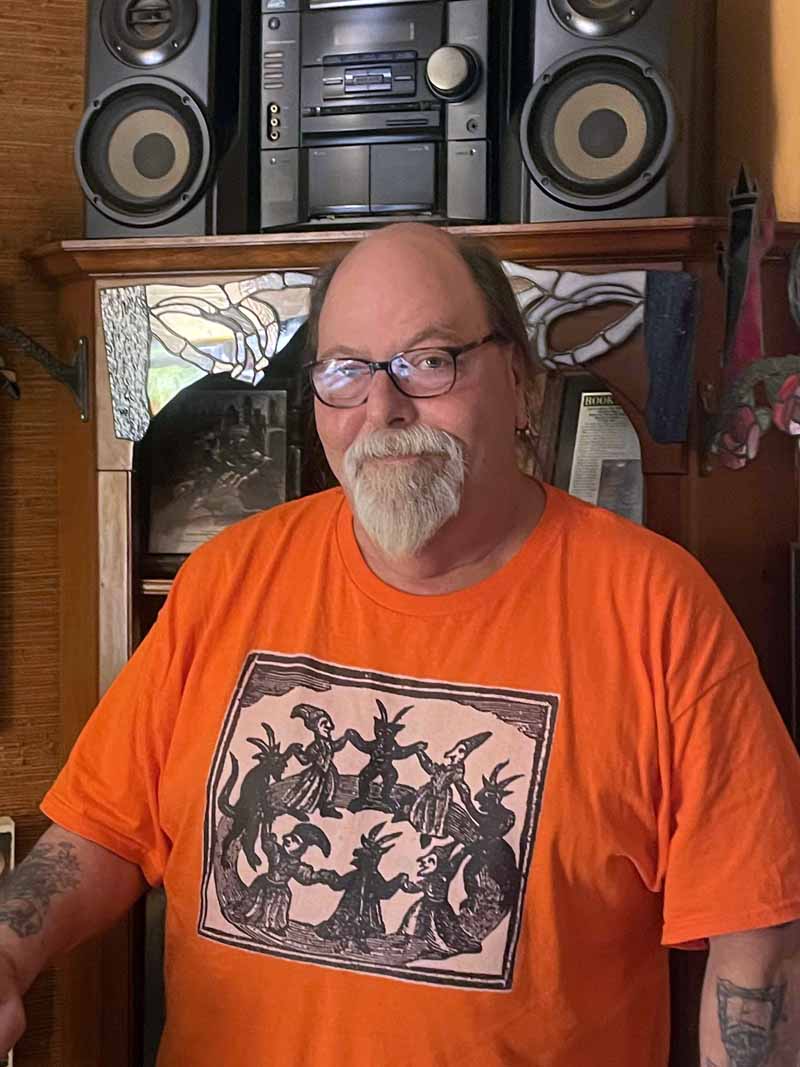 After 40 years of working at it, Newcastle illustrator Glenn Chadbourne has achieved a kind of celebrity. As anonymous as the private citizen to the world at large, within the niche world of horror illustrators, Chadbourne has developed a devoted following.

Chadbourne’s status has been helped no doubt by his long association with Maine icon Stephen King. Chadbourne has been King’s illustrator of choice since Chadbourne turned King’s “Secretary of Dreams” into a graphic novel, which was published in 2006.

“I’ve fulfilled a lifelong dream,” Chadbourne said. “I could konk tomorrow, happily. I’ve done pretty much what I wanted to do. I don’t make a fortune. I make a middle income wage, but I get to sit here on my tuffet and do what I love.”

Although he is firmly established now among the two dozen or so illustrators and artists who make a living specializing in the horror genre, Chadbourne asserts it is a matter of luck that he is where he is professionally.

“I had no plan,” he said. “I have no choice in this. I just drew. If I was homeless and living in a box, I would open a vein and draw on cardboard. It’s just in me. It’s like breathing, honestly.”

As with his art, Chadbourne said his predilection for horror is something that comes naturally to him. As a withdrawn, only child, he took to reading and art early. Once a month, local stores would put out a selection of Warren Publishing magazines with titles like “Creepy,” “Vampirella,” and “Famous Monsters of Filmland.”

“I just devoured those along with the comics,” Chadbourne said. “Probably at a very young age, probably 9 or 10 … I started to draw all the little creatures. I was an only child. This street was completely different then, so I drew.”

Early on Chadbourne knew what he wanted to do but he didn’t have a cogent plan for getting there. He produced and sent illustrations by the dozens and collected his share of rejection slips. He wrote, illustrated, and published a couple comic books, which sold just well enough to break even.

“I sent stuff out for years and years and years when I was young,” Chadbourne said. “I’ve got barrels of rejection slips. You just sit in a slush pile and a lot of times people, they’re overwhelmed. They don’t have time to look at some unknown schmo.”

Chadbourne’s break such as it was, was provided courtesy a close friend, “Maine’s other horror writer” Rick Hautala. After Hautala and Chadbourne met and became good friends, Hautala saw a sample of Chadbourne’s work and became a fan. At the time, Cemetery Dance was prepared to publish a collection of Hautala’s work, “Bed Bugs.” 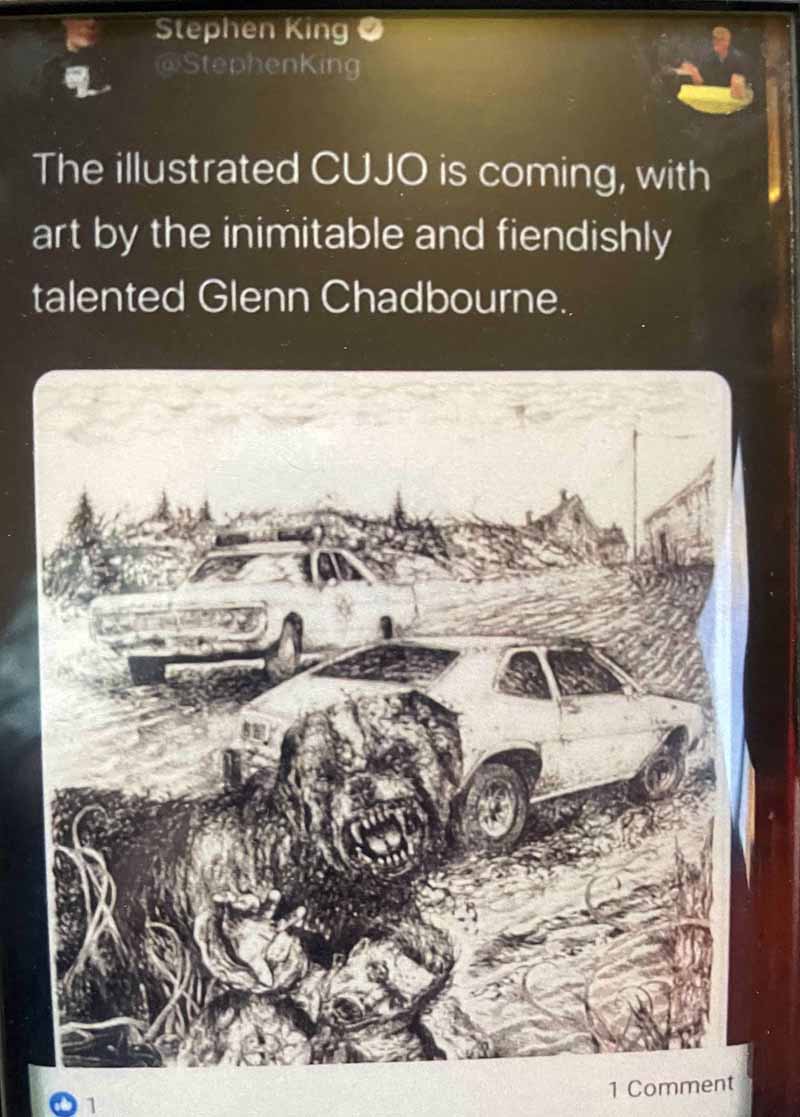 A Stephen King tweet praising Glenn Chadbourne’s work on “Cujo” is printed, framed, and mounted to the wall in the artist’s Newcastle studio. “Ill take that in the oven with me when I go,” Chadbourne said. (Sherwood Olin photo)

A small specialty publisher of horror and dark genres, Cemetery Dance Publications has become one of Chadbourne’s best and biggest clients, connecting him with other authors and raising his profile. It was Cemetery Dance owner and founder Rich Chizmar who connected Chadbourne and King.

“Rich Chizmar suggested he and I both send letters up to Steve and ask him if he would ever be interested in letting me tackle a graphic novel for the ‘Secretary of Dreams,’” Chadbourne said. “That turned out to be two huge volumes and he said ‘sho-ah.’ You could knock me down with a feather on that, and then that led to other King gigs … Once you do something for him, that really opens the floodgates for you for work.”

Chadbourne’s creative process begins with the source materials. One of the perks of his profession, he said, is that he is often treated to pre-release manuscripts. Chadbourne used to read hard copies of everything, and he still likes to refer to a physical copy, but these days, he frequently listens to an audio version.

“What I will do is I read the book, or I listen to them, but I also get the paperback,” he said. “It says ‘Johnny strangles his sister,’ on page 498, ‘with hideous, bulging eyes’ and what not, and I’ll say that sounds like that would be a good picture to put in this book and then I write that down. I’ll read the book; come up with 10, 12 ideas on a legal pad. Then I talk to the author.”

“On average most book illustrations are 6-by-9 inches, and I draw exact,” Chadbourne said. “A lot of people draw on a big piece of plywood and shrink it down. So a 6-by-9 pen and ink drawing, if I turn on all the uber details, takes me a day; about 10 hours.”

Chadbourne credits dependability as a major factor in his success. In a business where one’s reputation can open doors or close them tight, he makes it a point to be reliable. 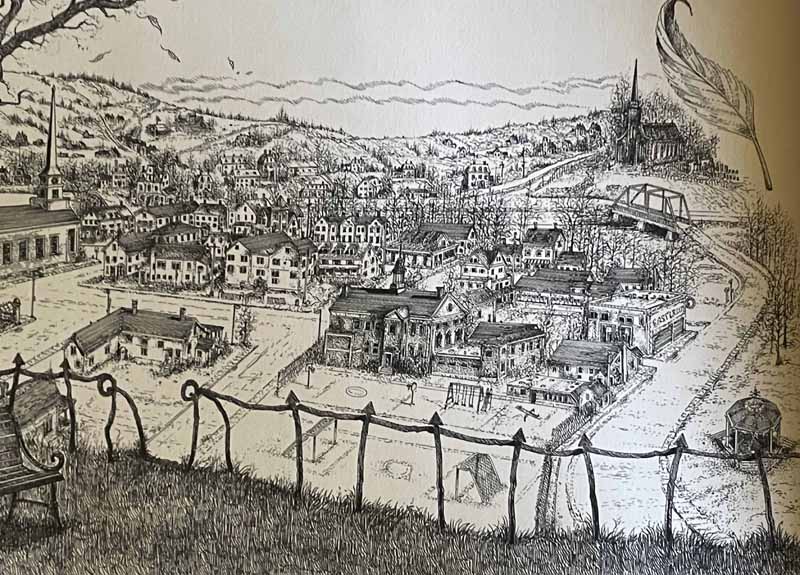 Much of the mass market paperbacks of the kind that motivated Chadbourne growing up are now produced via computer. Fortunately for Chadbourne, he is particularly well established in the niche world of high-end limited editions and boxed sets of the kind prized by collectors.

“There is a whole new group of kids coming up, that are extremely talented,” Chadbourne said. “Some of them, they put me to shame, but I’m entrenched. I’ve made my bones so to speak.”

As might be expected from a renowned figure within the genre, Chadbourne has thoughts on what makes horror effective, He prefers subtlety and story he said. “I can understand a story with some grue, if it’s a good story with character development and whatnot,” he said. “Hitchcock, you know, he would insinuate things … Whereas the ‘Saw’ flicks, I watched the first one and I said ‘well that’s kind of novel, but it’s overboard.’”

Chadbourne gives full credit to his wife of 22 years, Sheila. “The Hon,” he calls her with obvious affection.

“Saved my life,” he said. “Not a doubt in my mind. I went into it kicking and screaming when my better angel spoke up. My inner child said ‘you know, this is probably a good thing.’ Yeah, without a doubt. I adore her.”

These days in addition to balancing multiple contracts and commitments, Chadbourne tries to find time to squeeze in what he calls pro bono work.

“I’m getting to a point in my life where I’d like to be well thought of,” he said. “I try and give back. Benefits, pictures for people who lost dogs. I don’t want to sound mushy, but that’s how I feel these days. I don’t have any kids and I want to be remembered for something. That’s very important to me. The stuff that I do lives on. That’s important to me. To know, I get fan mail from some kid in Czechoslovakia, and that makes me glow. It tickles me. I’ve made someone smile half way around the world.”