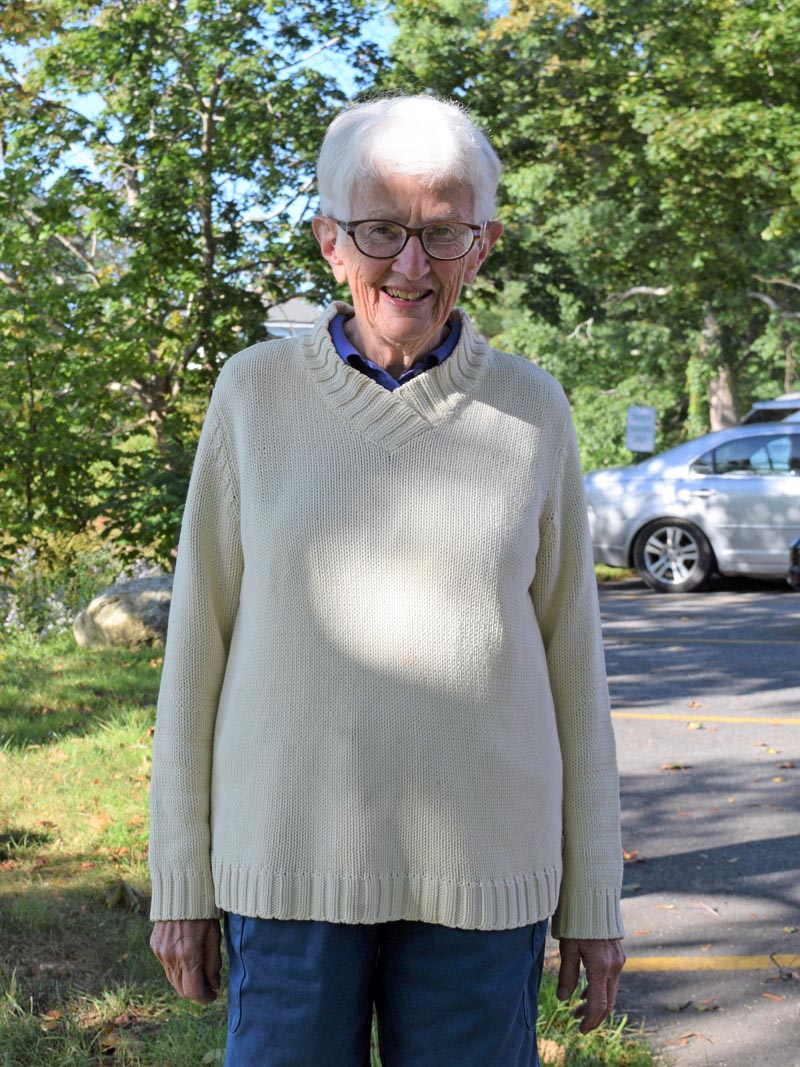 Newcastle’s Mariellen Whelan on Sept. 21 outside of the Second Congregational Church where she chats with residents and distributes diapers every Tuesday morning. (Nate Poole photo)

It’s Sept. 21, a bright Tuesday morning, and like every other Tuesday morning Newcastle’s Mariellen Whelan can be found at the Ecumenical Food Pantry at the Second Congregational Church, hustling between parked vehicles, chatting with their occupants, and shuttling diapers out to the families that need them.

Whelan came to Newcastle from Philadelphia in 2002. She said that one day she was reading in her home in Rosemont, Pa., and decided to step outside and go for a walk, but just as she opened the door she was hit with the overpowering humidity.

“I went back and sat down and I thought, ‘Why aren’t you living in Maine?’”

After extensive work with Habitat for Humanity, Whelan sought out opportunities to volunteer and support initiatives related to affordable housing after she arrived in Newcastle. A Saint Patrick’s Church parishioner, Whelan joined the social justice committee, and quickly became its representative on the Community Housing Improvement Project’s board.

“All eyes went down to the table, nobody looked up. Then I said, ‘And I’d be happy to serve.’ (It was) kind of a Hallelujah moment,” she said, laughing.

Not long after joining, Whelan helped to establish CHiP’s annual Community Cares Day event, during which community members volunteer for one day to help their neighbors with much needed home repairs at sites across Lincoln County.

The organization’s founder, Ruth Ives, hosted a youth group of 65 young people from Basking Ridge Presbyterian since 1984 to come to Maine and repair homes for those that could not otherwise afford to do so, but the program was cut short for a time in 2003.

In an effort to provide the same annual service to homeowners in need of help, Whelan and Tom Ward came up with Community Cares Day. It was an immediate success.

“Even in that first year, (Community Cares Day) drew close to a hundred people to come out and help,” Whelan said.

Whelan attributed her past success to her experience in Maine and Pennsylvania with Habitat for Humanity, in terms of knowing what sort of materials they would need and how to organize volunteers.

Whelan said that it gave Ruth Ives “a boost” to see that despite Basking Ridge’s absence, some sort of community program would be carrying the torch that she lit. 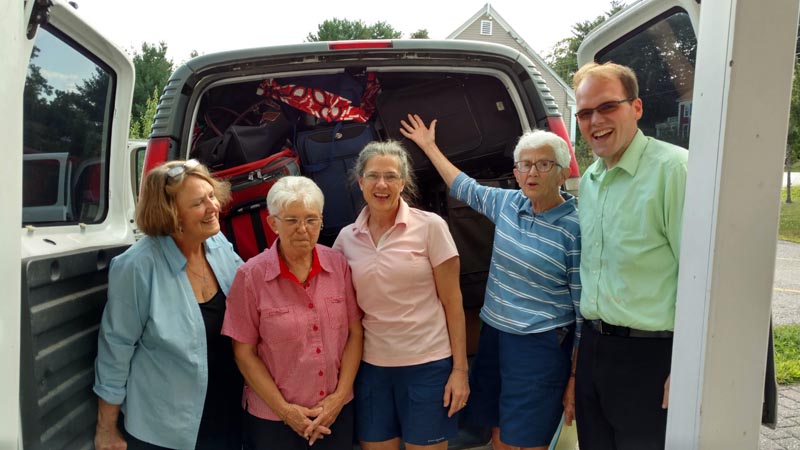 Mariellen Whelan (second from right) with a group of volunteers from the Second Congregational Church in Newcastle who transported trucks and vans full of clothing to Portland to help support immigrants rapidly entering the area. (Photo courtesy Mariellen Whelan)

“It was a way for local people to get to know the low-income families in our geographic area to see how they lived, what the issues were… to visit neighborhoods they had never visited before,” Whelan said.

The Ecumenical Council on Homeless Prevention is a coalition of five Newcastle-area churches that came together in 2010 to look for ways of preventing homelessness in Lincoln County.

For instance, in June 2013, the council successfully lobbied for Tedford Housing in Brunswick to send a case manager to the Ecumenical Food Pantry each week to meet with individuals and families facing homelessness-related crises in Lincoln County.

“If we can help them stay in whatever they have for the time being, then at least they’re in shelter. And that’s what the Ecumenical Council does,” Whelan said.

Whelan also got involved with The Carpenter’s Boat Shop, a Bristol nonprofit founded 1979 by Bobby and Ruth Ives to create an apprentice boatbuilding and boarding program to help young people seeking their life calling.

Despite her small stature, Whelan’s work with the boat shop took off quickly. She had plenty of measuring and cutting with sheetrock in her time with Habitat for Humanity, and she began working on renovating a farmhouse for the apprentices at the boat shop to reside in.

“I don’t look like someone who knows something about sheetrocking,” Whelan said.

Later, Whelan began to use leftover planks to make Adirondack chairs, which not only brought income to the boat shop, but also made use of the cedar that couldn’t be used for boat planking. She eventually moved on from chairs to building a toddler-sized sand-moving backhoe toy.

Asked where her dedication to community service began, Whelan had to give the question some thought.

“I’m 89, so you’re looking for ancient history,” she said, laughing. “I guess I’ve always wanted to be involved.”

Beyond volunteering with the food bank and other organizations, Whelan enjoys exercising at the YMCA, opera at the Lincoln Theater, and baseball. A Phillies turned Red Sox fan, she attests that Mookie Betts is the best right fielder in the game. Ever.

Despite her dedication to her community, Whelan isn’t interested in badgering others to volunteer with the organizations she’s involved with if they aren’t clearly interested.

“If people don’t volunteer for these things on their own, do I want to be the one that brings them in, for better or for worse?”

For Whelan, it’s clear that she sees supporting her community as more than enough of an attraction.