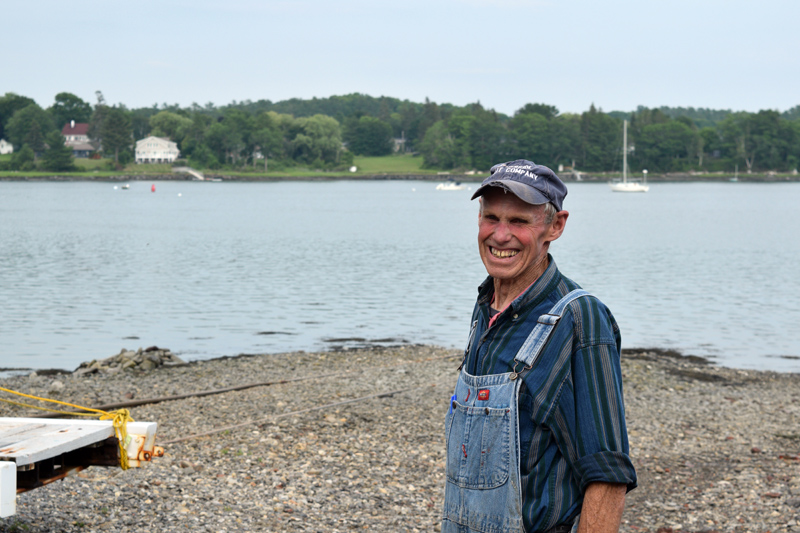 Paul Bryant’s shipyard is full of machines and vessels from another era. Bryant, at nearly 88 years, is one of the oldest of the bunch. And yet, somehow, he and his 1960s Ford engines continue to work like a charm.

It’s 4 p.m. on a Tuesday, and while Bryant has been working all day, he’s pacing from one vessel to another with enthusiasm, climbing 10 feet up a ladder to give a visitor a tour of his sailboat, grinning all the while.

Bryant has been a boat builder and designer and the owner of Riverside Boat Co. in Newcastle since 1971. While he is generally soft spoken, his passion for the boats that crowd his yard is clear and relentless.

Bryant built his first boat in sixth grade, but having now built a number of vessels, some of which have made appearances in WoodenBoat magazine, anyone would be hard pressed to get anything but modesty out of the designer.

“It was just a skiff,” he said, shrugging it off.

Bryant built the shining representation of his skills, a large sailboat named Hoot Mon V, in 1965 after eight years of work. Bryant hasn’t sailed the Hoot Mon V in about 16 years, but even hidden away in one of his warehouses it’s clear that his enthusiasm for the vessel hasn’t waned in the slightest, as he eagerly shows off everything from the two-cylinder diesel engine to the folding table below deck.

A plaque next to the privy below deck reads “The captain’s word is law.” It still makes Bryant chuckle.

The yard at Riverside, nestled along the Damariscotta River off of Liberty Street, has an optimal view of what is now The Lincoln Home, but what Bryant knows as the childhood home of his father, Creston Bryant.

Creston Bryant started Riverside Boat Co. more than 80 years ago in 1936 on Liberty Street, but the families’ history of boat building in Lincoln County extends well back into the 18th century.

Creston Bryant’s mother wanted him to be an undertaker, and he even attended school for it in Boston for half a year and worked for a funeral home for a year before deciding he preferred boats over bodies.

During World War II he built minesweepers in the shipyard where the Colby & Gale Inc. service station is now located and later installed radar on destroyers at Bath Iron Works. After the war, Bryant’s father continued to build boats by starting Riverside, but this time it was for pleasure, not war.

After Paul Bryant graduated from Lincoln Academy in 1961, he immediately went to work with his father until his death in 1971, officially taking over the business soon after.

Something like a family doctor, much of Bryant’s business is dedicated to repairing and maintaining others’ boats. He explained that oftentimes these boats are passed down through families, and Riverside remains their home across generations.

With no email, no website, and no social media, Bryant operates his business on reputation and paper. He estimated that at least 45 of the boats in his yard had been with the business through much, if not all of his life.

As Damariscotta and Newcastle have expanded over the years, Bryant’s yard too has had to expand with more and more warehouses and other structures to work through the winters. Bryant even has his own timber mill on site. He built the mill in 1975, powering a four-foot diameter blade powered by a four-cylinder Detroit diesel engine.

Bryant’s business, his family, and his life is sustained by his long-standing relationship of trust with the community, and he has done more than his fair share to give back to that community.

Bryant has also been the harbormaster in Newcastle since 1971, eventually taking over responsibility for Damariscotta as well after their harbormaster resigned in the ‘80s. He ruefully described the job as “keeping people happy.”

Newcastle paid Bryant $1,500 for his work as the harbormaster in 2009, but he eventually asked the town’s municipal officials to stop.

“I grew up here. I feel obligated to do this for the town,” Bryant said.

Bryant also took on the role of Newcastle’s fire chief for 15 years, but he makes it sound more so as if he fell into it than anything else.

“It was a couple of kids who started a grass fire down along the shore … and the wind was blowing this way, and they needed help fast. So I was sort of talked into it,” Bryant said.

Bryant eventually stepped away from the position when his first wife, Katie, unexpectedly passed away, leaving him with two sons in sixth grade and fourth grade to care for.

“I had other more important things to deal with,” Bryant said.

Bryant’s second wife, Linda, with an industrious spirit to match her husband, works at Riverside doing much of the boat painting and other maintenance, as well as office work.

Meanwhile, Bryant’s son, Nat, is poised to take over the family business at a moment’s notice, having graduated from The Landing School in Kennebunk and with his own 19-foot sailboat featured in WoodenBoat Magazine.

Nat Bryant even purchased the home that Paul Bryant grew up in, close to both the shipyard and Bryant’s current residence on Liberty Street, and is in the process of remodeling it.

While the world around him might be changing, Paul Bryant, like his wooden vessels, will continue to work as well as always.