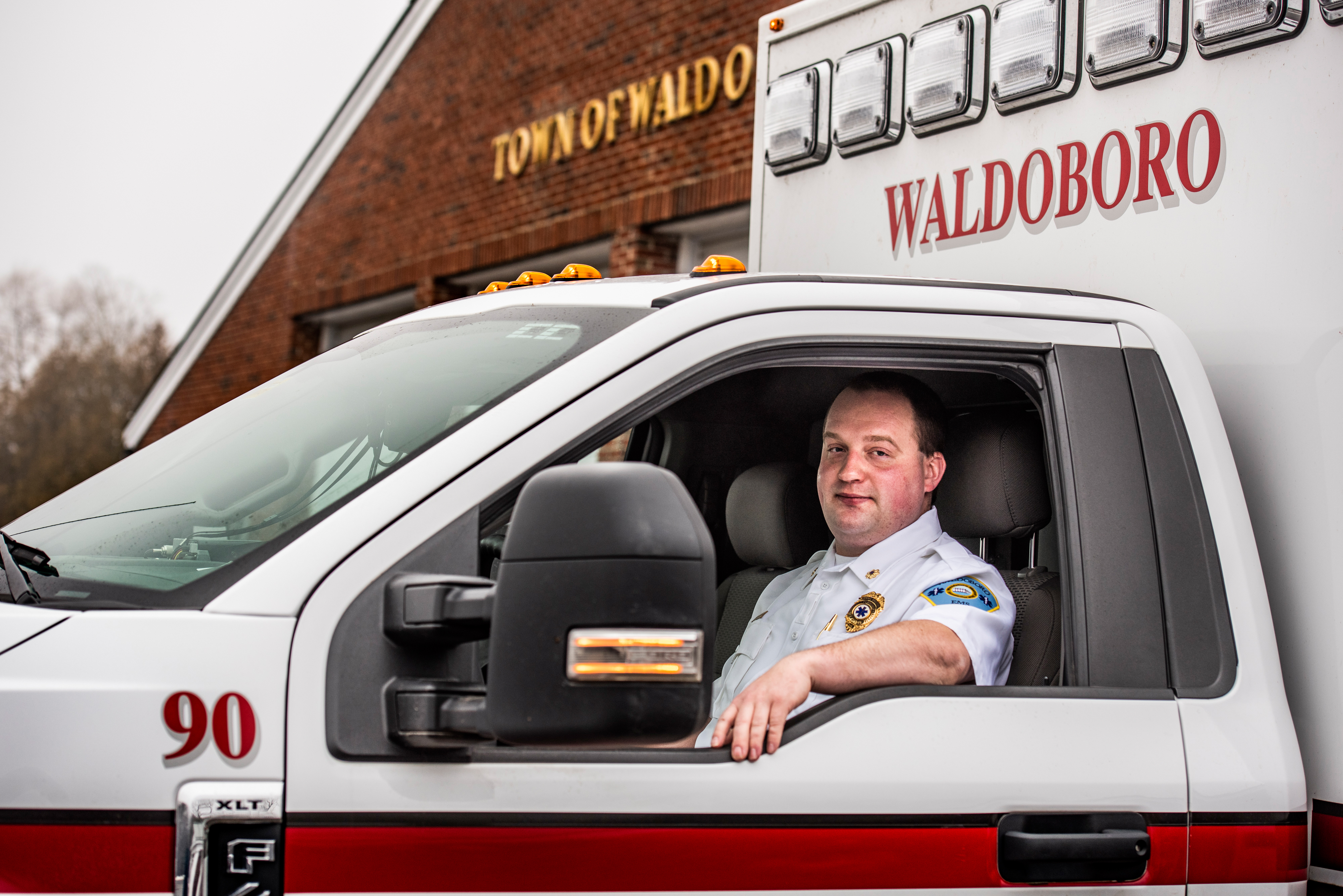 Derek Booker at the wheel of an ambulance outside the Waldoboro station, Sunday, Dec. 13. Born and raised in Waldoboro, Booker was recently promoted to deputy director of Waldoboro Emergency Medical Services. (Bisi Cameron Yee photo)

On Tuesday, Dec. 8, at the Waldoboro municipal building, Derek Booker was sworn in as deputy director of Waldoboro Emergency Medical Services. His parents were on hand. Residents of Waldoboro, gathered for that evening’s selectmen’s meeting, witnessed the ceremony. His mentor, Waldoboro EMS Director Richard Lash, introduced him to the community he swore to serve. It was the proudest moment of his life.

Booker was raised in Waldoboro by his parents, Scott and Marsha Booker, and graduated from Medomak Valley High School in 2012. But the summers he spent in Jefferson with his Uncle Bob influenced his future the most.

Bob Walker was Jefferson’s fire chief for over 20 years. When Booker was young, his parents would drop him off in Jefferson when they needed a babysitter and, from the age of 8 or 9, Booker went out on emergency calls with his uncle.

He loved the lights and sirens. He loved the adrenaline rush of a call coming in. Even though his uncle never let him out of the truck, he absorbed and learned. When September rolled around, he hated to leave — he found it a hard truth that he had to go back to school.

But he’s grateful now for the education. As he grew older, despite working in other fields, there was nothing Booker was more interested in than emergency medicine. He didn’t know it yet, but he had found his calling.

His first job in the field was as a driver. In 2009, then-Waldoboro EMS Director Mike Monck told him: “You’re cut out for this — you’re a natural.” From that moment, “I spent all my days on an ambulance,” Booker said. He eventually went to school to become an emergency medical technician and was licensed in 2012.

Booker worked part time for Waldoboro EMS and for the Boothbay Region Ambulance Service until he was offered a full-time position with the Central Lincoln County Ambulance Service in 2014. Even working full time, he kept his position with Waldoboro. “I was always here, pager, radio, cellphone always on, working on call for a $2 stipend at night,” he said.

It was Nicholas Bryant, chief of the CLC Ambulance Service, who told him to get his paramedic license and “stop messing around.” While he found the school hours necessary to be a paramedic significant, Booker said the clinical hours were astronomical. But by that time he was on a path. And in 2019 he earned his paramedic license, which he now calls the second-proudest moment of his life.

Booker is keenly aware of the challenges the department faces. “The well is dry,” he said of the dip in staffing levels for first responders across the board. “People aren’t signing up to be on the side of the road at 2 a.m. in a ditch wearing an N95 mask, goggles, and gloves, taking care of people.”

“We are short-handed all the time. The pay doesn’t compete with the corporate world. We can’t recruit as effectively because we can’t go into the schools due to COVID-19 precautions,” Booker said. But still, despite the challenges, Waldoboro’s EMS crews find a way to be there when their community needs them. “They love to do the job,” Booker said.

This year, COVID-19 presented EMS with new challenges that Booker must now face from a leadership perspective. In the past, a call for shortness of breath was fairly standard. Most often, the underlying issue was known and EMTs could provide the necessary aid with a minimum of stress.

But now? Shortness of breath is a symptom of COVID-19. Now EMS crews must don N95 masks, face shields, gloves, eye protection. All equipment must be fully decontaminated.

“It’s exhausting,” Booker said. “We have to remain fully equipped for an extended period of time, spending 15-20 minutes in the back of a warm ambulance on the way to the hospital, decked out in pandemic attire. It tires people out. It wears on their mental health.”

Booker is also concerned about the patient experience. “Masks are a barrier between the patient and the EMT. Facial expression and tone play a huge role in patient care. Patients can’t always see the empathy,” he said. “But trust me, it’s there.”

Booker said cardiac arrest calls are the ones that stay with him, especially his first pediatric cardiac call. There are good days, when patients walk into the ambulance bays to thank the men and women who brought them back to life, gave them a second chance. “You feel like you made a difference,” Booker said. “But we don’t always have that outcome.”

Booker said burnout can be a significant issue for first responders, one that has an impact on employee health and retention throughout the field. “There is a stigma, I think, especially for first responders, medical personnel, the military. If you reach out for mental health reasons, it’s showing weakness.”

“You don’t realize how much things bother you, how heavy they lay on your chest, until you talk about them,” he said.

But “EMTs are a community within a community,” one Booker grew up in. He credits all the first responders he has worked with during his career: co-workers and colleagues, those he has worked under and those he has supervised, the “dedicated, resilient group who keep showing up, even more during COVID.”

“All those people made me who I am,” Booker said. “This is home.”