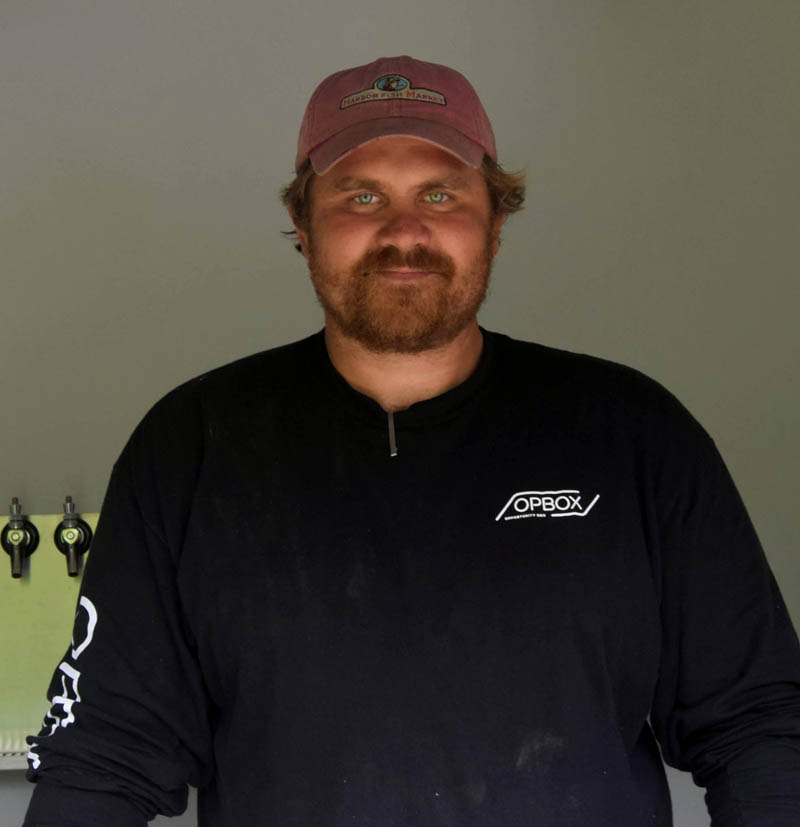 Ben Davis stands inside one of his finished OpBox products, this one made to function as a beer stand, at the OpBox production facility in Nobleboro. The unit comes with a room where kegs are stored and cooled by a window-mounted air conditioning unit. (Alec Welsh photo)

Davis is the middle of growing three businesses he cofounded and operates with his sister Emily Davis. They recently created a parent company called Even Keel, to start attracting investors.

“Instead of slowing growing our businesses through profits we are looking to find investors that allows us to grow faster and bigger than we could without them,” Davis said.

At the moment, Davis’ best known company is OpBox. OpBox produces eco-friendly retail structures out of 100% PET plastics, the type of plastic used to make water bottles. The structures range in size and can be custom designed for each customer.

“We have one that is 96 square feet and customized for selling sports jerseys,” Davis said. “We also have a beer stand that has a cooler to store kegs and a separate room where the beer is poured and served through a window.”

Davis is currently building what he calls an OpBox village in Boston where approximately eight to 12 OpBoxes will be set up in a parking lot and converted into a small shopping center. He is currently selling products in three major cities including Boston.

“Right now we have products being sold in Boston, Atlanta, and Chicago,” Davis said. “We are looking to expand our production facilities somewhere in Maine right now because we won’t be able to keep up with demand.”

The growth OpBox is experiencing wasn’t always the case for the company.

“I spent the whole drive home back to Maine just thinking about all limitations we had with the metal boxes that we buy from China,” Davis said.

At the time, OpBox products were made from metal shipping containers Davis would purchase and have modified by a third party business. Returning home Davis decided to book a flight back to Canada the next day to learn more about JD Composites and the people that run the company.

“I went to their factory and I spent three or four days at their factory getting to know those guys,” Davis said. “They thought I was a little crazy at first but it worked out.”

Within the next year Davis decided to partner with JD Composites and create a new business based in Maine called Acadian Composite Materials, where they would manufacture and develop a similar product call ECO Structurally Insulated Panels or ECOSIP.

“The material doesn’t rot, and doesn’t break down as easily because it is made of that PET plastic,” Davis said.

Based on the way it is molded together, ECOSIP can be used to build entire structures that are insulated, and wired for electricity without requiring additional materials.

Davis now uses the material to build his OpBox products, replacing the metal containers he was originally using. The change allowed him to create different sizes and models of OpBoxes without having to rely on a third party to design the product.

The plan with the ECOSIP material is not limited to just building OpBox products. Davis envisions the product as a replacement for plywood commonly seen in hardwood stores around the country. The product is more expensive than plywood, but it is the only material needed for some building projects.

“The material is a wall and insulation all in one product. You do not have to build a wall, apply insulation, plywood and then add dry wall; it’s all here in this product,” Davis said. “We hope to see this product is every hardware store from Lowes to Home Depot.”

Davis’ inspiration and drive to create a new business came after the passing of his father in July 2017.

“My sister came back to Maine from New York in 2015 when my father became sick,” Davis said. “After his passing my sister and I looked at each other and realized life was short and decided we didn’t want to spend all of our lives working.”

Davis and his sister decided to pull some money together and start a business that would allow them to live the life they wanted to live. In 2017 on an after dinner walk in Portland Davis struck up a conversation with a man named Ed Benjamin who gave him an idea for a business.

“He told me the best business he had been in was renting out shipping containers,” Davis said.

Benjamin told Davis he just receive a check in the mail each month and hasn’t seen the container in years.

“That conversation started the business Portland Container Company,” Davis said. The business purchases 64 square foot metal shipping containers and delivers them to customers to use a storage unit. The small size allows the containers to be placed anywhere. The company also has its own storage facility in Portland located at 1 Lincoln St.

Portland Container Company was the genesis of the Davis’s current business growth. Once they started the company they couldn’t stop thinking about how to use the storage units as retail shops. In 2018, while having their photo taken for a magazine article, the photographer asked if they had any ideas on how he could set up his own art gallery.

“That’s when my sister had the idea to modify one of our containers into an art gallery,” Davis said. “After that moment we decided to create OpBox.”

Davis wouldn’t know what he would be doing with his life if not growing his businesses.

“I am looking to build a little legacy,” Davis said. “I don’t know what else I would do.”