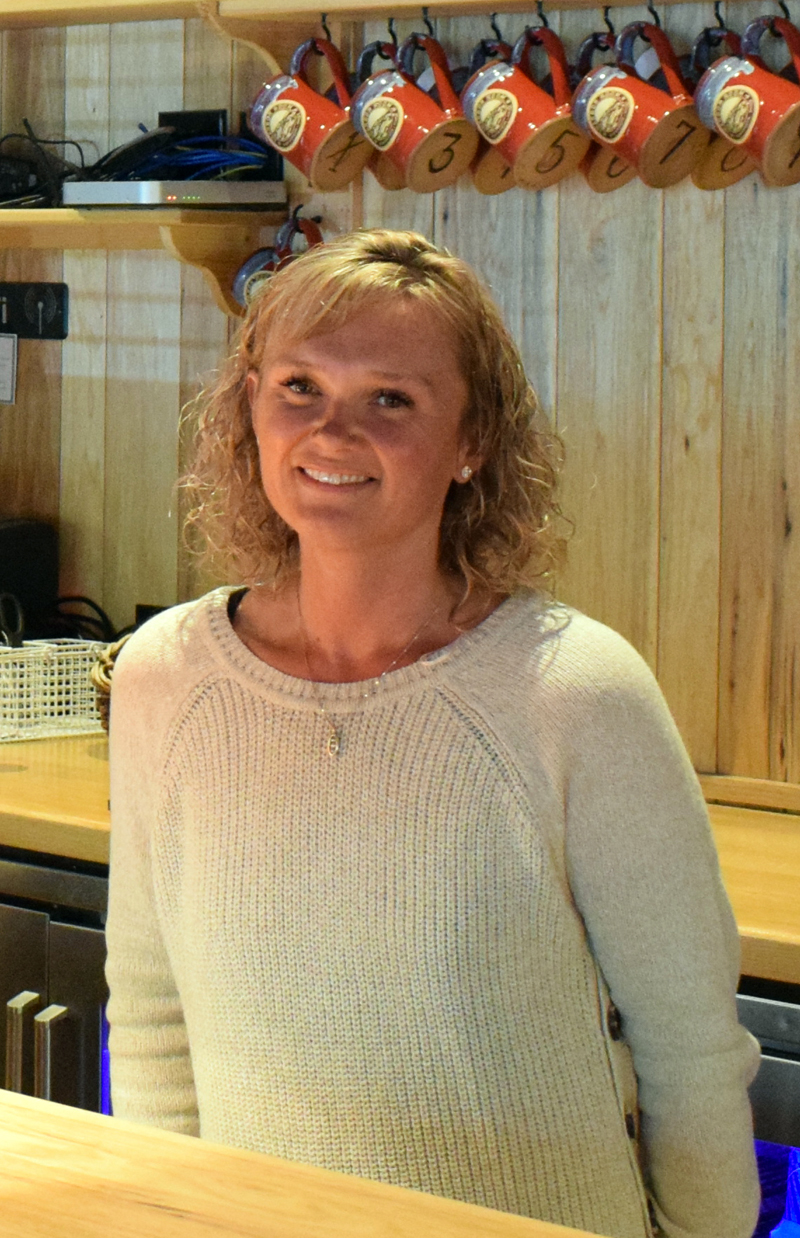 Cortney Geyer stands behind the bar of The Harbor Room restaurant. Prior to becoming the restaurant’s owner, Geyer previously worked as a server and manager under prior ownership. (Evan Houk photo, LCN file)

Cortney Geyer still isn’t used to being referred to as an “entrepreneur.”

After working at The Harbor Room in New Harbor for four years, first as a server and then as a manager, Geyer took ownership of the business in January and officially reopened it in February.

“It’s still almost not real,” Geyer said in an interview at the restaurant on Tuesday, May 24.

February is usually a difficult month for restaurants, Geyer said, but the community’s response to the reopening was outstanding and business has been going strong since. She sees keeping the restaurant open as its own way of giving back.

“I did this for the community,” Geyer said. “We need a place in the winter for the people that live here to gather.”

This isn’t the position that Geyer anticipated being in almost a year ago when she became the manager of the restaurant. Geyer thought she would get three to five years of managing experience under her belt before taking over ownership, but that schedule was suddenly fast-tracked on a morning in November when she and her staff found themselves locked out of the restaurant.

With The Harbor Room closed with no explanation, Geyer decided to take a leap of faith and signed for the ownership of the business with the help of property owner and restaurateur Xavier Cervera.

“A lot of people told me I could never do it,” Geyer said.

A lifelong resident, Geyer is nearly as renowned in New Harbor as her restaurant. She was born at LincolnHealth’s Miles Campus in Damariscotta, graduated from Lincoln Academy, and even built her home next to her parents’ in New Harbor.

Before fully committing to the restaurant, Geyer worked various jobs as a nurse at LincolnHealth and local schools while waiting tables on the side. “I’ve always had to work two to three jobs,” she said.

She hasn’t let her new title impact her work ethic or humble attitude. Geyer still comes into work every day ready to do what needs to be done, whether that’s waitressing, bartending, or washing dishes. In all, she said she works around 80 to 90 hours a week, but her efforts have contributed to a healthy staff environment.

Geyer said that she wants to be the kind of owner that her staff doesn’t just work for, but with. When asked what her favorite part of the job was, she was quick to answer.

“The people. The customers and the employees,” she said. “This is like my home away from home.”

Sometimes home comes with Geyer too, in the form of her five-year-old daughter, who is a hit with local customers and has already developed an impeccable silverware rolling technique.

With three children, Geyer’s time outside of the restaurant is dedicated to bussing between horseback riding lessons, baseball, and any number of other after school activities. However, she has a moment to herself everyday on her morning run. “That’s for me,” she said.

While Geyer sees her staff as a family, it’s still not as big as she’d like. The Harbor Room just recently hired enough staff to start opening on Tuesdays, but, like many restaurant owners in Maine, Geyer still doesn’t have enough cooks, servers, or dishwashers.

While The Harbor Room has struggled to recruit staff, there have been no such issues with finding acts to fill the outdoor bandstand. The restaurant hosted the Down East Dead, a Grateful Dead cover band, on Friday, May 21, and has more local acts lined up through June.

Geyer hopes to launch a new summer menu with more seafood, just in time for the peninsula to get busy.

Maine recently lifted indoor and outdoor capacity, masking, and physical distancing requirements, but Geyer said that her staff will still be masked. “I want my customers to feel comfortable,” she said.

Geyer’s long-term goal is to someday purchase the property from Cervera, but she’s also thought about perhaps handing off the business to one of her children some day. Just not her five-year-old, who has determined that she will be a veterinarian.

Although Geyer has only been a business owner since January, she does have some sound advice for other aspiring entrepreneurs.

“I would suggest that every day you get up and look at yourself and say ‘you can do this,’” she said.