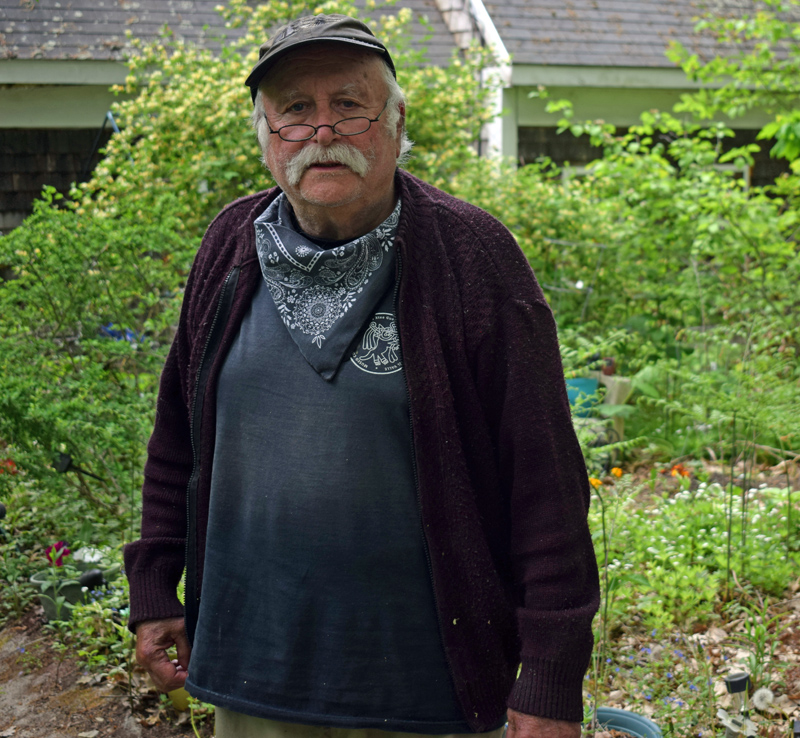 Arthur Mayers outside his home in Newcastle on Sunday, May 23. Mayers has been filming oral histories with Lincoln County residents for 30 years and is in the process of digitizing them and uploading them to his YouTube channel. (Evan Houk photo)

Newcastle resident Art Mayers is in the process of preserving videotaped oral histories detailing the lives of Lincoln County individuals and different local themes on his YouTube page.

“Those guys had a special way of storytelling. They had their own voice. You don’t see that much anymore. People are sort of homogenized the way they talk,” Mayers said during an interview on May 23.

He said he has made about two dozen oral histories, some focused on individuals like Huston Dodge, of Damariscotta, or Eleanor Everson, of Dresden, and some focused on themes like “Getting Around” or “Dance Halls.”

Mayers is digitizing all the videos he has made over the years and posting them to his YouTube channel, “Arthur Mayers.”

The idea of filming oral histories was suggested to him by Lucy Martin in the early ’90s. Martin told him he should film a few interesting people, like Charlie Thayer and Lloyd Palmer, of Whitefield, to preserve the history contained in their minds before it was lost forever.

Mayers started meeting more interesting people while working as a reporter for The Lincoln County News and began making video recordings of them talking about their lives and local history.

“I started seeking out opportunities to talk to some of these folks, from South Bristol to Whitefield,” Mayers said.

He described “Getting Around,” in which he talks to different locals about how they traveled in the 1930s and 1940s. He said that Elden Hunt, of Newcastle, would ride his horse to school at Lincoln Academy, tie it up at someone’s house at the bottom of Academy Hill, and go down to feed it at lunchtime.

After he started filming the oral histories, he presented them to historical societies around the county.

Mayers feels his oral histories are important because they preserve a certain perspective and depth of knowledge that could disappear forever.

“These are people who are no longer around to tell their story. What they knew and what they were able to relate will be lost in that form forever,” Mayers said.

He talked about one video he made with Rufus Stetson and Bob Strong, where the pair walked down Main Street in Damariscotta and described the buildings and what they had been over the years.

Mayers has over 400 videos and over 900 subscribers to his YouTube channel. Over half the videos on his page document his winter trips to an Indigenous Zapotec village in Mexico, Teotitlan del Valle, where he has been going since 2009.

Mayers said the village is famous for its weaving and his videos encapsulate the local activities and fiestas that take place in the village. He said it is a good way for relatives in California to keep up on what their family is doing in Mexico and the videos have seen some popularity for that reason.

Mayers got his start in the newspaper business early, when he published the Wacky Weekly as a fifth grader at Grinnell Elementary School in Derry, N.H.

“I’d type it up on the typewriter and bring it into the principal’s office and he’d run off copies and I’d sell them for a penny apiece on the playground,” Mayers said.

Much of Mayers’ focus in high school and college was on biology and oceanography. He landed in Maine when he attended the Darling Marine Center to obtain his doctorate in oceanography. But before finishing his thesis, he realized there were no jobs available in the field and that the work was monotonous.

“You’re looking through the microscope at some bug for 20 years. It’s kind of boring,” he said.

In the early 1970s, Mayers bought a piece of land in Whitefield and became part of the burgeoning “back to the land” movement in the area. In Whitefield, he raised sheep and chickens and built houses.

He then began writing and acting in plays and musicals for community theater.

In 2005, his most popular work, “Renys, the Musical,” premiered to “rave reviews” at the Waldo Theatre, as the Lewiston Sun Journal reported.

“A lighthearted musical satire about an epic struggle between a small-town retail icon and a box store Goliath masquerading under the name Wallmutt, the play is also a love letter to Renys and a delightful comic sendup of small town life in Maine,” the newspaper reported.

Videos of the musical and two others are posted on Mayers’ YouTube channel.

In 1981, Mayers asked the Kennebec Journal if it wanted someone to write theater reviews. The editor said instead that the newspaper needed a reporter to cover school board and selectmen’s meetings in Whitefield and Jefferson.

In the late ’90s, Mayers began working full time at The Lincoln County News as a reporter. He has been in the industry ever since, and currently writes for the Boothbay Register and Wiscasset Newspaper.

In 1996, Mayers built his house in Newcastle “from the ground up.”

He is musically inclined and has played with the Narrow Gauge String Band. He got his start playing the fiddle and pennywhistle and he also plays the ukulele bass.

To watch some of Mayers’ oral histories, visit his YouTube channel, “Arthur Mayers.” For a list of subjects or to find a specific individual or subject, email arthur.mayers@gmail.com.