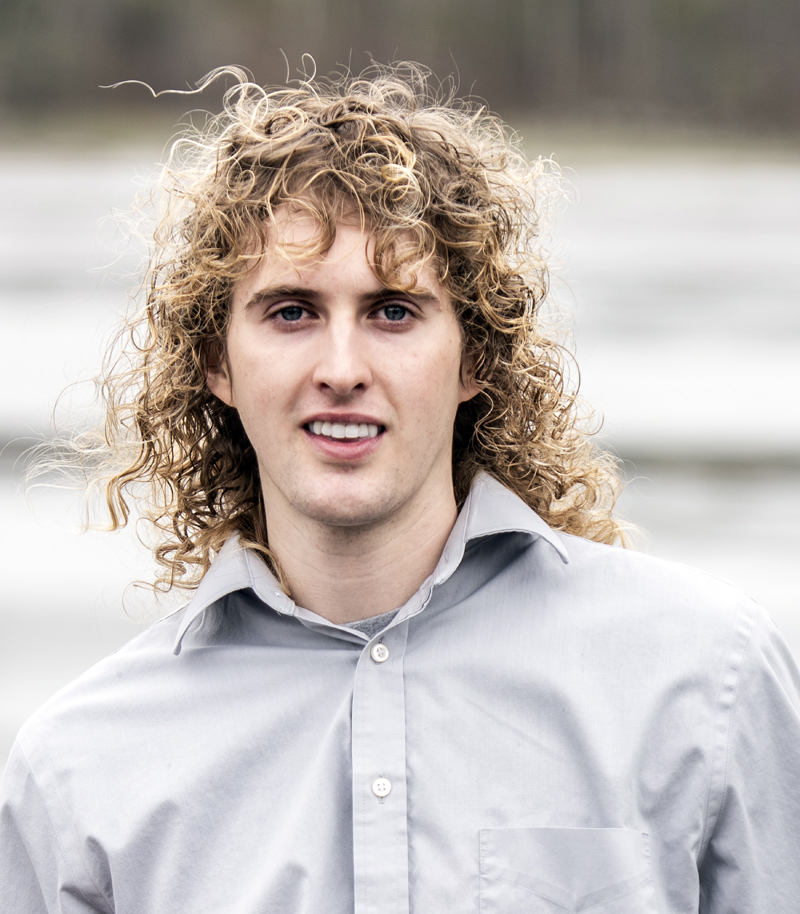 Zak Melvin poses for a photo at the town landing in Waldoboro on Saturday, May 8. (Bisi Cameron Yee photo)

Zak Melvin looks like he could be a member of one of his favorite rock bands. But he’s not. He’s an educator and a clammer, both in equal measure.

Melvin said most people think he’s a student when they first meet him. But when he tells them the two diverse ways in which he earns his living, they generally want to hear about the clamming. “Most people don’t put teacher and clamdigger together,” Melvin said.

Melvin is a native of Waldoboro in every sense — born there, raised there, lives there now. The town is an integral part of who he is.

He was in the last class at A.D. Gray School before the building closed. He graduated in the top 10 of his class from Medomak Valley High School and attended the University of Maine in Augusta so he could live at home while he went to college.

Melvin has been teaching math at MVHS full time for the last three years. At only 26 years old, Melvin has been the youngest teacher there since he started, although he said the new math teacher may be younger now.

Melvin became a math teacher because “numbers made the most sense.” He did OK in other classes, but he looked forward to math class. He said his English teacher, Linda Pease, now principal of MVHS, encouraged him to consider a career in teaching. She welcomed him back as a student-teacher and hired him after he obtained his degree.

Melvin said he uses his youth to his advantage; it helps him relate to his students. “I know what they’re thinking because I think, ‘What would I be thinking in their position?’” 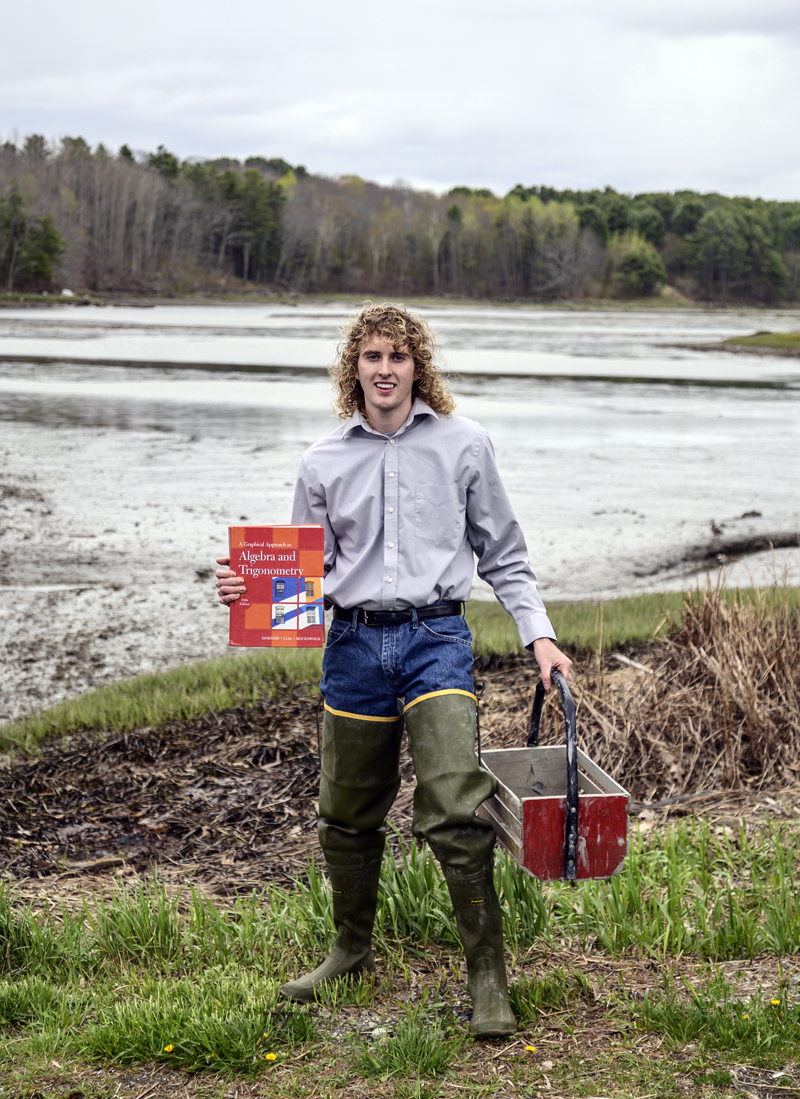 Zak Melvin showcases his two careers in Waldoboro on Saturday, May 8. Melvin wore hip-high waders to represent his clamming heritage and a blue button-down shirt to represent his full-time job as a math teacher at Medomak Valley High School. (Bisi Cameron Yee photo)

Those insights have helped him in his recruiting efforts for the school’s math team, which he co-coaches with seasoned math teacher Bill Hinkley. This year the team saw increased participation and had its best season in years.

Melvin describes clamming as the opposite of teaching. “They’re great jobs to supplement each other,” he said. “Clamming is all physical, out in the sunshine.”

Melvin started clamming with his father when he was 10 years old. He still heads to the clam flats on weekends and during the summer whenever the conditions are favorable.

Because the tides change every day, the start of Melvin’s clamming days fluctuates. He digs clams from three hours before low water to three hours after. “Then you’re done early with the rest of your day to enjoy,” he said.

Weather and temperature are not factors in whether he goes out. He clams any time the river isn’t frozen.

He gathers the most clams in the spring. A good haul is up to a barrel, which is 6 hods at 25 pounds each for a total of 150 pounds in a day.

But according to Melvin, summers are the best time to clam — when the tourists are here and the prices are up.

Clamming isn’t easy, he said. There are black fly attacks and midges that swarm over his arms and around his face as he digs.

The constant stooping can be hard on the back. Melvin doesn’t use a clam hoe — he said pulling the mud forward is even harder on his back. He prefers to pick clams out with two fingers and flip them into the hod.

Clamming is hard on the hands too — digging into the river bottom, being abraded by the rough shells of the clams. Gloves are recommended.

And there have been seasons when predatory green crabs decimate the clam population, leaving few for the clammers to find.

There are rare days when Melvin may get stalled on the clam flats. It happens maybe a couple of times a year, he said, where the weather forecast lets him down and rain comes in and the clam holes melt back into the mud.

Without the telltale holes, there is no way of being sure where the clams are and all that’s left to do is relax, wait for the tide to come in, and head home with nothing gained but a day on the river.

Thunderstorms are a bit more serious. Being in the middle of a river on a metal boat with lightning bouncing about is not an ideal situation. In those cases, Melvin heads to shore to shelter until the storm is over.

Melvin said the best moment is when the day is done and he’s riding up the river with the tide, worn out from the work, with a barrel of clams in the boat. He said that’s one way clamming differs from teaching — he can clearly and immediately see the results of his labors. 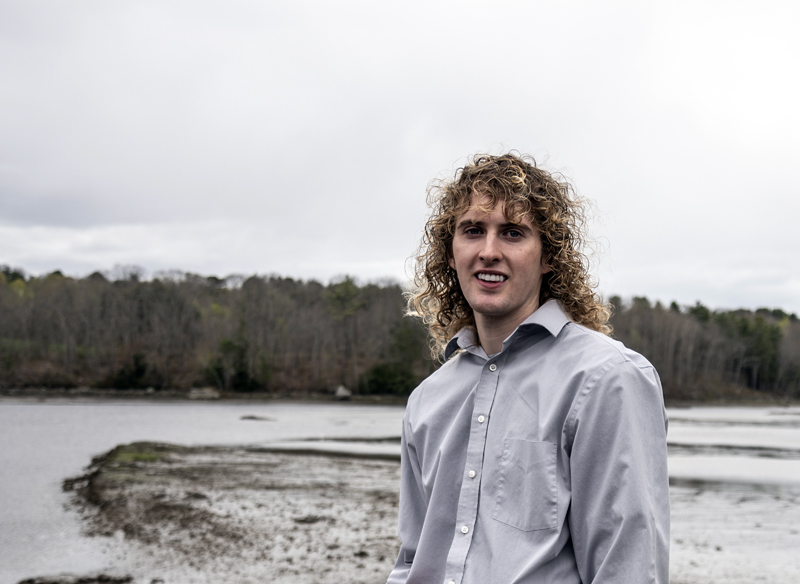 Zak Melvin stands in front of the Medomak River in Waldoboro on Saturday, May 8. Melvin calls the river “his safe place” where he can escape the stress of teaching and return to clamming, which he has done since he was 10. (Bisi Cameron Yee photo)

In his free time, Melvin enjoys the other outdoor opportunities that abound in Waldoboro. November is his favorite month, when he can hunt white-tailed deer. He loves the taste of venison.

“I’m not interested in Netflix,” he said. “I don’t watch a lot of movies. For me, a good afternoon is going down and seeing if the stripers are biting.”

Melvin’s musical tastes, influenced by what his parents listened to when he was growing up, run to ’70s, ’80s, and ’90s music. Paul Stanley, of Kiss, and Bret Michaels, of Poison, are favorite artists.

Cars are another passion — he drives a red 1988 Corvette that he bought in the summer of 2013, when he graduated high school. On occasion he takes it down to New Hampshire and drag races at the New England Dragway in Epping. 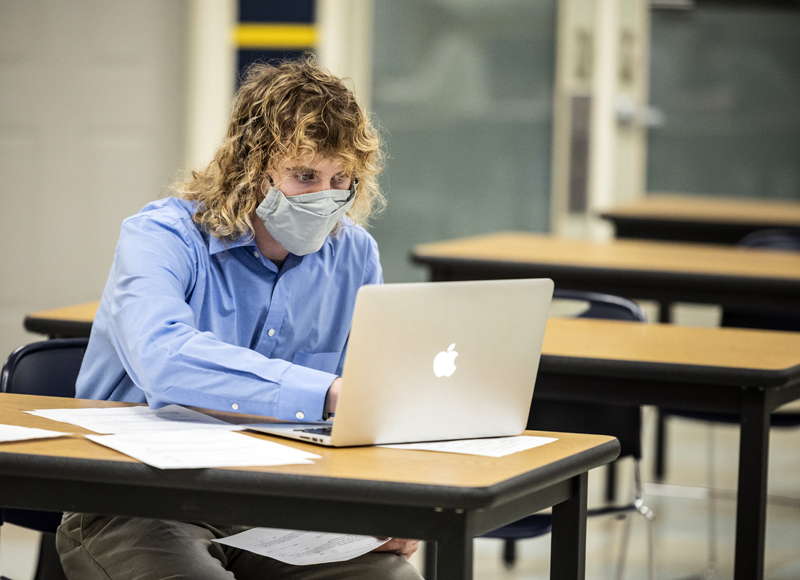 Melvin said people from away don’t always understand the town he grew up in. “They think Waldoboro’s just a clamdigging town, a bunch of hicks, but we have some very smart and hardworking people,” he said.

He points to the high school’s math and science teams, and other ways in which MVHS students have succeeded. “There are a lot of ambitious people in the school,” he said.

He points to the Medomak Project and the work the clammers and the town’s shellfish conservation committee have done to clean up the river. “People think of clammers as throwing the garbage down when they’re actually doing the opposite and cleaning up the pollution,” he said.

Melvin’s mother was an educational technician, but she came from a clamming family. His father has a degree in technology, but he’s been a clammer all his life.

Melvin is following family tradition in both ways on both sides. Education has given him a career he can count on in a field he enjoys, working with people he admires. And as far as clamming goes, “I’ve got clamdigging in my blood,” he said.