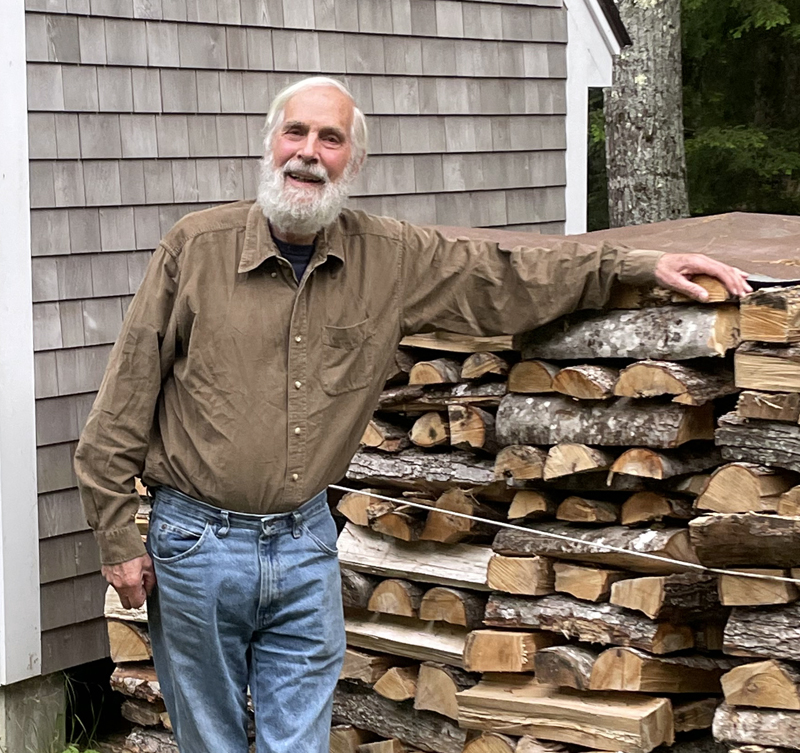 Rem Briggs poses for a photo in front of his Newcastle home. (Sherwood Olin photo)

Rem Briggs belongs to that special group of Lincoln County residents – the ones who have retired, moved to the Midcoast, and essentially make an entire second, or even third, career volunteering to do the work that actually makes their new communities go.

Arriving in Newcastle with his wife Taylor in 2006, the New York City-born Briggs fully embraced his new home, serving on the town’s planning board and the comprehensive planning committee, delivering Meals on Wheels and joining the Skidompha Public Library Board of Directors, among other activities.

Currently, he may be most visible in the Twin Villages through his work with the Skidompha Secondhand Book Shop in Damariscotta where he volunteers four days a week. There Briggs’ love of books and a good conversation come together in the most satisfying way.

Briggs, a retired high school English teacher, said the book shop nicely bookends with his first job fresh out of college: also a bookstore, this one in Boston. “Probably, that’s been my most rewarding volunteer experience since I’ve been here,” he said. “I love books and I love people and they are both there.”

The couple didn’t just retire and move to Maine. First, they knocked off one of Rem’s bucket list items. After he retired from teaching English literature at Roosevelt High School in Hyde Park, N.Y. in 2003, the couple bought a 38-foot Cape George Cutter from Rem’s older brother. They spent a year outfitting it, planning and preparing, and then they left for Europe on what would become a two year, 52,000-mile circumnavigation around the world.

Recalling the trip, Briggs reflected on the 44-day, 6,500-mile passage between South Africa and Australia. “You’re out there, there is nothing else around except for the albatross and it just blows like hell,” he said. “Day after day, but you run with the wind and it’s just the best sailing you can imagine,” he said. “We were out there 44 days. We didn’t see anything, not another boat; no contrails from a plane. One day I saw a bottle float by. That was it.”

Briggs thinks he inherited his love of boats from his father, Philip. “The joke in my family was you didn’t have any standing at the dinner table until you built a boat,” Rem said. “Then you were allowed to talk.”

In 1968, Philip Briggs and his college roommate, Reeves Morrison, Taylor’s father, recreated the “Viking route” in reverse, starting in Greenland and sailing toward to Europe. It was during that voyage Rem and Taylor first became acquainted and as it turned out, Taylor’s love for boats matched that of her future husband’s.

“When we were courting, instead of going dancing, we built a boat together,” Rem said.

They launched that boat, a Swampscott Dory, in Bremen in 1974, and married in 1975. Today, the Briggses share five children – two of whom live in the state – six grandchildren, and the dory, which currently sits under a cover in their Newcastle door-yard.

“Having two of my five children living in Maine has been incredible because when one family needs something, the other family comes to help out,” Briggs said. “It’s wonderful having family around.”

The couple had already decided to settle in Maine by the time they had sailed into Bremen in 2006, and they bought their current home after a thorough search. The couple was well acquainted with the state long before they moved here. Rem’s parents retired to Nobleboro in 1969 and his family had vacationed repeatedly in Maine in the years prior to that.

“It was shared community and both Taylor and I immediately got involved in the community,” Briggs said. “My father did Meals and Wheels so I did that from 2007 to 2016, when we left to hike the Appalachian Trail.”

Unlike sailing around the world, Briggs said he had given no thought about hiking the trail until he was challenged by his granddaughter, who completed the hike with her family in 2014.

“Maddie turned to me and said, ‘you know, I hiked the Appalachian Trail when I was 7 years old. You’re almost 70. When are you going to hike it?’ and I said OK,” Briggs said. “Challenge accepted.”

Despite his experiences on the trail and on the water, Briggs said he has no desire to turn his travels into a book. Many people have done those things, and many of those people have already written about them. In any event, Briggs said, details his travels would hardly make for interesting reading.

“It was a very uneventful trip,” he said, discussing the around-the-world excursion. “Except for the people we met.”