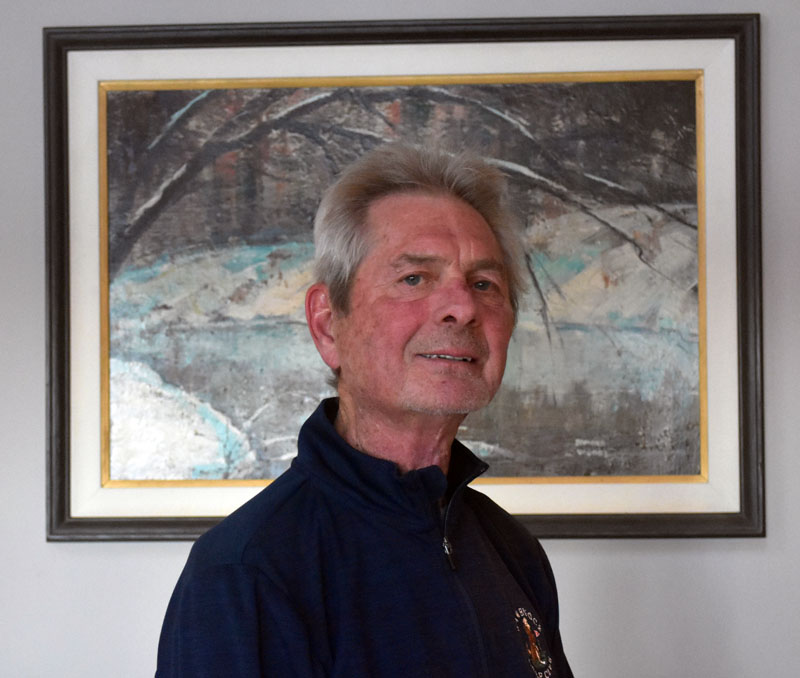 Rick Hagen poses for a photo at home in Damariscotta, where he lives with his wife, Lisa. The active volunteer “has a real soft spot for helping people,” and uses his life experiences to mentor others. (Elizabeth Walztoni photo)

As Rick Hagen sees it, he just has a soft spot for helping. Over the nine years he’s lived in Damariscotta, the active local volunteer has made a point to support others using the lessons he learned from his life’s challenges.

“I get great joy from it,” Hagen said of helping people. “It makes me happy.”

Hagen is highly organized — even providing The Lincoln County News with a bulleted list of his life’s major happenings — and uses his skills to pitch in whenever he is asked. He said it is hard for him to say “no” to a neighbor in need.

He is active in the Damariscotta-Newcastle Rotary Club, The Second Congregational Church of Newcastle, the Pumpkinfest and Villages of Light teams, and the Wawenock Golf Club in Walpole.

Leading comes naturally to him as a result of his life experiences, Hagen said.

Hagen experienced teamwork early on, growing up as an athlete in Minnesota and Wisconsin playing basketball, football, baseball, track, and golf. After high school, his parents did not have money to send him to college, so Hagen enlisted in the Air Force in 1972 and stayed there for four years, two of those on reserve. He became the lead crew chief for training airmen to load munitions — weapons, bombs, and missiles — onto F4 Phantom aircraft to be sent overseas.

By 1978, Hagen had decided working with bombs was not in his future, but he felt he grew as an individual during his years in the service. The military helped him learn organizational and leadership skills, along with habits ranging from putting tools back where they came from to being polite.

Those skills helped Hagen work his way up in the civilian world after he left the Air Force to join BellSouth/AT&T in Miami, where he stayed for 37 years.

Hagen “did all kinds of stuff” for BellSouth, running large crews, call centers, overseeing hurricane relief efforts, and becoming a senior project manager for broadband architecture in the southeastern United States. Hagen said he would manage up to 400 people at a time, sharpening his abilities to lead and work with others.

In 1999, after 23 years of marriage, Lorraine passed away following years living with severe diabetes, which had led to the loss of both her legs and several fingers over the previous decade.

Hagen, who spent 10 years as Lorraine’s caregiver, said she was the bravest person he has ever known.

“I learned a ton and it’s done a lot for who I am today,” Hagen said. “I learned how you had to address adversity and be brave at the same time. She never complained. It taught me humility, and it taught me a lot.”

Two weeks after he buried his first wife, Hagen was brushing his teeth when he noticed an extra hole at the back of his throat. He was diagnosed with cancer and went through surgery and 42 rounds of radiation.

He married again in 2006 to Lisa. Today, Lisa Hagen is the executive director of the Damariscotta Chamber of Commerce and Information Bureau and another active local volunteer.

In 2007, his cancer returned. Hagen had four surgeries of 12 to 15 hours each, spending six weeks in the hospital and three months out of work afterwards.

After the first surgery, which “was just so awful,” Hagen said he had an “a-ha moment,” telling God that if he survived, he would dedicate the rest of his life to helping others. After relearning how to swallow and to speak, he went on to do exactly that, starting by mentoring others fighting cancer.

When he returned to AT&T, he was placed on desk duty, managing spreadsheets and conference calls after spending decades in the field. Soon, he felt he couldn’t do it any longer and asked to retire.

“Where do you want to go?” Lisa asked him, “Home to Minnesota, or your parents?”

The Hagens had spent time vacationing in Maine, first spending time in Bar Harbor and then working their way down the coast. They bought a house in Damariscotta at auction, gutted it, and moved in 2013.

Friends in Florida said to the couple that they were nuts, Hagen said, to leave Miami after 40 years for a town where they knew no one.

He and Lisa would reply, “We’re nice people. We can get to know people.”

They began by looking for a church, settling at The Second Congregational Church in Newcastle, which Hagen said they were attracted to because of its community programs. He has been a deacon there for eight years and is involved in pastoral relations and the governing assembly.

The Hagens now have a large group of 20 to 25 friends they are “always” with. They know everyone who lives on their street. They cook dinners together and share the holidays.

“I have more friends now than I ever have in my life,” Hagen said. “If I call and ask them to help me do something, they’re all there, and vice versa.”

He quickly became involved with the Rotary Club, serving as president from 2017-18 and receiving the Damariscotta Region Chamber of Commerce Volunteer of the Year award in 2017.

Villages of Light and Pumpkinfest became projects of Hagen’s as well. He and Lisa’s first visit to Damariscotta was during Pumpkinfest, he said, and they thought at the time, “What a great town.” Several years later, he was asked to get involved, and has since led the pumpkin deployment and derby among other events.

Hagen has also been active on the Wawenock Golf Club’s board of directors for eight years. This year, he even stepped in at the golf club to manage the pro shop and golf operations when there was an unfilled staff opening. He plans to do so again next year while a pro shop replacement is trained.

“Once I conquer something, I like to move on to the next thing, except for with golf,” Hagen said.

In his spare time, Hagen works on projects around the house, plays rock and roll music on acoustic and electric guitars, goes to local concerts with Lisa, and spends time with his neighbors and friends.

If he could do it all over again, Hagen said he would be a doctor. With his experiences caring for others and the treatments he has undergone himself, Hagen said he would use what he has learned to help in the field. Though the medical path has passed him by, he mentors others fighting cancer and cares his for friends and neighbors.

“I’m very thankful for the life I have,” Hagen said. “I’m thankful to even be here.”