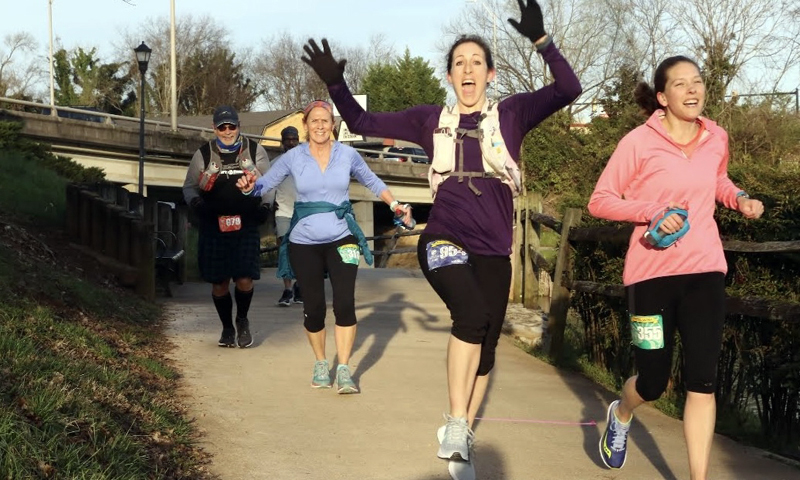 Amber Young runs a 100-mile race in Alcoa, Tenn. in March 2018. Young wears at least one article of purple clothing for every race in support of her daughter, who has epilepsy. (Photo courtesy Amber Young)

Seven years, nine months, and 29 days. That’s how long Amber Young has been a streak runner — meaning she runs every day, without fail.

Her love for running was not innate, but began when a friend wanted a partner for a 5K race. Young agreed, reluctantly, and she was hooked.

She decided to start her streak of running each day in 2013, when she saw an online challenge to run every day in March. When the month ended, she just didn’t stop.

“After a while, you get so used to doing it all the time that you don’t even think about it,” Young said. “You know that that’s what has to be done.”

Sometimes, Young can be found running outdoors as late as midnight, if the day got too busy. She has a treadmill that she sometimes uses when it’s icy, but she tries to run outdoors as often as possible.

One of her favorite things about running is the places it has taken her. Young has run races across the country, including a 100-mile run in Alcoa, Tenn. for her 40th birthday.

“That’s when I got into ultrarunning, and I never looked back,” she said. Ultrarunning involves any footrace longer than a marathon, which is 26.2 miles.

“The longer the distance, the better,” Young said.

She’s run through the slot canyons in Arizona and the beautiful vistas of Joshua Tree in California, but her most memorable race was running across the Grand Canyon with her best friend. They both brought their families along, and they have matching tattoos to commemorate the occasion.

“Some of the best friends I’ve made have been people that I’ve connected with through running,” Young said. Her friends won’t always run the long distances that she does, but they’ll join her for portions of races.

Young has run and walked almost every race in Maine, and particularly enjoys charity races, including the Maine Marathon in Portland and the Maine Epilepsy Walk in Freeport. Her daughter has epilepsy, and to show her support, Young wears purple — the color representing epilepsy awareness — in each race she runs.

Young is eager to start traveling again, when the COVID-19 pandemic is over. “I so look forward to having a destination race on the books,” she said. It gives her a goal to strive for and shakes up her normal running route. Her next adventure will be the 93-mile Wonderland Trail that circumnavigates Mount Rainier in Washington.

Although Young has traveled the country in the pursuit of beautiful places to run, her home base has remained the same. She grew up in Wiscasset, graduated from Wiscasset High School, and now resides in Newcastle with her husband, Joe Dalton.

She joined the U.S. Navy fresh out of high school and served for 5 1/2 years. “There was no option of going to college for me, and I needed a good job,” Young said. “I had some friends who were joining and it seemed like a good adventure.”

At 17, enlisting was the most nerve-wracking thing she’d done. “I’d never flown on a plane, I’d never been away from my family,” she said.

She was stationed in Great Lakes, Ill. and then in Washington state, working as an aviation administrationman. The job entails administrative duties, such as scheduling aircraft inspections.

Both of Young’s children — Laura, 22, and Erik, 19 — were born during her time in the Navy. When she left, she struggled to find work and needed a way to support her kids. Her mom and sister were both certified nursing assistants, or CNAs, and the job’s flexible schedule meant Young could work nights and still spend time with the kids.

LincolnHealth’s Miles Campus in Damariscotta was offering a free CNA course, and she signed up. Eighteen years later, she works for MaineHealth Care at Home, providing in-home hospice care.

“Taking care of people at the end of their life is so important,” Young said. “You don’t have to end your life in the hospital — you can have your family around you.”

She said that many people find the most comfort at home, and she is glad to help them stay there.

Her patients have always loved hearing about her running adventures, and they motivate her to keep going. “I run for so many people who can’t,” she said.

“All the stresses in life, running really helps with all that stuff,” Young said. “I work in hospice and take care of people who are dying, and being out there really puts it all in perspective. I think the running keeps me sane.”