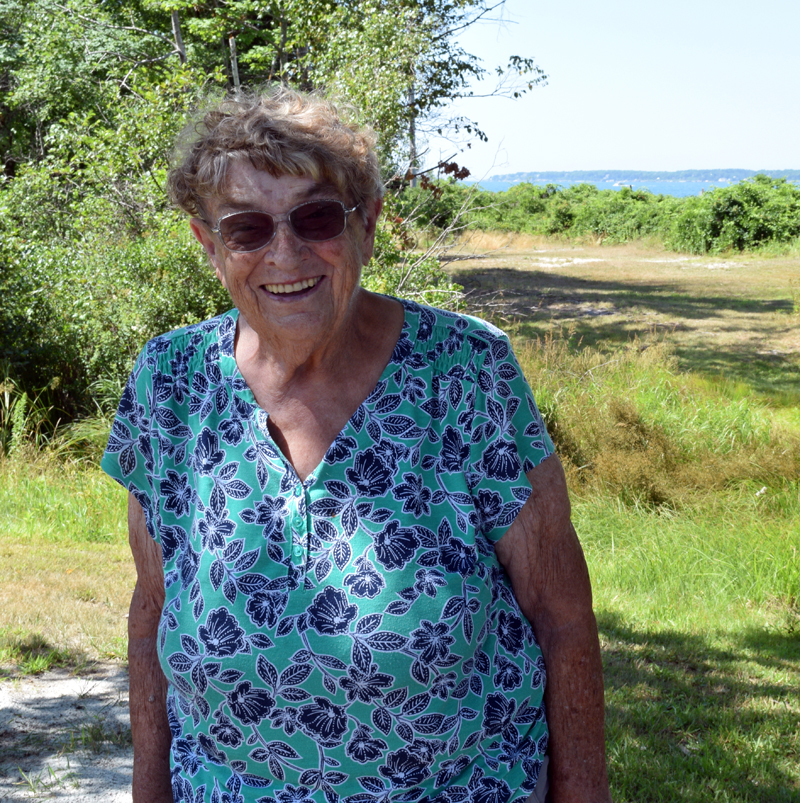 Sandra Lane, of Bristol, stands at Pemaquid Beach on Friday, July 29. Lane is currently serving her fourth term on the Bristol Parks and Recreation Commission. Before “retiring” she drove a school bus for more than 25 years, serving various area schools. (Evan Houk photo)

Born and raised in Pemaquid, Sandra Lane has been involved in making Bristol a better place and inspiring future generations for nearly her entire life.

Sandra’s son, Russell “Russie” Lane Jr., said she was born on Bradley Hill Road overlooking Pemaquid Harbor and has never stopped watching over her hometown since.

“She never stopped looking over it after that. She’s always kept an eye out for anyone that needs help or is hurting,” Russie Lane said.

Sandra Lane became a bus driver in 1972 at the Longfellow School for disabled students in Bristol Mills and soon became attached to the kids. She continued to drive bus for the next 25 years—at Bristol Consolidated School, Nobleboro Central School, and Great Salt Bay Community School in Damariscotta.

The principal at the Longfellow School simply told her and other women working there that they needed to start driving bus.

“He said ‘just take it and go,’” Sandra Lane said during an interview at Pemaquid Beach on Friday, July 29. “It was kind of funny, but we mastered that.”

During the interview, she became distracted a few times by a group of students filing onto the beach boardwalk for a field trip, smiling and clearly enjoying the children’s pure mode of expression.

Sandra Lane also helped with cub scouts, made fundraiser dinners for various causes, and has always volunteered and been able to raise funds for a worthy cause.

“She’s hard to say ‘no’ to,” Russie Lane said. “Everyone knows she’s asking for a worthwhile organization.”

She enjoys shaping children and nudging them in the right direction and seeing how they turn out when they grow up.

“I see them grow up,” Sandra Lane said. “A lot of the kids, they still love me.”

“She treats everyone like they’re her grandkids,” Russie Lane said.

Sandra Lane originally attended the McKinley School in Pemaquid, before switching to Mavoshoon School in New Harbor, where her mother worked.

She graduated from Bristol High School in 1956, where she played basketball and softball. She had 11 people in her class, many of whom went to college.

“I had no desire to go to college,” she said.

Sandra Lane was instrumental in organizing a Bristol High School reunion in 2019, 50 years after the school closed, in which between 300 and 400 people attended.

“It was lonely out there,” Lane said.

Sandra and Russell’s son, Russie Lane, spoke to some of these experiences in his book, “Snow Angels on the Moon.” The book recounts a story about how Russell Lane Sr. saved five young campers from almost certain death when their sailboat overturned in the ocean in the summer of 1958.

He said that if it wasn’t for his mother’s watchful eye toward the ocean, the campers would have never been seen.

“She was the one who noticed them out there,” Russie Lane said. “If it wasn’t for her looking out there, they never would have been rescued.”

Sandra Lane has been involved in organizing the annual Olde Bristol Days celebration since possibly even before Russie was born, he said.

She is serving her fourth consecutive term on the Parks and Recreation Commission, and is working to complete a Veterans memorial walk behind the Ellingwood Information Center where the Parks Department is housed.

“I need it for my health,” Sandra Lane said of her continued activity at 84-years-old. “I need it to keep going.”

For this year’s Olde Bristol Days celebration, she was chosen to lead the parade as Grand Marshal.

She saved the money she received when her husband died in 2017 and built upon it with donations to make her idea for a Veterans memorial walk a reality. The walkway will be made of stone and will run behind Ellingwood with benches and flowers, she said.

A new tree near the location of the Veterans walk was planted and dedicated to Army Sgt. John Steer last Veterans Day.

Sandra Lane enjoys spending time with her poodle, Okie– the “Okie from Muskogee,” she said. She also enjoys seeing her three grandchildren and two great-grandchildren whenever possible and spending time at her home on Biscay Pond.

“I’m pretty proud of myself to do what we’ve gotten done,” Lane said of her work in the town.