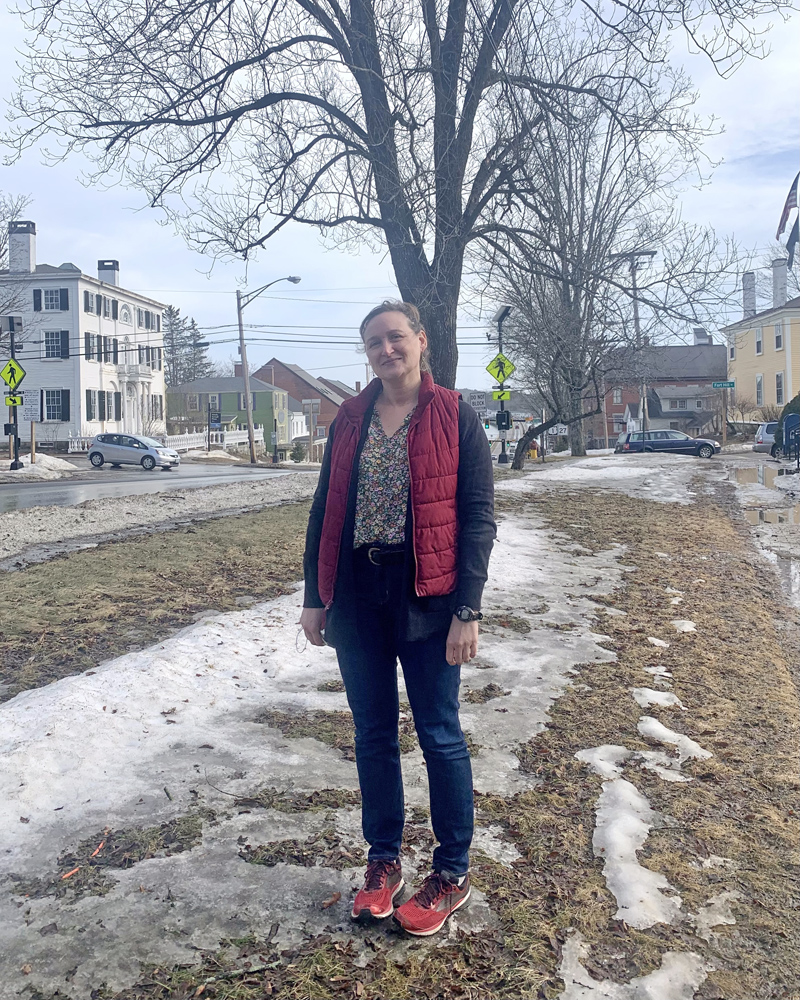 During quiet moments in her day in Wiscasset, Lincoln County Historical Association Executive Director Shannon Gilmore goes on walks. She walks past the cemetery up to the Old Jail on Federal Street, one of LCHA’s three museums.

“When I have an opportunity to walk from my office up to the jail, I take it,” said Gilmore. “I’m looking around at every house, and the cemetery there, kind of trying to glean what I can from just looking.”

It’s a practice tied to Gilmore’s interest in the lesser-known, lesser-told stories. To look beyond the architecture of a building, for example, and to think: Who might have lived here and why? What labor went into constructing this building? What were the stakes? Who might have been displaced? How did the environment respond?

“Pretty much anytime there’s a story or community that’s lesser known, that’s the one I want to learn about,” said Gilmore, creating an on-the-spot catalogue of ways to shift the spotlight.

Poor people’s history, labor history, women’s history, histories of people who have lost their families and are left on their own, of industrial towns after their industry leaves, of encounters with nature, etc. She is concerned about a lack of collective knowledge about Black history – and indigenous history.

As LCHA continues its mission to “collect, preserve, and interpret,” these are stories Lincoln County will be hearing and seeing more of with Gilmore at the helm.

Since June, Gilmore, who studied history at Bowdoin College and is currently enrolled in a Master’s of Historic Preservation Program at Goucher College, has been exploring Wiscasset on foot.

The rest of Lincoln County she has been getting to know through the extensive network of volunteers at LCHA, community Facebook groups, and, when she can, visits to each town.

Gilmore was raised in Kingfield, “a small town near Sugarloaf,” as she put it. A neighbor introduced her to local history. A passion grew.

“My next-door neighbor was a volunteer at my local historical society,” said Gilmore. “I was eight or ten or something, and she would bring me with her there.”

Gilmore’s interest in place never waned. At Bowdoin, she returned to Western Maine to study the impact of Sugarloaf. She looked at archives, spoke to community members, did oral history interviews, asking: “What would this town have been like without this ski resort here?”

This interest drove her decision to study remotely at Goucher College while she continues interpreting histories and holding space for preservation and conversation.

“Part of what interests me there is kind of the idea of preservation of place, but not necessarily based on – I love glorious architectural building – but more based on local significance, those stories of what does this place mean, culturally, to the local community?” she said.

After graduating, she made her way to Montana, where she did historical research for an environmental consulting company. She described poring over maps and diaries from colonists’ first encounters with Western landscapes, including the journals of Lewis & Clark.

But more local history – archives preserved by community members, stories held in family photographs, in the land – remained just below the surface. Gilmore said it was more of a hobby while she raised her children. But getting involved at Pejepscot Historical Society brought that interest to the surface again.

“When I joined the board at Pejepscot, one of my passions is to focus on underrepresented stories, and along with that, to encourage people who have not previously realized history was interesting to kind of jump on board and learn,” said Gilmore.

At Pejepscot, Gilmore worked on outreach and development, bringing people new to the area, new to history, or new to both into the conversation.

“That’s what I love,” she said, of engaging directly with neighbors, community members.

Including LCHA volunteers, who she is nearly awestruck by.

“So much of what we do here is volunteer driven,” said Gilmore. “I can kind of try to, like, steer the ship towards what interests me. But I’m going to inevitably find a volunteer raising their hand and having a different idea – which is actually so cool.”

As announced in LCHA’s latest newsletter, the organization is currently preparing to launch a series on women writers of Lincoln County, which will include interpretive programming, and, hopefully, traveling exhibitions.

Gilmore spoke about her commitment to inviting all the people of Lincoln County into her circle, into her conversation, into the work of the LCHA.

“It will be a slow process,” said Gilmore of the series’ launch. Alice Smith Duncan, historian and volunteer at the LCHA, has been working closely with Gilmore on the project.

“A lot of people know about their local woman author, maybe their name,” she said. “But when you put everyone together and look at it thematically, I think it’s really exciting to see that this community actually has a heritage connected to the literary world.”

There are lots of interesting male writers here, she added, “but right now, we’re not talking about them.” This collaborative curatorial and community-sourced project is about getting women writers’ stories out because, for so long, they have been underrepresented, and not just in Maine.

Gilmore searched for the name of one of the writers whose name she had just learned. The series ranges from such well-known writers as Rachel Carson to those of lore like Annie Wilkins, who rode her horse across the country in 1954 after losing her family and friends and her Maine farm to back taxes and receiving a dire medical diagnosis.

Journalist and author Elizabeth Letts chronicled Wilkins’ experience in the 2021 publication “The Ride of Her Life: The True Story of a Woman, Her Horse, and Their Last-Chance Journey Across America.” Letts, as part of the project, is scheduled to speak this summer.

“Someone new comes to the surface every week,” said Gilmore, speaking of both historical and contemporary writers.

When introducing herself to some community groups online, in Lincoln County towns farther from Wiscasset, the response Gilmore received was: Come up sometime, and we’ll show you around.

“I’d really love to do that,” she said, ready to listen.