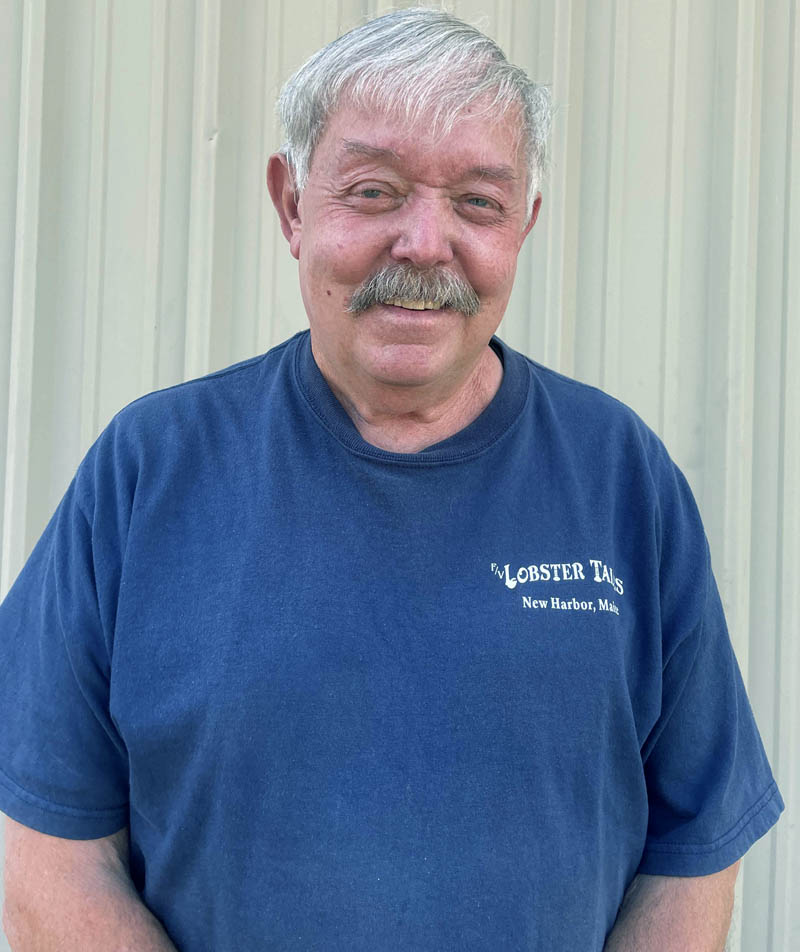 The story of a shark attacking a seal off Pemaquid Point earlier in July caused little alarm but prompted a great deal of interest among local readers. New Harbor native Brian Sawyer took a particular interest, having played a role in a shark story that made the front page of The Lincoln County News in 1961.

The front page of the July 27, 1961 edition featured a photo of the shark, hanging upside down at what is now Shaw’s Wharf in New Harbor.

According to the article, “Man-eater caught off New (Harbor),” Gerald “Jerry” and Douglas Brackett harpooned the shark and hauled it aboard their 28-foot lobster boat following a five-hour struggle.

Bernard E. Skeed, then director of the U.S. Fish and Wildlife Biological Laboratory at Boothbay Harbor, confirmed it was a great white shark, “not common in Maine waters.” The shark measured between 22- 24 feet long and weighed an estimated 1,700 pounds; a compromise figure, it was reported, derived from guesses ranging from 1,600 to 2,200 pounds.

The Bracketts brought their prize to what was then Small Bros. Wharf, from where it was ultimately purchased by Creamer’s Lobster Pound owner Paul Creamer

According to the article, Creamer said he planned to sell the shark meat for 38 cents per pound. The shark’s liver weighed 128 pounds and was reportedly going to be sold for 75 cents per pound, both being wholesale prices. Creamer said the shark’s stomach was filled with Maine shrimp, which was unusual because “we are not supposed to have any shrimp up this way at this time of year.”

“Creamer, who has fished or dealt in fish all his life, said it is the largest shark he has known of in this coastal section,” LCN reported.

“Doug Brackett harvested it.” Sawyer said, who was 14 years old at the time. “I had a friend with me and we saw it as we were mackerel fishing right off Brown’s Cove … My friend Jerry (Gerald) Brackett; we were mackerel fishing as we were wont to do in a flat-bottom skiff, halfway up to Round Pond and we noticed a very large shark fin cruising along, and I said ‘whoa.’

“This is like something out of Disney movie. It was very large, there wasn’t any mistaking what it was so we went over and looked at the thing. We were curious so we cut up a few mackerel and dangled it in the water and he made a big circle and came back and that time he went under the boat. The boat was 14 feet long and this thing is longer than that and I said ‘maybe we hadn’t ought to be doing this.’”

As it happened, Doug Bracket was hauling traps nearby. Informed of the shark’s presence, Brackett said “he’d give it a go,” Sawyer said. Brackett returned to New Harbor, picked up a harpoon and returned. Jerry Brackett transferred over to Doug’s boat to help with the steering.

According to the LCN article, the Bracketts used a rope to connect the harpoon dart to some barrels, which floating, allowed the fishermen to track their prey. Sawyer said Doug Brackett used a chain to connect to the dart.

“I do recall when he stuck that shark the water flew and the blood flew,” Sawyer said. “Doug hailed me and said ‘I want you to go back to New Harbor and get my hunting rifle off my mother’ … I go to New Harbor. I ran to his house, a quarter-mile up the road or better. I go through the door and look at his mother and I say ‘Dougie’s harpooned a shark and he wants his gun.’ She gave it to me. She never blinked an eye. She knew her son pretty well.” 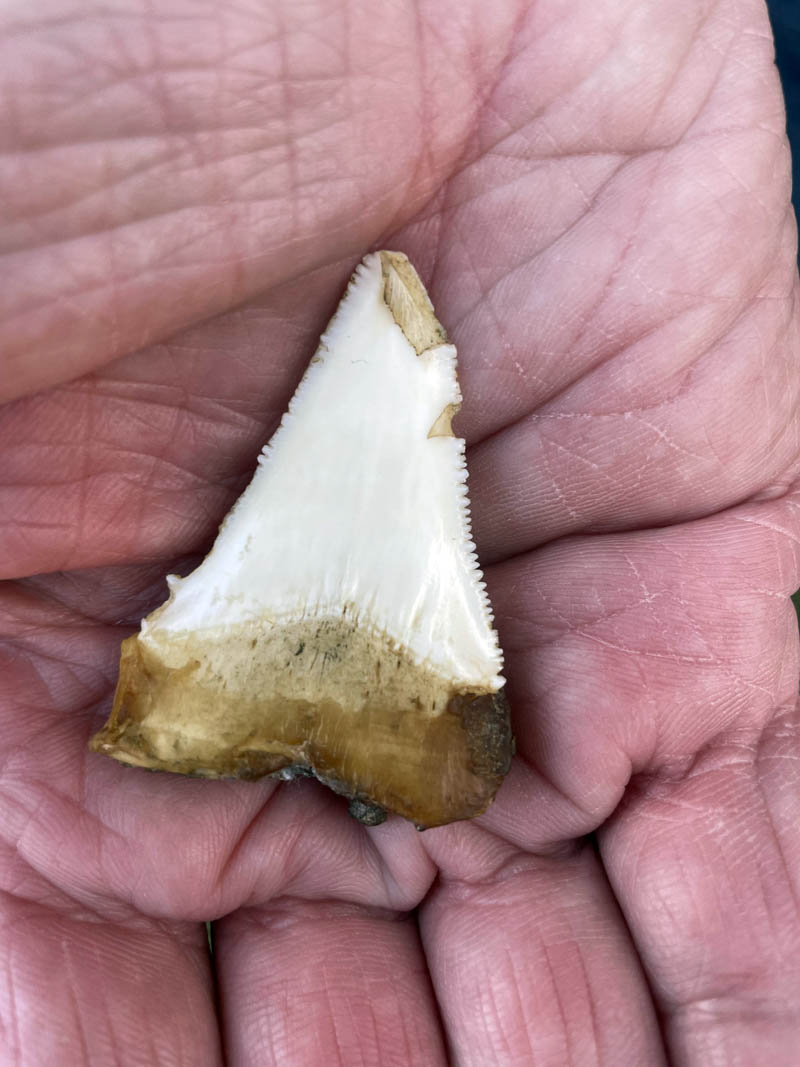 Brian Sawyer still has a tooth taken from the great white shark caught off New Harbor in 1961. The shark’s teeth measured 1 1/2 inches. “You don’t forget a sight like that,” Sawyer said. (Sherwood Olin photo)

By the time, Sawyer returned with Brackett’s gun, the scene of battle had drifted from Brown’s Cove out around Louds Island. Brackett had managed to haul the shark up beside the boat, and Sawyer remembers seeing the shark with the chain between his teeth.

“They finally dispatched him and got him on board took him to Shaw’s and heisted him up,” Sawyer said. “As I recall, the liver filled a 100-pound lobster crate full.”

Unfortunately, Sawyer was not among those who had time to leisurely take in the rare sight.

“I was a bit of a procrastinator in those days,” he said. “When I got into the dock that day my dad came down and grabbed me and said ‘you’ve got two lawns to mow,’ and off I went, so I only had a glimpse of that shark out of water. It wasn’t his fault. He apologized later. He said he didn’t know it was such a big deal.”

A life on the water

Sawyer started fishing out of New Harbor when he was 11 years old. He retired in 2019 and sold his boat this past winter.

A New Harbor native, Sawyer graduated from Bristol High School in 1965. Planning on a career in education, Sawyer attended the University of Maine for two and a half years, but his heart just wasn’t in it, he said.

“I just missed being around the harbor,” he said. “I planned on being a history teacher but I was a fish out of water, so much so, right in the middle of the Vietnam War, I bailed out of there. I was 4F so I didn’t go anywhere, but I would have gone at the time.”

Back in New Harbor, Sawyer went into business for himself as a commercial fisherman. For many years he owned his own boat, Lobster Tails, only selling it only this past winter in 2021 to a young man who is using it today. Sawyer can sit on his front deck and watch his former boat come and go.

“I was kind of a slave to the business,” he said. “I think a lot of people were.  If I took time off, my wife and I would go up north looking for moose for a couple of days and that was it, so we never got a chance to do an awful lot. But then again, it was a day fishery, so I had my shoes in the home and had supper on the table, and was very lucky to have a house on the ocean and those good things.”

Retired though he may be, Sawyer admits to feeling a familiar twitch in 2021 when lobster prices were comparatively astronomical. Last year at this time, lobsters were selling for more than $5 per pound. This year, as of July 13, the boat price for shedders in New Harbor was $3.40 per pound. The lower market price combined with the higher cost of fuel and bait means fishermen are hurting, Sawyer said.

“It is so hard to predict nowadays,” he said. “New boats can run a million dollars these days. That’s not uncommon. There are a couple in New Harbor that are tickling that, so how do you plan a future with payments of that size on something, when you don’t know what’s going to happen with the whale thing and the windmills that are going to populate the Gulf of Maine? It takes a lot of courage to get under that kind of money.”

“This whale thing, I’d need another two hours,” he said. “I think it’s over the top. In all the years I fished, I’ve seen all different kinds of whales but I have never seen a right whale and I don’t think I ever talked to a seiner or a tuna fisherman or anybody else who has ever seen one. That’s rare. And no right whale has ever been fatally entangled in Maine … When I see the rulings and judges saying ‘Geez, you’re not doing enough,’ I’m thinking what do you want from us?” 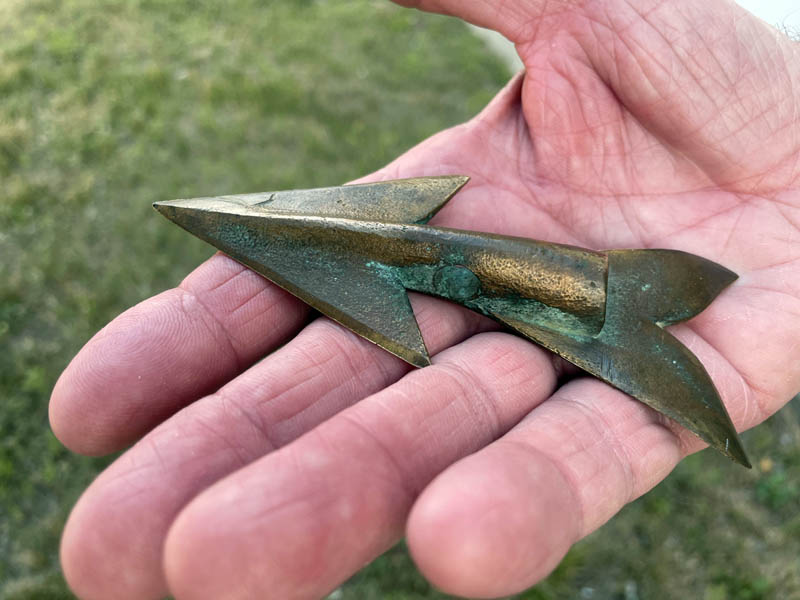 According to Brian Sawyer, Doug Bracket used a harpoon dart much like this one to land a great white shark off New Harbor in 1961. (Sherwood Olin photo)

As for plans to establish a wind turbine farm near Monhegan Island, a joint venture between the University of Maine and New England Aqua Ventus, Sawyer said he is a proud Mainer and a proud UMaine alumnus, but his heart is with the fishermen.

“I think it is an eco-terrorism type thing, I really do,” he said. “In my mind it kind of looks like they want to get these fishermen out of the way so they get the Gulf of Maine right full of windmills. I can see the University of Maine one right from my house I’m sure. It’s going to be three miles below the island and over 700 feet high.”

Looking back over his life and a career, Sawyer said life has definitely changed since he was a younger man. At one time, the sounds of children playing were commonly heard on McFarland Shore Road, where Sawyer and his wife of 54 years, Linda, make their home.

Today not only are there no children in the neighborhood, the Sawyers may be among the last local family to own property on the road, Brian Sawyer said. Everything else has been purchased by out of state residents. Like it or not, change will always happen and it continues to happen, he said.

“When I was a younger man there were herring seining,” Sawyer said. “There was X number of sardine factories up and down the coast. There was a groundfish fish fleet out of New Harbor; There were all kinds of groundfish and so forth and there were a number of fisheries on these smaller peninsulas, and over the years that has all gone away.

“I can’t envision these local communities without the lobster industry,” he said. “It’s still the lifeblood of a lot of those communities. It is still very important. New Harbor alone catches well over a million pounds a year. That’s a lot to throw into the economy, and what fishermen were there, if they were gone it would certainly change the nature of whole coast, to the detriment of everybody.”