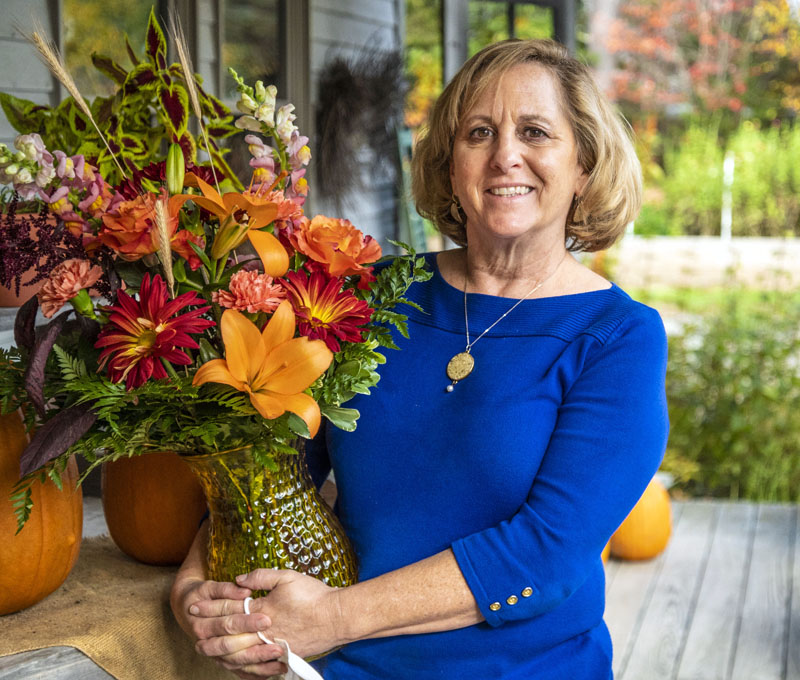 Shelley Pease’s father called her “Flower” when she was a girl, but that was the only real connection she had to the blooms that became her livelihood and her claim to fame.

She was shopping for shoes with a girlfriend one day and somewhere in the conversation as they shopped, her friend mentioned knowing someone who knew a florist.

Pease called her mother and told her she wanted to be a florist and her mother said, “You don’t know a daisy from a carnation.”

“But I will,” Pease replied.

That’s how it all started.

Pease grew up in Appleton, “raised by two loving and supportive parents.”  She remembers raking blueberries at the age of 10, riding her horse, helping with livestock, with the gardening and baking. 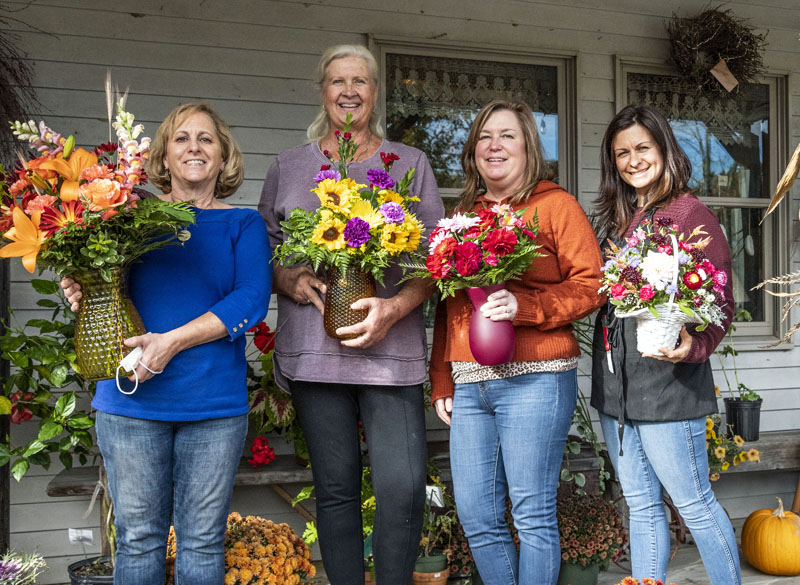 From left: Shelley Pease, Nadia Colvin, Leeanne Mank, and Lorielle Barter stand in front of Shelley’s Flowers & Gifts in Waldoboro. “The real deal is everyone who works here,” Pease said of her dedicated and talented staff. (Bisi Cameron Yee photo)

Pease said her father was a logger, “very no-nonsense.” He gave her and her sister and brother a good foundation. They learned how to work hard.

“My parents taught me you’re responsible for you,” she said. 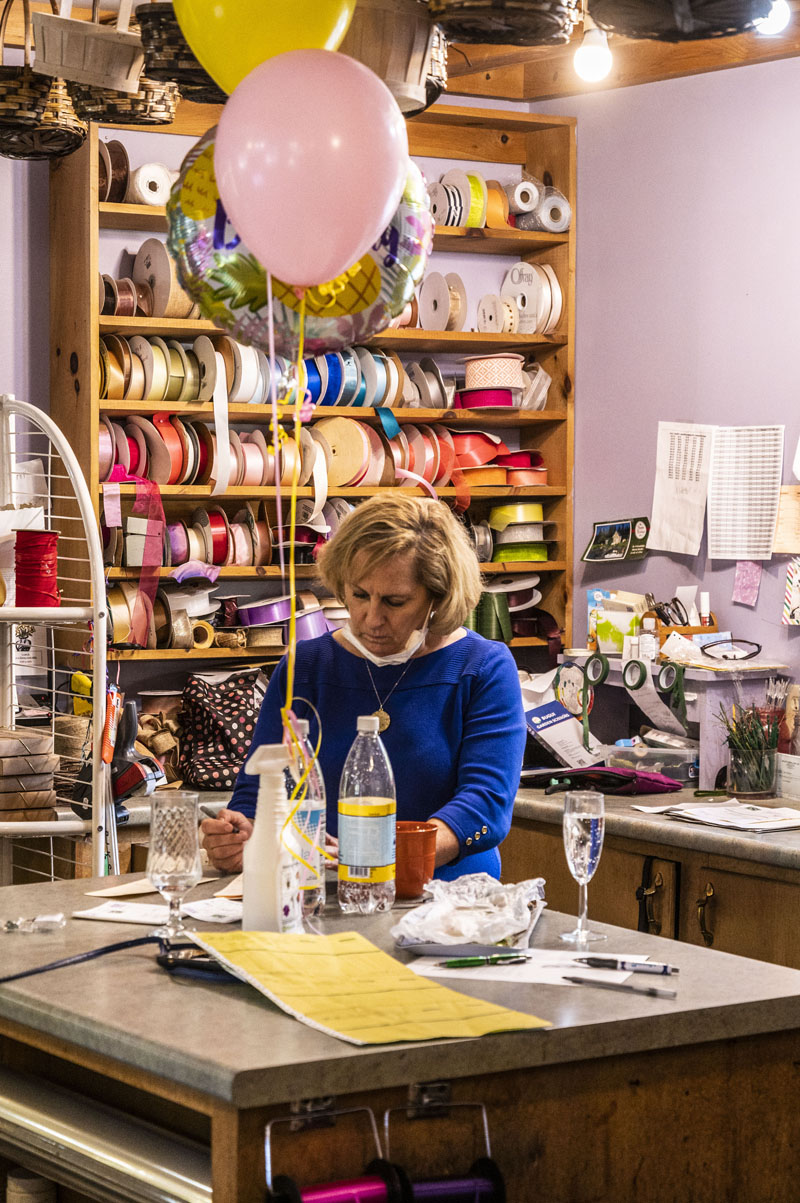 The independent streak fostered by that maxim is still there.

Pease went to high school in Camden, and earned an associate’s degree in business from the University of Southern Maine. After her shoe shopping epiphany, she attended a floral design school in Boston. But she couldn’t get a job in the industry.

Then her grandmother offered to loan her the money to start her own business.

Pease’s grandmother lived in Waldoboro, and Pease said she didn’t ever think she’d end up there.

“It wasn’t glamorous enough for me,” she said.

She had friends who went away to college, who were working in offices, dressing up every day. They were in Portland and Boston. They were somewhere else, doing something else.

“I was in jeans, selling Avon, working at McDonald’s,” she said.

Pease accepted her grandmother’s offer and at the age of 20 she opened her first shop in Waldoboro. “And here I am 39 years later, happy as anything.”

“I always knew I’d own a business,” she said. The first location of Shelley’s Flowers & Gifts was a rental, but it was successful and she was able to purchase a building in a new location.

The new location was successful, too, and the business outgrew it. So she upgraded to her current location on Route 1.

Pease spent those 39 years becoming an expert in floral design. She constantly sought out opportunities to further her knowledge: Industry publications; floral education workshops; mentors who helped her grow.

Her career afforded her the opportunity to visit design schools and floral businesses in exotic places like Ecuador and the Galapagos Islands. A trip to the Netherlands, known for its beautiful bulbs and tulips, was canceled due to COVID.

But home is Waldoboro. She lives a mile up the street from her shop.

Pease said she moved to the town so she could vote on issues that might affect her business. And she likes being part of the small working class community. She likes going to the store and catching up with neighbors and friends while she shops for groceries.

Pease thinks of Waldoboro as “kind of an island between Lincoln County and Knox County.” That central location is one key to her success. 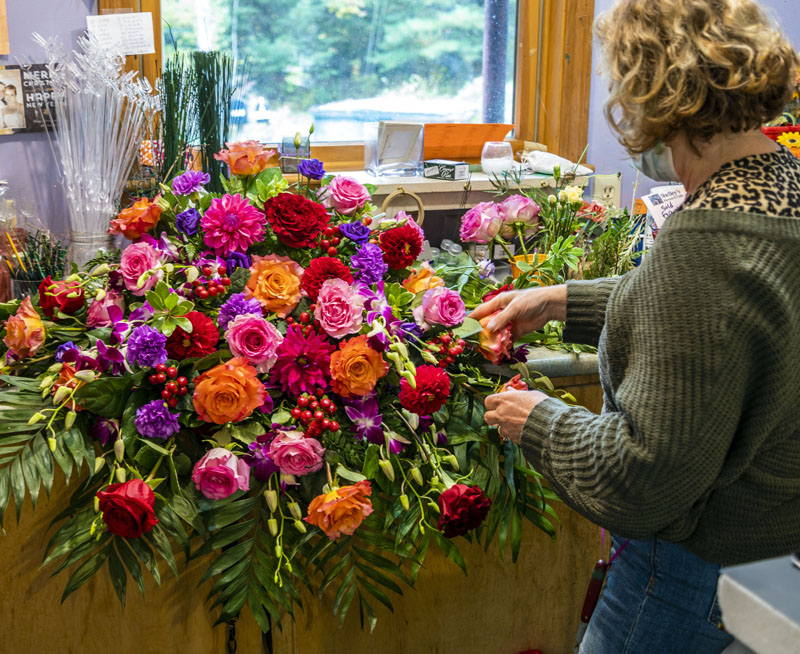 But smarts and a good work ethic are what elevated her to become one of the premiere florists in the region. The quality of her arrangements got her noticed by national publications. Her work has been featured in industry magazines like Retail Florist, Florist Review, and Island Weddings. She has been recognized by bridal website, Wedding Wire with a Couples’ Choice award for at least the last six years.

Pease described herself as determined, “strong like an oak, flexible like a willow.” She said she’s probably not easy to work for because she expects her staff to be as hard working as she is.

Most of them have been with her for years, and she knows their value.

“I’m just a face,” she said. “The real deal is everyone who works here. They keep me on my toes, they’re dedicated.”

Pease doesn’t have a favorite flower; she likes the variety. “I always look forward to the change of season, and the different flowers.”

She grows some on her own – dahlias, peonies, hydrangeas, zinnias, asters in a raised bed on the side of the shop.

She likes picking the flowers, even in October. “I’ll go out in the morning and pick buckets full.”

While she is known for wedding flowers, Pease said the meat of her business is the daily deliveries. Waldoboro is a hub and she delivers to 12 towns in Knox, Waldo, and Lincoln counties. 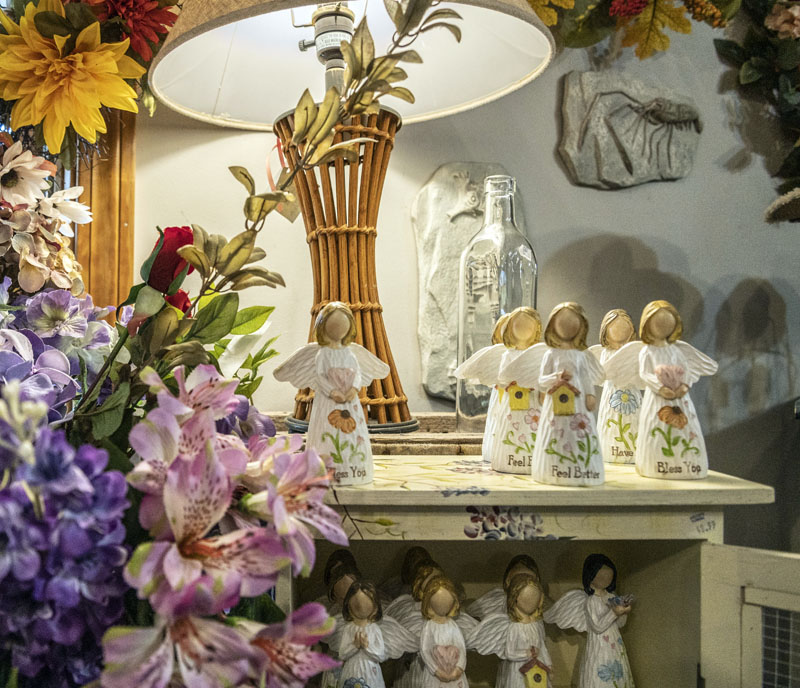 Still it’s the set pieces that Shelley’s Flowers & Gifts is known for. Shelley and her staff are used to doing elaborate weddings with floral walls, floral chandeliers, and specially designed arbors.

Floral designer Nadia Colvin recalls working on a wedding in Cushing for a bride and groom who wanted to be married on the water.  There were four or five finger lake docks and the couple got married on a sailboat between two of them.

Pease and Colvin and the team at Shelley’s Flowers & Gifts had to take a boat out and build topiaries and floral displays of white lilies, keeping their balance as waves rocked the nautical venue.

COVID-19 didn’t slow Pease down. She said the shop benefited from its robust online presence, and the fact that she offered delivery and curbside options. And there was a need for the product she offered.

“Flowers are all about feelings,” she said. “People wanted to express their emotions.”

Those everyday orders kept her doors open through the pandemic. And while she may have lost out on all the events when COVID hit, “this year people wanted to celebrate double.”