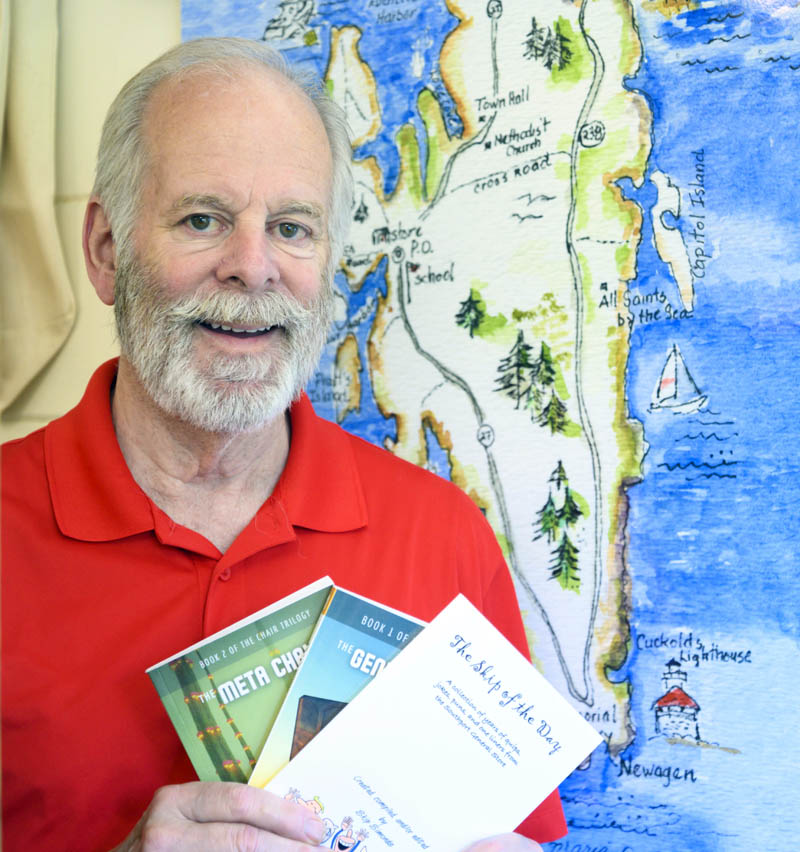 Skip Simonds holds a selection of his writing while standing for a photo in front of a map of Southport at the town’s general store on June 30. He is currently working on the third book of his science fiction series, but “The Skip of the Day” is the local bestseller. (Bisi Cameron Yee photo)

William “Skip” Simonds said his parents had him late in life and they figured he would be the “skipper of the ship.” Simonds said there were so many Williams in his family that every variation of the name was already in use. “So I became known in the crib as “The Skipper,” or “Skip,” he said.

“People assume that I’m a native Mainer and I’m not … I am that successful hybrid that started out as a summer person and ended up as a year round resident,” Simonds said.

He may not be a native Mainer, but Southport has been a part of his life since Simonds was 3 years old when his mother’s best friend secured a job at the Newagen Seaside Inn and invited the family up from North Carolina for a visit.

Simonds moved to Portland after college and has lived in Maine for most of his life. A 10 year stint in Los Angeles almost wooed him away with its temperate climate and lack of mosquitoes, but those early Southport roots were strong. When he retired from his career with disability insurance provider Unum in 2012, Simonds purchased that summer cottage of his youth and moved back to the Pine Tree State.

While Simonds now lives in Boothbay, he is still chair of the Southport Island Planning Board. The town’s select board wanted to keep him on despite the fact that he was no longer a resident.

“I’m very proud of that,” Simonds said. “I think it speaks to the degree with which I love the island of Southport. It is my home of all the homes I’ve had.”

He said he still owns land in Southport: a burial plot in Decker’s Cemetery. “So ultimately I’m going to be moving back.”

Simonds has another strong connection to the island. Oliver and Janet Cusano, owners of the Southport General Store, needed some help and asked him if he would work one day a week on the register. “I fell in love with it and all the people who come in. It’s like a huge family… I love being a part of it,” he said.

Six years later Simonds is now the wine and beer manager at the store. He brings with him expertise gained while managing a restaurant in Chapel Hill during his college years, calling some of the knowledge gained back then “time-insensitive. It doesn’t age.”

Simonds curated the store’s wine selection with an eye to value “so that any wine can taste better than the price indicates…When I can find a $15 bottle that tastes like a $30 bottle – that’s what I really love.”

Simonds is also responsible for another category of merchandise that can be found on the shelves of the Southport General Store. “All I know is I must write,” Simonds said of his forays into publishing. 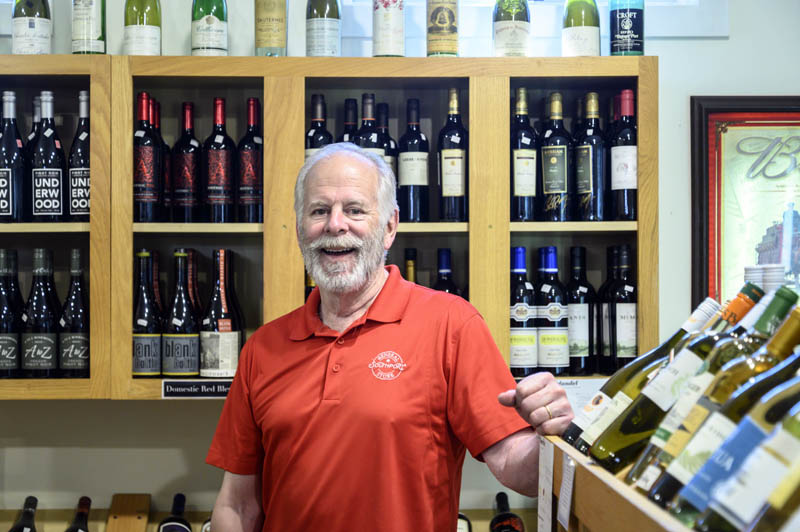 Skip Simonds stands for a photo in the beer and wine department of the Southport General Store on June 30. Symonds curates the department with an eye to great values: a current favorite is a pinot noir called Angelas Ink. From your first sip to your swallow to the aftertaste, it’s just gorgeous, he said. (Bisi Cameron Yee photo)

While he has written a number of books on a variety of topics, he has the most fun writing science fiction where his love of writing meets his need to communicate ideas and concepts that are precious to him. “There’s no other genre that allows you that sort of freedom,” he said. 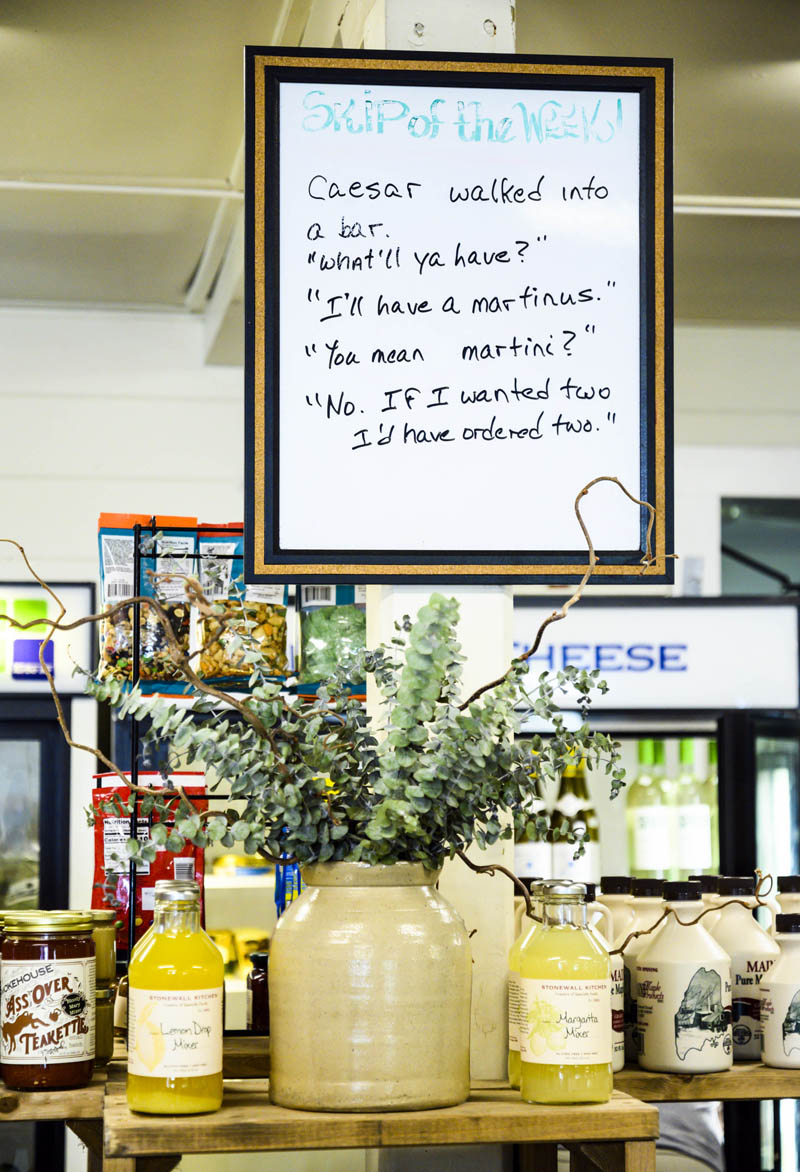 A dry erase board holds “The Skip of the Week” at the Southport General Store on Aug. 3. The small witticisms have become a ritual part of any visit for many of the store’s customers. (Bisi Cameron Yee photo)

He was first introduced to science fiction in the third grade when he checked “Young Visitor to Mars” out of the Calvin Coolidge Elementary School Library “the first day we had library privileges.” He renewed it every week for the rest of the year.

“You can’t forget science fiction. It’s indelible. It stays with you,” Simonds said. He still recalls snippets he read as a kid. “I think because … it’s an extension of the possible.”

He started writing science fiction while traveling for work. “I would just crack open my journaling software and I would write a chapter of a make-believe Tom Swift type,” he said.

After 20 odd trips he completed “Fred and Wally and the Space Pirates,” which he categorizes as “bubblegum sci-fi.”

His next foray was more ambitious. He began a trilogy loosely based on a series of men’s seminars he held while pastoring a Portland church. According to Simonds, the seminars delved into four major archetypes that dominate the male psyche – the King, the Warrior, the Sage, and the Lover.

Simonds admires C. S. Lewis, who also wrote science fiction, for his ability “to write in the most erudite ways while remaining comprehensible.” However, it was a “Star Trek: the Next Generation” episode called “The Host” which really fired his imagination and planted the seed for his series. The episode explored the concept of love in a way Simonds found quite powerful.

For Simonds, all good science fiction is allegorical. The message he wants to convey in his own work is that “if you really want to make others a priority in your life it’s actually the most rewarding kind of life that you can live.”

The series is available at the Southport General Store and on Amazon with the third book coming out in the spring of 2023.

His best-seller though, at least at the Southport General Store, is based on his “Skip of the Day,” which can be found posted on the store’s dry erase board, just past the newspaper rack.

The Skip of the Day originally came about through Facebook, an online space that Simonds initially found to be a congenial way to stay in touch with friends. When it began to morph into more of a platform for airing political opinions, Simonds decided he was not going to participate, but he wasn’t going to retreat.

He began to post small witticisms overheard at Hannaford’s or Grover’s Hardware. “I would just keep my ears open because people are saying funny things all the time,” he said. People responded to his posts, often with quips of their own and composing the humorous posts soon became a daily habit. 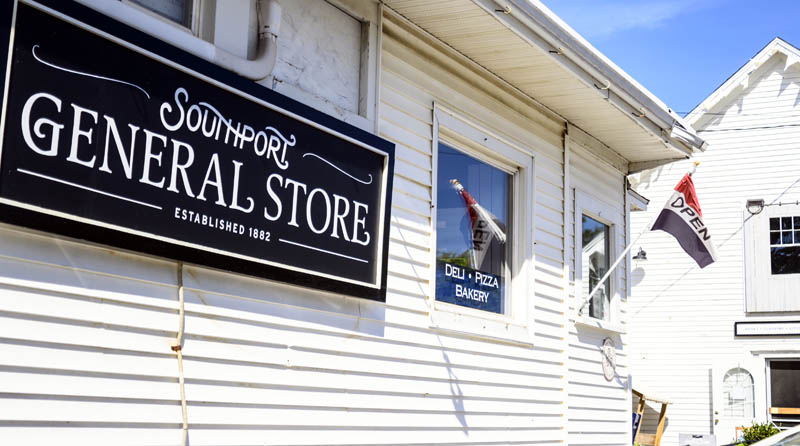 An open flag floats at the entrance of the Southport General Store on August 3. Skip Simonds has worked at the store for the last six years and enjoys interacting with customers, friends, and neighbors on a regular basis. (Bisi Cameron Yee photo)

When he started working for the Cusanos they encouraged him to transfer his daily post to a whiteboard in the store, and the Skip of the Day was born.

It became a routine for the store’s customers, Simonds said. “People would come in, they would glance at the papers to see what the headlines were … (then) look straight ahead to see what the Skip of the Day was and either groan or laugh or shake their heads.”

In addition to his already full roster of achievements he recently added becoming the #1 male singer in the state of Maine for classical singing, age 33 and up, as chosen by the National Association of Teachers of Singing. His wife Betsey deGroff who is a voice teacher and choral director coached him to the win.

He hit another life goal on his bucket list on April 8, 2021 when he made a hole-in-one at the Hillandale Golf Course in Durham, N. C.

Simonds recalled standing at the first tee thinking to himself “You just need to give up on this idea that you’re going to get a hole-in-one before you die because you’re just not.” He was wrong. When he hit the back nine he teed up for a par 3 hole and finally made the shot he’d been chasing for over 50 years.

“This shot has a particular name among amateurs,” he said. “It’s called a worm burner… It’s just a rocket that goes right along the ground bouncing and everything.”

Simonds watched as the ball traveled down the fairway, passed through a bit of the rough, went up the side of a sand trap and did a little curl around the edge before finally landing on the green where he lost sight of it.

He didn’t think he made it but when he checked the cup, the ball was nestled snugly within. Simonds burst out laughing.

“I had this mental picture that if I ever got a hole-in-one it was going to be this beautiful arcing shot that was going to just fly right to the green, bounce once, maybe twice, and then into the hole,” he said. Instead he hit what he called “the ugliest hole-in-one that you can possibly imagine.”

Between the store and the writing, the singing and the golf, his planning board duties and his evenings with a glass of wine on the deck, Simonds is enjoying retired life. He’s the skipper of his own ship. “If no one else I’m entertaining myself,” he said.