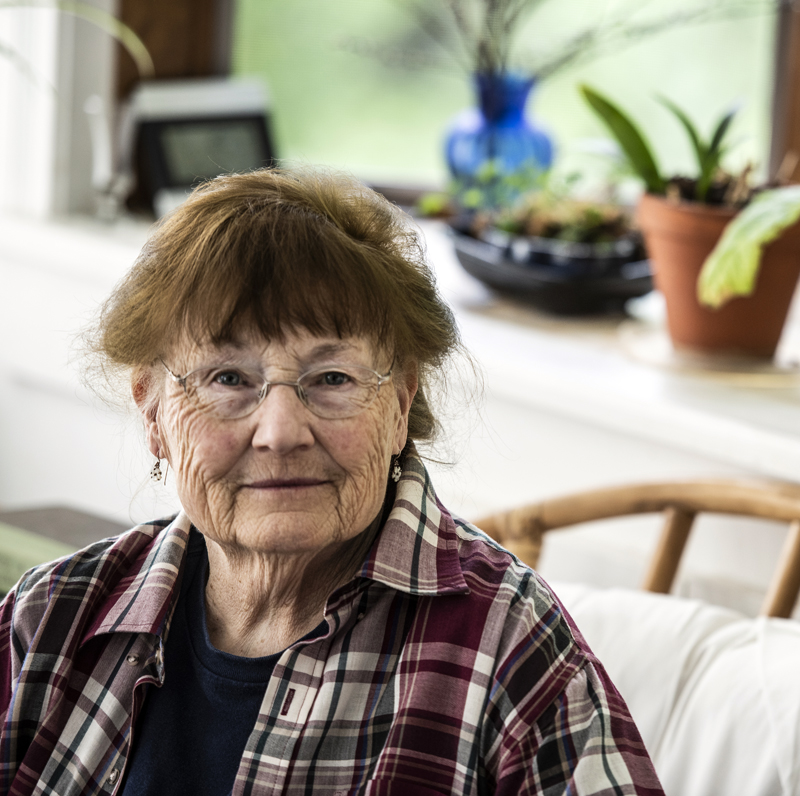 Julie Babb sits in the sunroom at her home in Damariscotta on Tuesday, June 8. Babb is known for the realism and attention to detail she brings to her paintings of birds. (Bisi Cameron Yee photo)

In Lincoln County Julie Babb is known as an artist with a finely honed gift of observation and an earned knowledge of her favorite subject. Her bird paintings, informed by her detailed studies of anatomy and behavior, are elevated by her ability to imbue her canvases with an almost poetic realism. But Babb had a rich artistic life before she ever touched brush to canvas to paint a red-tailed hawk in flight.

Babb was born in New York City, but moved with her mother and stepfather to Mexico City while she was still very young, spending the first 20 years of her life there.

As a child of 5, a precocious Babb horned in on her mother’s guitar lessons. There were always cookies on a plate for the guitar teacher. “I came for the cookies,” she said. But she wound up with a red plastic Gene Autry guitar, and then for her birthday, a real guitar, and eventually a “really good guitar.”

Babb came to Maine in 1962 when her stepfather retired. Her mother, originally from New England, wanted to return to the area. She was a fish out of water at 20 years old.

“Everything was new to me,” Babb said. “I didn’t know a dollar from a peso.”

She got a summer job waitressing at the Ledges Inn in Wiscasset and fell in with a group of young people who would gather to jam and share records of the folk music they admired. Babb had landed in Maine during the American folk music revival, a period where protest songs and roots music gave birth to artists like Bob Dylan and Joan Baez.

Babb played guitar during these sessions and introduced the group, which included a young man from rural Falmouth, to the traditional Mexican music she grew up with. In the fall she enrolled at the University of Maine at Orono.

In October, the young man she had jammed with in Wiscasset, Bruce Babb, came looking for her. They had eight dates and spent many hours “talking, just being friends,” Julie Babb said. “We decided we wanted to keep the conversation going.” They married that Christmas Eve.

Julie Babb dropped out of school and the couple eventually made their way to Rochester, N.Y., where Bruce Babb landed a job as a research chemist with Eastman-Kodak. Julie Babb stayed home and raised the couple’s two daughters.

One evening, as the couple was enjoying an open mic night during an evening out at a Rochester cafe, the announcer called her to the stage. Her husband had given the emcee her name.

“And I went up,” she said. “In those days everybody was singing and playing music. I was a part of it. For the first time I realized that people liked what I did.” 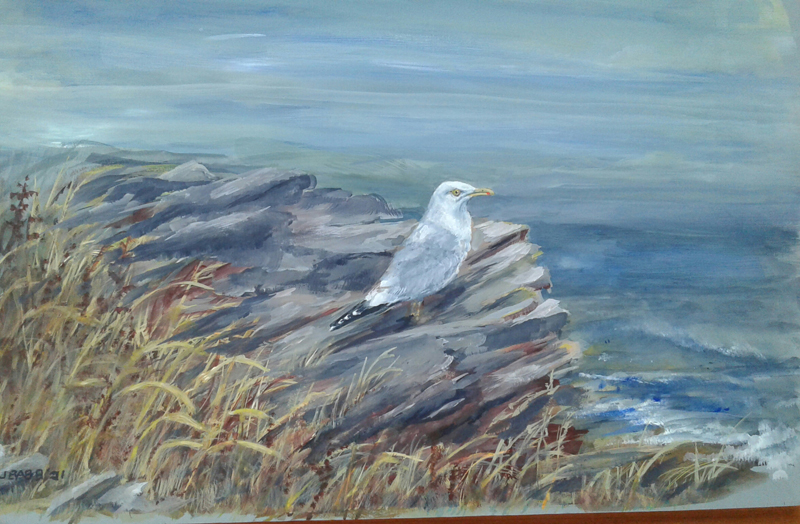 “Johnathan II,” by Julie Babb. The painting replaces one of Babb’s that was lost in the September 9, 2020 fire that destroyed the historic Seagull Shop at Pemaquid Point in Bristol. (Photo courtesy Julie Babb)

By 1965 Julie Babb formed her own band. Julie and Company played a mix of American folk music and originals at weddings, funerals, bars, restaurants, and eventually concerts. They got an offer to cut a record and when they needed a B-side, she wrote an original song, the first of many.

Julie and Company put out one full-length album, “Live on the Other Side of the Tracks,” in 1973. At the peak of their success they performed in Syracuse, N.Y., opening on a smaller stage for the chart-topping group The 5th Dimension.

After seven years she went solo, playing folk songs and the music she wrote herself. Her knowledge of Mexican music garnered her opportunities to play at rallies for labor leader and civil rights activist Cesar Chavez.

By 1976 Julie Babb had met singer and musician Paul Miller and the duo they formed became successful.

“Our voices blended beautifully,” she said. Some of those early performances are still available on YouTube.

“It was my most consuming interest,” Julie Babb said about the role music played during the Rochester years. “But your life moves ahead, and you have to leave some things behind.”

In the meantime, Maine had not been forgotten. The Babbs rented a summer cottage every year and at one point a friend took Julie Babb on a day trip to Pemaquid Point. 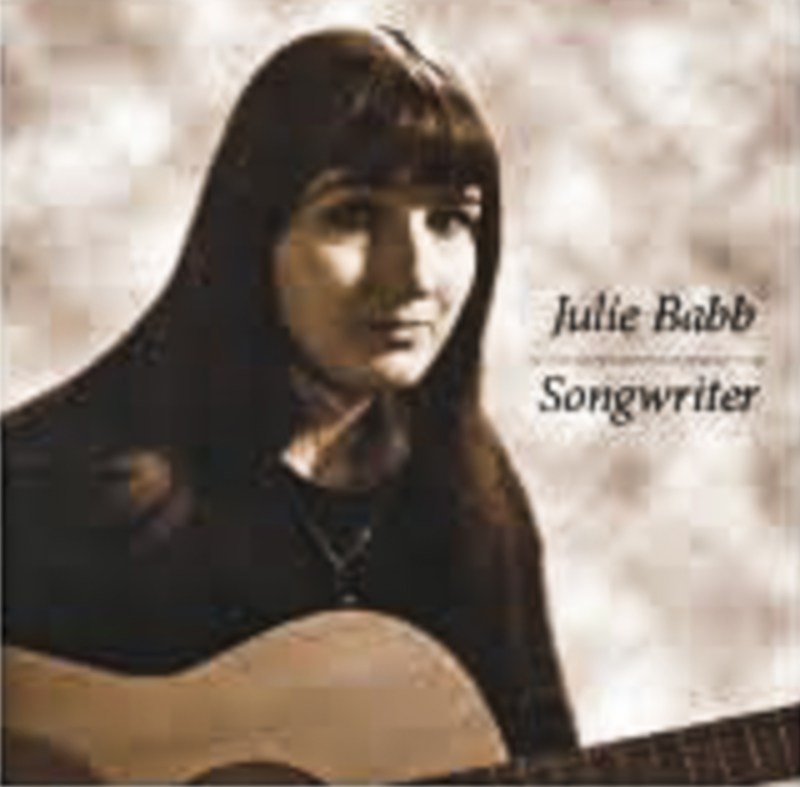 An album cover from Julie Babb’s days as a singer songwriter. Babb said she was influenced by folksingers like Joan Baez and Judy Collins. (Photo courtesy Julie Babb)

“I had never seen anything so wonderful,” she said. She promptly took her husband to the lighthouse and they both immediately decided that was where they wanted to be.

“At that time it was not so crowded,” she said. “There were wonderful flat rocks you could sit on, stretch out on. You could put your head down and listen to the waves, the serenity. It’s a magical place.”

When Bruce Babb retired early in 1992, the Babbs bought a home in Pemaquid and started a new chapter of their lives as artists.

Julie Babb had taken a number of art courses over the years and started out painting the landscapes of Maine. “What else do you do when you live in this beautiful place?” she said.

After a friend asked her to try her hand at painting a red-tailed hawk, Julie Babb turned her talent to capturing songbirds on branches, raptors in flight, sea gulls on wave-swept rocks.

In 1996 she won a scholarship to study ornithology with the Audubon Society, and in 2004 she completed the Cornell Lab of Ornithology’s home study bird biology course.

She became a curator for the Maine Wood Carvers Association and managed the collection of frozen and stuffed birds they used as models. “I kept track of every little feather,” she said. She studied the forms of birds in three dimensions and won awards for her “flat art” during the association’s woodcarving shows.

Julie Babb got special permission to visit the aviary buildings and flight cage at Chewonki in Wiscasset to observe and draw life studies of injured birds, exploring how they moved as they recuperated. Chewonki’s wildlife rehab is not open to the public. She has files full of photos and sketches collected over the years that she uses as resources for her art. She had fallen in love with birds. “They’re all so wonderful, all so different,” Julie Babb said.

She paints the eyes first, “so they’re looking at me,” Julie Babb said. “So I know who I’m talking to.”