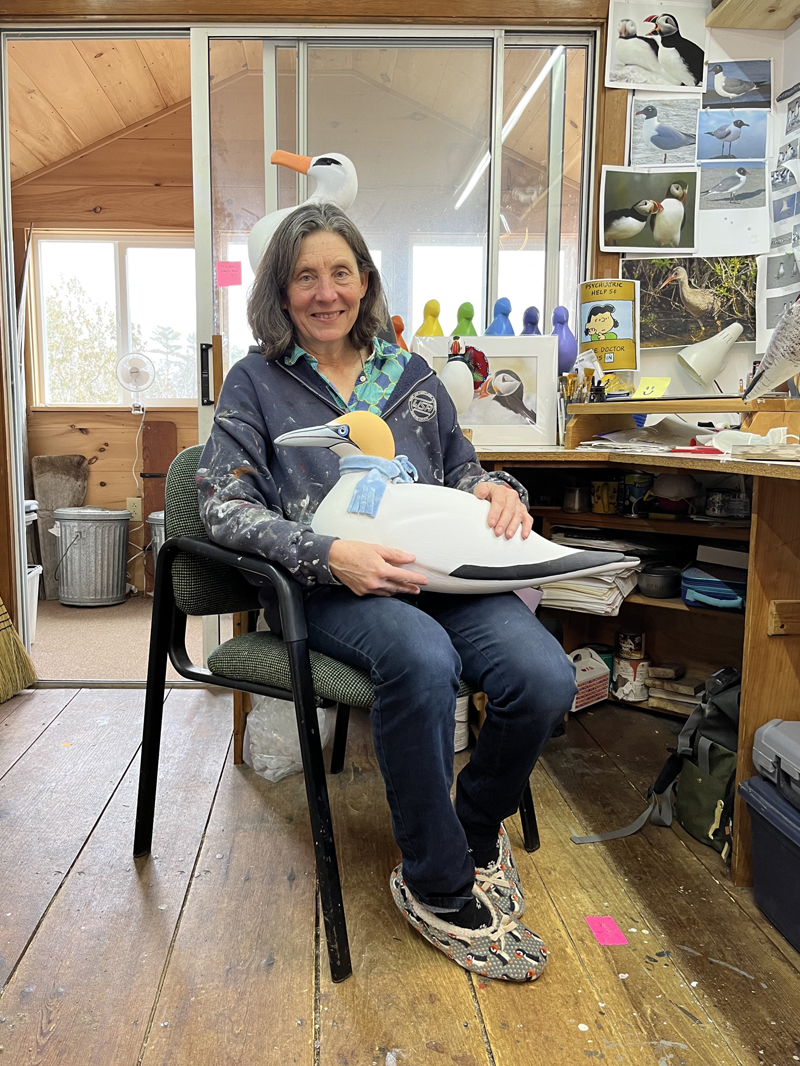 Susan Schubel, better known as “Seabird Sue,” has worked in various roles at the Hog Island Audubon Camp and with Project Puffin since the early 1990s. (Anna M. Drzewiecki photo)

She sat nested among replica birds, rows of plastic eggs arranged on dowels. She wore a paint-splattered sweatshirt, its patterns like the unique markings of an egg. It was oddly quiet for a room full of birds, the walls busy with imagined life: Plastic bodies painted to look like common terns, albatross, other species, tucked in around the paint cans. A row of puffins painted rainbow “for inclusivity,” she said. Photographs and notes pinned to a large cork board, echoing in images the birds around them.

“It probably takes an hour, an hour and a half total. But you’re doing it in different layers of paints,” said Susan “Sue” Schubel, who has a degree in zoology from the University of New Hampshire, studied at Maine College of Art, and has worked at the Hog Island Audubon Camp since the early 1990s.

The studio, at the Hog Island Audubon site, is where she paints decoy birds for researchers here and around the world.

For terns, she paints the eyes last.

“If it’s a new species, it definitely takes me longer because I dwell a lot on the shade of gray that it needs to be. There’s lots of little details. Because sometimes it’s really the tiniest things, as you’re studying the bird, that make a difference,” said Schubel. “Like when I was trying to do the Brown Noddy, they’re kind of hard because they fade gently from their head. But then I realized that this little black mark by their eye, and this little white line, that was so essential.”

Schubel held a decoy bird in her hand, pointing to the various spots that commanded her artistic – and scientific – attention.

Schubel is better known as “Seabird Sue,” the name she traveled under for years to schools along the coast of Maine, educating on marine life, seabirds, and conservation.

She recalled being recognized by a former student who remembered, first and foremost, Schubel’s shoes.

“I wore these sparkly Converse low tops, they reminded me of herring scales,” she said. In her studio, she wore slippers with puffins on them in place of her herring-scaled Converse.

“My dad is an oceanographer. So we have that link to the sea. And my mother was a teacher,” said Schubel, who lived in Maryland and Long Island, N. Y. as a child. “We’re all education and science in my family.”

In 2008, Schubel was honored as a Disney Worldwide Conservation Fund’s Disney Conservation Hero. At the time, an Audubon news release noted that she had presented to more than 10,000 kids in Maine. In a photo of her painting a mural at the Project Puffin Visitor Center – a seal chasing a fish above eel grass – Schubel wears a paint-covered smock. Not dissimilar from the sweatshirt she wore in her studio, painting the eyes and beaks of decoys, lined up like loyal companions.

But before she was “Seabird Sue,” she was just Sue, among the seabirds.

First, she came to Midcoast as an Audubon camper on Hog Island in 1993. Then, she returned as a research assistant.

“But that was just a seasonal gig,” said Schubel. “So I would go off around other places doing other things. And then I would come back in the summers, back to homing on these islands and spend the season out there doing research and protecting the birds.”

Five summers on Eastern Egg Rock, then five more on Matinicus Rock. And little bits of time on all the other islands, somehow, sometime, in between.

She bought land in the area in 1996. After a stint studying birds on the coast of California, Schubel said, “I came back and started building my nest there.”

Behind her, through the studio’s window, the water gleamed. It’s a familiar sight for Schubel, who lived next-door as caretaker for nine years.

“I’ve kind of had many of the jobs,” said Schubel, including work with Project Puffin and the Hog Island camp.

“In the summer, now, I am a sanctuary manager,” she said. “So I am back to the bird islands, which is great.” Along with Sanctuary Manager Paula Shannon, Schubel stocks the seven islands for the research crews, helps them gather data.

Schubel understands the new researchers’ experiences well. As a field researcher, she witnessed and participated in the return of puffins to Eastern Egg Rock, changes in climate and fish populations, through the recent arrival of Laughing Gulls, who have moved up from the Mid-Atlantic.

“All these birds tend to nest in groups … They go to a few places, but a lot of them nest together, which kind of makes sense because if you’re traveling around the whole giant ocean, where are you going to find other birds? So you come back to your island where you have a history usually you hatched there, and you know that there’ll be birds there when you come back,” she said. “These birds are really influenced by their peers.”

“We definitely have a lot more puffins nesting than when I first came,” she said. Schubel arrived on the seabird scene at the end of an era of re-populating Eastern Egg Rock with the puffins who once called it home.

“At the very beginning of the project, there were no other birds really nesting there yet, because it had just, they’d been completely decimated,” said Schubel. “The idea was to put decoys out so that when they came back, they would see their kin, and think, ‘Okay, this is the right place, there are our birds here, it’s safe, there’s food’ … We’re really not only providing the social cues, but communicating with them that this is a safe place that you can prosper.”

At the time, part of the job was also tending chicks. 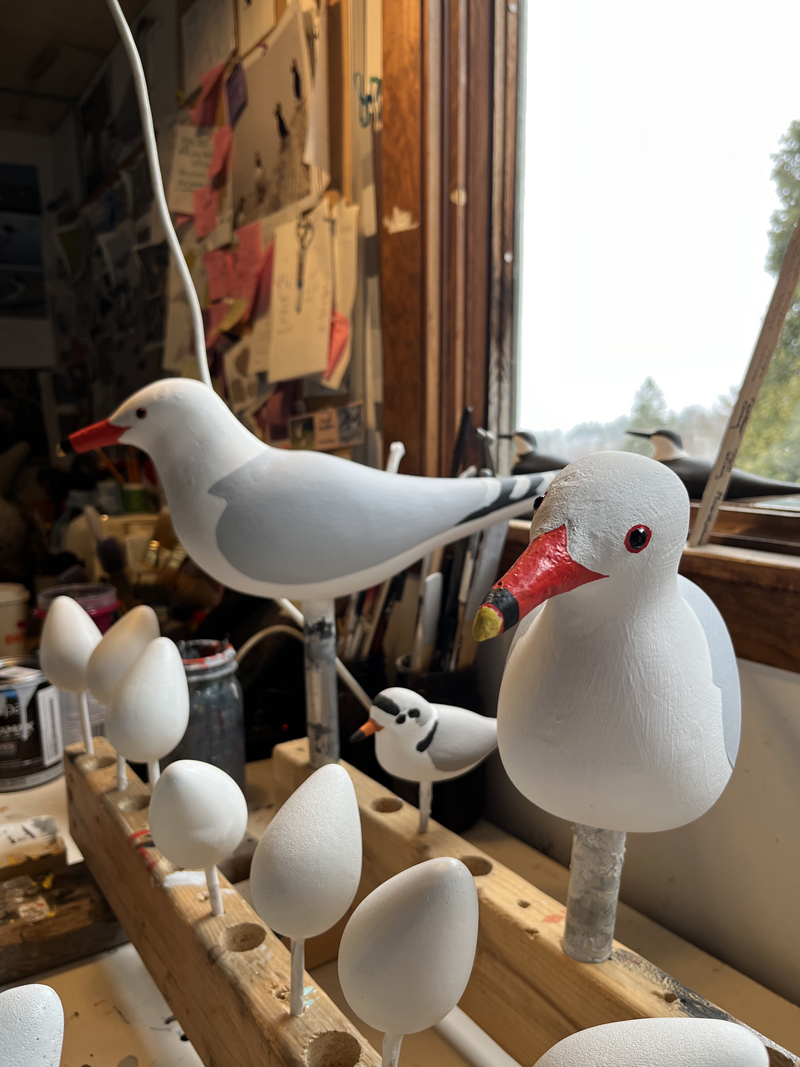 In the studio, decoy gulls dry on their dowels before being carefully packed for shipment across the ocean. (Anna M. Drzewiecki photo)

“We would get up and do a 6 o’clock count in the morning, just perusing the island from the roof of the cabin,” she said. Then, they spent much of the day in the blinds. “We lived up there, for the whole summer. We were doing a lot of observations to see which bands of birds were coming back, where they were nesting and who they were nesting with, to see if there were any birds coming from other places.”

“Once there was a lot of activity, we started studying how they were connected to the environment through diet,” said Schubel.

“We were collecting information about what kind of food was being brought in, we started that first with terns because they nest out on the surface … And we would watch what kind of fish were being carried in,” she said of the still ongoing study. “So this has really changed a lot over time, what they eat, how much they eat, how they’re doing.”

“They’ve had less fish recently. And not the types of fish that are most calorie rich and healthy for them,” added Schubel, citing changes in the Gulf of Maine. Currents, water temperatures.

“It’s very valuable to keep track of that information, because it’s really hard for people to monitor juvenile fish populations, because they’re so small. Seabirds are really excellent samplers of juvenile fish. And they’re just starting to be recognized as researchers in that area,” said Schubel. “They’re going to perhaps use this seabird-gathered data to make fisheries regulations to put it into … an ecological context where you’re keeping track of more than just how much fish can people pull from the ocean, but how much fish do the other inhabitants of the ocean also need?”

Schubel spoke interchanging pronouns with the birds, until “we” and “us” and “you” and “them” are blurred.

“They’re collecting the data,” said Schubel of the seabirds. “And then we can help interpret that information.”

“One of the strong threads in my life is islands,” said Schubel. She did seasonal biology work elsewhere, too, from the American Southwest to the Pacific Islands, where she worked with an avian paleontologist in archaeology field sites. “I got to nurture my Pacific obsession,” she said.

She mentioned Little Jenny Island in Casco Bay, which became a focus site during her time.

“It’s amazing to see such big colonies when before it was quite sparse,” said Schubel. “At the very beginning of that project, I was helping set up the tent platform out there. We had nothing. So that’s exciting to know that now there are thousands of birds nesting there. And endangered roseate terns are nesting there. It’s just, just such an island full of life.”

She conjured the islands, rich with sounds and smells and color, effortlessly. Though for now, the island research sites are dormant. In the winter, Schubel is inside, painting decoys.

They are not birds from dreams, birds from a bestiary. But their lifecycles seem to be.

“A mid-sized tern can be a lot of different species,” said Schubel. She described the reinvention of a decoy from one species into another. Shape-shifting, the bird went through two other species to get to a Willet.

Her birds are travelers, just like they would be if they were flesh and feathers.

“These common terns, they just need their black bill tips. And then they are going off to the UK, to the Farne Islands. They ordered a bunch,” she said. “These are kind of the leftovers. These are our Audouin’s gulls that went to Turkey. And these piping plovers are going to Wisconsin. I just sent a bunch of black terns to Pennsylvania. The cormorants are heading to Australia. Some of those, the big bird there with the yellow bill, that’s a masked booby. We sent a bunch of those to Mauritius.

“The priority is getting all the equipment to people before their birds need it. I have decoys and the sound system I sent out to California and they just installed it yesterday. They sent pictures. And those gulls,” she said, pointing to an array of painted gulls destined for the Mediterranean. “Hopefully they get to Turkey.”

The murre eggs, she said, will probably be more for enjoyment than research, to sell at the Project Puffin store in Rockland.

“Murre eggs – I don’t know if you know – but they come in all different colors. And so they come in a beautiful kind of turquoise blue with individual patterns so out on the cliffs, the birds can recognize their own eggs. And it’s very pointed so that they don’t roll off the cliff. But anyway, I added a musical element, so they’re murre-acas.”

Schubel uses house paint on the decoys, for its durability. Painting, for her, is more like sculpting. She pushes the colors around.

“I was heading towards painting,” she said, of her time at MECA. “Although I think I am actually a sculptor.”

In the room adjacent, a brightly-lit library and conference room, the wide floor boards are painted an intricate texture of grays, like stone. Painting, building, both. Like the decoys.

“May is a big lugging month,” explained Schubel. She will soon be stocking the islands with summer supplies, setting up tents, raising moorings for boats, etc. But first: Black bill tips on the common terns. Eyes. Murre eggs in need of patterns.