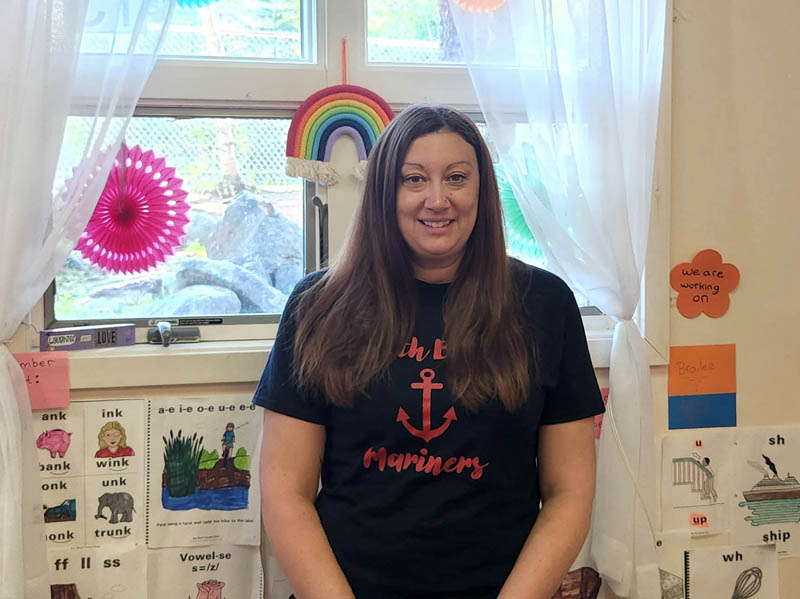 Amanda Sykes is a teacher, parent, and alumnus of the South Bristol School. Sykes was a member of the school’s first ever Discovery Boatbuilding Program class in 1995-96 and just watched her daughter complete the program with a successful launch Thursday, June 16. (Alec Welsh photo)

As members of the South Bristol School and community watched this year’s eighth grade class launch the boats the students built during the school year, Amanda Sykes was able to take in the scene from a unique perspective.

This year Sykes, a South Bristol resident, school parent, and current SBS special education teacher, was able to watch her daughter participate in the year-end ritual Sykes herself helped establish back in 1996.

As an eighth grader, Sykes participated in the first year of the school’s now long standing collaborations with the Maine Maritime Museum, the Discovery Boatbuilding Program.

Almost every Friday during every school year since 1995, members of the school’s eighth grade are bused to the museum in Bath to work with volunteers learning how to use hand tools, apply math, solve problems and build boats.

“I love that this program is still around,” Sykes said. “It is much more hands-on now than it was in the past. They did not let us use hand tools like (the) saws they let students use now.”

Sykes went on to graduate from Lincoln Academy in 2000 and then attended the University of Maine in Orono for two years, planning on a career in public relations. Although her mother Amy worked in education, Sykes didn’t expect a teaching career for herself.

“I wanted to try something else and see what was out there,” Sykes said.

After doing some job shadowing at a hospital, Sykes began to have second thoughts about her initial career choice. “You deal with the public and bad and good publicity,” Sykes said. “I didn’t feel like this was what I was meant to do, or if I was really making a difference.”

Taking a break from college, Sykes moved to Florida between 2002-2004 working as a waitress and bank teller. “Not being in school and working in the service industry and at the bank, you get a feel of what you can do without a college degree,” Sykes said.

Sykes felt called to the education profession even while attending college for public relations, but she recalled an internal struggle over her eventual career choice.

“I had substituted long term here at South Bristol and at Great Salt Bay, mostly throughout the district,” Sykes said.  “I really liked it but thought I should be trying other things.”

Sykes started substituting in the special education program and fell in love working with the students. She had no fears despite the challenges that can arise in the program and the limited training offered to a substitute teacher.

In 2006, Sykes returned to University of Maine, graduating with a B.S. in elementary education in 2009 before starting her career as a full time teacher at GSB in Damariscotta.

More than a college education is required when working in special education, she said. Additional training is necessary to help students with emotional and learning disabilities.

“The program is called safety care,” Sykes said. “They teach you de-escalation strategies.”

These programs help special education teachers identify when an individual is showing signs of emotional discomfort.

“There are replacement behaviors where you notice a trigger in someone and try to give a replacement behavior like asking them to come on an important errand with you,” Sykes said. “Another strategy is the wait strategy, where if you push them or try to get them to do something they just might blow.”

Sykes said that getting to know the students personally makes it easier to identify triggers and which de-escalation technique works.

Sykes would run the special education program at GSB for five years before returning to SBS where she has taught for the last nine years.

While her daughter, Avalee, has graduated from SBS, Sykes’ daughters, triplets Chloe, Camden, and Ainsley Merrill, are starting kindergarten at SBS in the fall.

“They had just finished pre-K and we had gotten them use to not running to me every time something happens,” Sykes said.

After working in the education for the last 14 years, Sykes stays in touch with some of her former students or their parent, and hearing about how far they have come.

As a Boston Red Sox fan, Sykes enjoys seeing a game at Fenway Park at least once a year. But in 2021 she was able to make the game special for four students graduating from the eighth grade at SBS.

“Usually the students go on a trip to Washington D.C. but last year their trip got canceled because of the pandemic,” Sykes said. “So I took them to a Red Sox game.”

In true small town spirit Sykes called the parents of the four eighth graders to get their permission.

“All of them were crazy about baseball and have never been to a Red Sox game,” she said.

With her partner Shane Merrill, and Avalee Sykes, and the four graduating eighth graders stayed the night in Boston.

The students enjoyed hot dogs while watching the Red Sox defeat the Tampa Bay Rays at Fenway Park. After the game they stayed at The Verb Hotel across the street from the ball park.

“Some of these kids still play baseball today at Lincoln Academy,” Sykes said. “They just recently invited me to a game and I went.”

Experiencing fear and mystery lures Sykes to her love of reading. Her favorite author is Stephen King.

“I like to be scared,” Sykes said. “I also love crime mysteries and trying to solve the story before you get to the end.”

Sykes’ family has lived in South Bristol since the 1970 when her grandparents moved to the area. She recently bought the house her father built and raised her in. She intends to raise her family there. Currently most of her family lives on the same road, including her mother and father, three of her uncles and a cousin.

“They call it the Lincoln Compound because my mom’s maiden name is Lincoln,” Sykes said.

Once a summer her family enjoys a large lobster bake cookout at one of her uncle’s property. “They cut an oil drum in half and stuff it full of lobster, oysters, clams,” Sykes said. “We just had it because of Avalee’s graduation.”