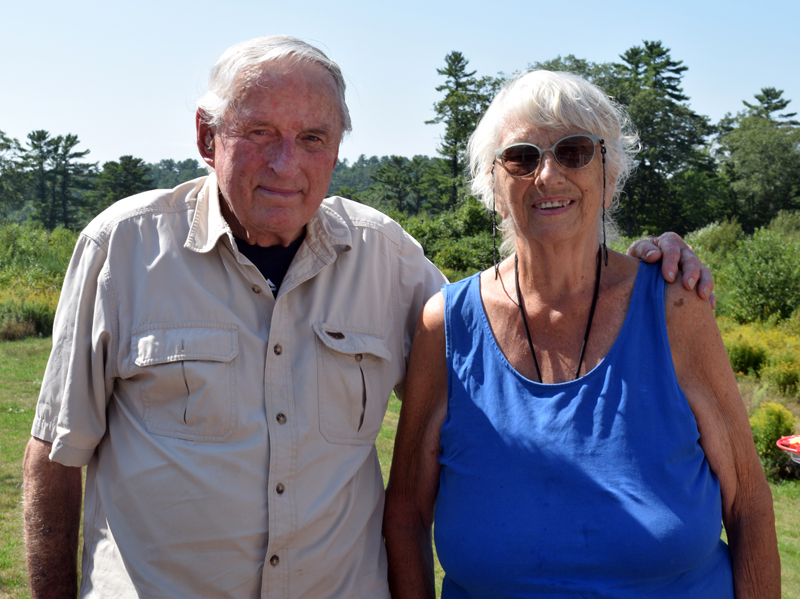 Weston and Sylvia Keene stand outside their Nobleboro homestead on Tuesday, Aug. 30. Good neighbors, the abundance and variety of nature, and the deep history and sense of place kept the Keenes attached to Nobleboro, Sylvia said. (Evan Houk photo)

Sylvia Keene considers herself an “endangered species” who was born and raised in the same house in Union and never had any desire to live anywhere else but Maine.

When her and her new husband at the time, Weston Keene, found a 20-acre farm in Nobleboro to purchase in 1957, the couple found a place to call home and never wanted to leave.

Good neighbors, the abundance and variety of nature, and the deep history and sense of place kept the Keenes attached to their homestead and its town, Sylvia said during an interview with her and Weston at their Center Street abode on Tuesday, Aug. 30.

“They’ve been such good people. We have good neighbors,” Sylvia said.

Weston used his father’s word, “cussedness,” to describe the grit and determination he has seen in individual Mainers who scratch and survive while remaining true to themselves. He defined the word as referring to someone who does not take no for an answer.

“It means ‘damn the torpedoes, full speed ahead,’” Weston said.

The Keenes, for their part, have also served as friendly and helpful neighbors, living along the road that previously served as Route 1 and is now Center Street in Nobleboro. They took in stranded motorists or travelers over the years, giving them a place to rest and regroup on the side of the road.

Weston mentioned a crocheted wall hanging that came with the house and still hangs inside the front door. The sign references a line from Sam Walter Foss’ poem “The House by the Side of the Road,” that reads “Let me live in a house by the side of the road/And be a friend to man.”

“People that had things happen, they’d wind up here,” Sylvia said. “We wanted to be here for people.”

In the 1960s, Sylvia said the whole area was lined with camps for kids who were sent by their parents to escape the sweltering concrete jungle of the cities in the summer.

Both Sylvia and Weston became involved in 4-H clubs, taking kids camping and swimming in Pemaquid Pond. Sylvia even petitioned the Nobleboro Select Board to purchase land to create a public swimming spot for kids in the area, which eventually became the swimming hole near the ice house in Damariscotta Mills.

“We’ve always been involved with the young people in our community,” Sylvia said.

The Keenes also fondly remember hosting musical gatherings at their house for their children and their friends.

“We used to have potluck suppers and have people spread all over the living room playing,” Sylvia said with a smile.

The two were also involved in the Nobleboro Civic Club, which held beano nights every Friday to raise money for the Nobleboro Central School, one of the first consolidated schools in the area. Prior to this, it was mostly a smattering of one-room schoolhouses that children attended, Sylvia said.

Weston and Sylvia Keene met as freshmen at the University of Maine in Orono after a blind date and became instantly attached.

The two had much in common, including a love of music and a musical strain in each of their families, Weston said.

Sylvia plays piano and led the choir for a time at the couple’s lifelong church, the First Baptist Church of Nobleboro. Weston would play rhythm guitar and lead children in song at church.

On the farm, Weston and Sylvia grew different kinds of produce, like snap peas that the kids would eat right off the vine when attempting to harvest.

“We soon learned that you grow things you want to eat,” Weston said with a laugh. “That wasn’t hard to figure out.”

Weston served in the U.S. Army during the Korean War until 1954 and married Sylvia in 1955. He went back to school at the University of Maine at Farmington and worked as a teacher at many of the small schools in the area in the 1960s.

“That’s what the teachers did at that time. They didn’t stay any one place very long,” Weston said.

Sylvia attempted to work with the agricultural extension service through the University of Maine in Orono in 1955, but said she was not permitted at the time because she was married. She put her Bachelor of Science degree in home economics to good use in raising her children and running the household until her kids entered school.

“She was a great mother,” Weston said of his wife.

Sylvia then worked in the kitchen at Nobleboro Central School with Delores York, who was beloved by the students for her yeast rolls.

“She put a lot of love into her food,” Sylvia said.

Weston and Sylvia, at ages 90 and 88, respectively, continue to stay lively and active, mostly by traveling to Round Pond every Monday night for the informal jam sessions near King Ro Market.

The Keenes have seen many changes over the years, including the relocation of Route 1 and a transition away from home delivery of milk and groceries and fish and clam peddlers coming to the door. They still feel as if Nobleboro is the same special place it was when they first moved there 65 years ago.

“I said ‘The town will come to me fast enough,’ and it has,” Sylvia said.