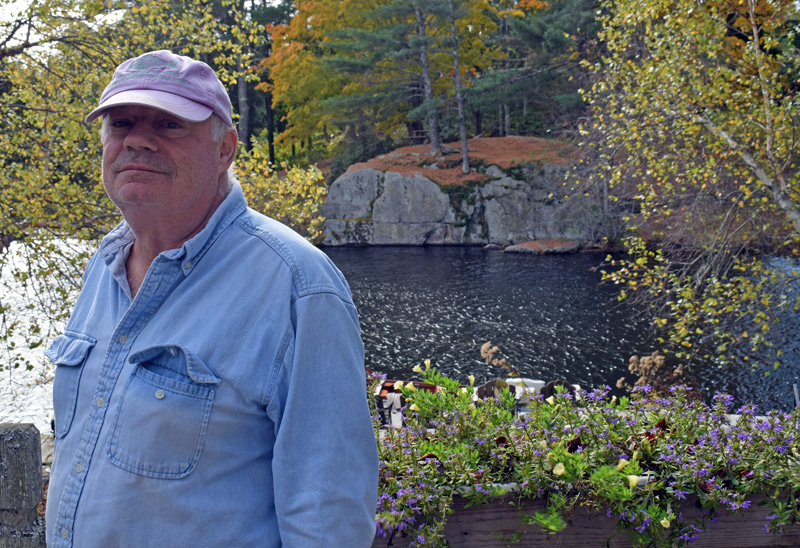 Bobby Whear, co-owner of the Mill Pond Inn, stands on the back deck of the bed-and-breakfast in front of the rock he said he always dreamed of shooting hockey pucks against. Unfortunately, the flowing water never froze. (Evan Houk photo)

Bobby Whear, the owner of the Mill Pond Inn in Damariscotta Mills in Nobleboro, seems to have his hand in nearly everything in Lincoln County and helped facilitate some major developments in the community.

He was president of the Damariscotta Region Chamber of Commerce, helped start the Lincoln County Recovery Collaborative, helped develop King Eider’s Pub and Clark’s Cove Farm, continues to serve on the Great Salt Bay Sanitary District, and is one of the stars of “Wuzzup News,” on Lincoln County Television.

During an interview at the Mill Pond Inn on Tuesday, Oct. 19, Whear said he just likes to keep busy.

Whear grew up in Marblehead, Mass. He was working as a chef in Cape Ann in May 1986 when he and his then-girlfriend decided to take a trip to Surry, Maine, to see what the guide books referred to as “the best sunset.”

“Me and my girlfriend at the time used to read all these inn books, when inn books were in,” Whear said.

On the way, they visited Pemaquid Point and on the way back, missed the turn-off for Route 1, instead driving on Academy Hill.

At the time, traffic through Damariscotta Mills was still two-way and the couple stopped right on the bridge in the Mills where kids like to jump into the water in the summertime.

“We stopped on the bridge and I looked at my girlfriend and I said, ‘This has got to be one of the most beautiful places I’ve ever seen,’” Whear said.

They sat on the bridge for 15 minutes before a car came up behind them and they had to move. The next house on the right had a “for sale” sign.

They looked at the place and walked on the back deck, which Whear said was falling off the house. 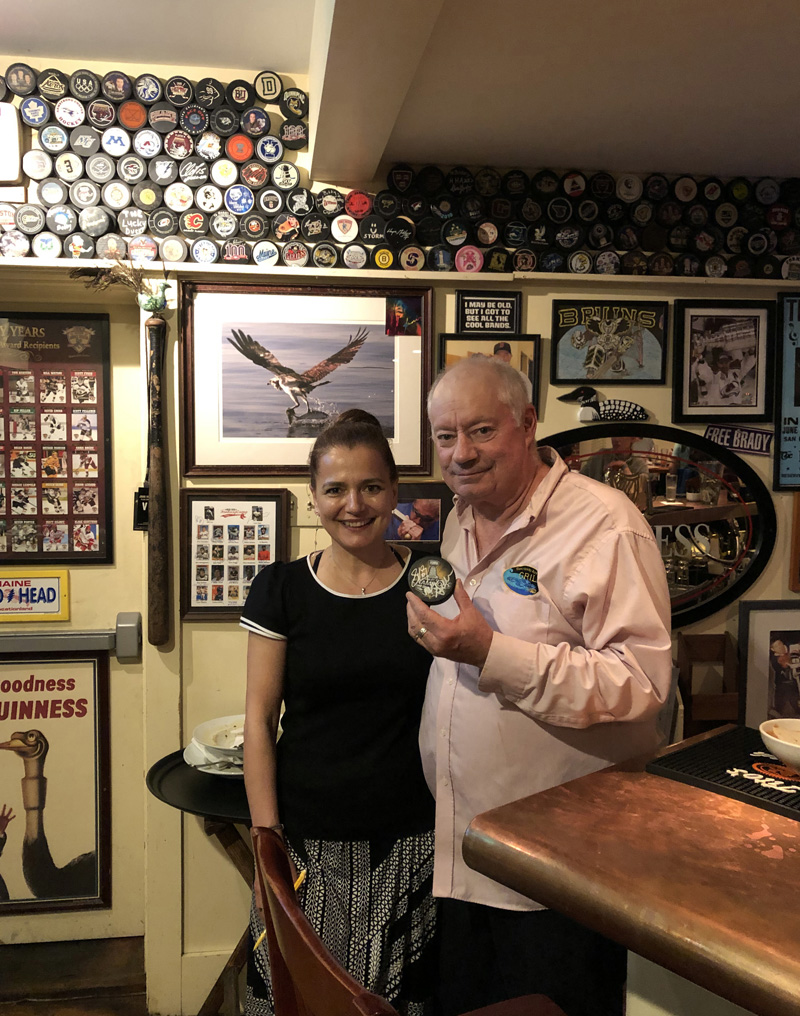 Bobby Whear stands with Tamara Dica, co-owner of the Damariscotta River Grill, holding a recently acquired hockey puck signed by Pittsburgh Penguins player Sidney Crosby in June 2019. Whear tends bar one or two nights a week at the grill, where he is extremely proud of his hockey puck collection, which consists of over 300 pucks from around the world. (Evan Houk photo, LCN file)

“How could anybody sell a place like this?” Whear said to his girlfriend.

The two eventually made it to the Surry Inn to watch the sunset, where Whear said he tucked $20 into the shirt of the innkeeper and told him, “I want you to make the most romantic dinner you’ve ever made in your life.”

He then made a toast and told his girlfriend they were going to buy the house in Damariscotta Mills, which they turned into the Mill Pond Inn.

“Originally, when I saw it, all I could think about was shooting pucks against the rock across the pond,” Whear said. “But, 36 years later, it’s never frozen.”

The couple eventually turned the two-apartment house into a five-room bed and breakfast to make it more profitable and create what Whear calls a “cult” consisting of people from all over the world.

“We’ve created a cult. People who have met here are now lifelong friends. They meet here, somebody from Texas will meet somebody from Southern California,” Whear said.

“It’s still the deal of the area. It’s hard for us to raise our rates because we’re 80% repeat,” Whear said.

Whear started working at Backstreet Landing, a bar that previously stood where the Skidompha Secondhand Book Shop is now.

“Today, I’ve tended bar at every liquor license in Lincoln County at this point,” Whear said.

Whear continues to tend bar once or twice a week at the Damariscotta River Grill, where he is extremely proud of his hockey puck collection on display consisting of over 300 hockey pucks from around the world.

After sending 12 real estate referrals to Schooner Realty, someone suggested to Whear that he should get his real estate license, which he soon did.

To draw business and raise awareness about the Mill Pond Inn, Whear started throwing large parties in his backyard. At one of these parties, he asked oyster farmer Dick Clime, owner of Dodge Cove Marine Farms, to provide 2,500 oysters for a party.

The future owners and founders of King Eider’s Pub in Damariscotta, Larry and Sherry Schneider were at the party.

Whear said he convinced the Schneiders that Damariscotta needed a pub and it needed to serve Damariscotta River oysters, which up until that point had never been served to the public. Whear helped them secure ownership of the building and renovate and develop the pub.

He also helped Tim Cheney discover Clark’s Cove Farm in Walpole and helped him set up what Whear calls the “one of the most desirable wedding venues in Lincoln County.”

“It was finding the right properties for certain people (that) was satisfying,” Whear said of why he stayed in the real estate business.

One of Whear’s proudest accomplishments is the founding of the Lincoln County Recovery Collaborative in 2016 after a lunch with former State Rep. Chris Johnson, which provides resources and help for those struggling with substance use disorder.

“I got all the chiefs of police together, I got the hospital people together, I had doctors come in to teach people how to administer Narcan, and that all started from a lunch that Chris and I had,” Whear said. “It basically got people to take their head out of the sand, that’s what people tell me.”

In 2008, Whear started serving on the Great Salt Bay Sanitary District Board of Trustees, where he continues to represent Damariscotta Mills.

“They needed somebody,” Whear said.

In 2009, Art Mayers asked Whear to take over for the late Sam Pennington on his news show on Lincoln County Television, “Art’s Grab Bag.”

They changed the name to “Wuzzup News,” where Whear has had three different co-hosts since starting on the show.

Currently, he hosts the show with Larry Sidelinger, where the two discuss the latest edition of The Lincoln County News.

Whear even penned a few columns for the LCN in his time, “Fishing Lines” and “Innsanity.”

Whear said that since that first trip to Damariscotta Mills in 1986, he felt drawn to the place and has been “all in” ever since.

(Correction: An eaarlier version of this article online and on page 1 of the Oct. 21 edition failed to report that Bobby Whear helped start the Lincoln County Recovery Collaborative after a lunch with former State Rep. Chris Johnson, of Somerville. The Lincoln County News regrets the error.)