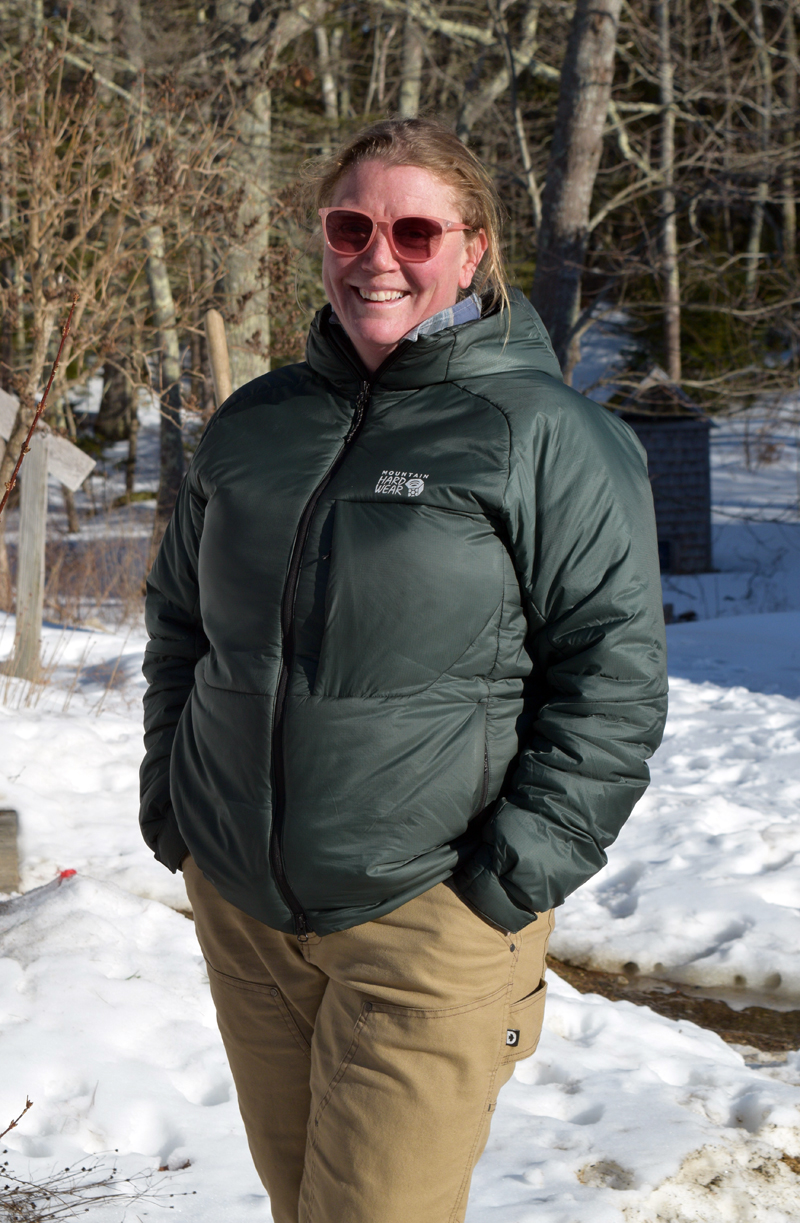 Alicia Witham joined the Carpenter’s Boat Shop on the Pemaquid Peninsula as its executive director in May 2021. (Nate Poole photo)

Alicia Witham, The Carpenter’s Boat Shop’s executive director, journeyed far and wide before she found herself on the Pemaquid Peninsula.

Before joining the boat shop, Witham was the director of adult programs and charters at Sail Maine, a community sailing program based on the Portland waterfront. While she enjoyed her two years with the program, Witham felt like she was capable of doing more.

When her partner and fellow sailor, Annie Fagan, proposed that Witham apply for the executive director position at The Carpenter’s Boat Shop, she saw an opportunity to pull from all of her prior experiences in outdoor education, recreation, and business management, and tossed her hat in the ring.

“I think I found The Carpenter’s Boat Shop and they found me at the right time. Ten years ago, I wouldn’t have been ready for this,” she said.

Located less than a mile up Old County Road from Route 130, The Carpenter’s Boat Shop is a nonprofit founded by Bobby and Ruth Ives in 1979 that offers apprentices, at no financial expense, the chance to spend several months at the organization’s campus and learn to build wooden boats, serve the community, and ultimately determine how they would like to plot the course of their lives.

While Witham admits she could never stomach boat building as a career, she has some experience building and repairing sea vessels, having attended The Landing School in Arundel in 1999.

“When I got there, I immediately was like, ‘I do not want to be a boat builder.’ You spend all day sanding and you’re wearing a Tyvek suit and a respirator and I was, ‘Nope’,” she said, laughing.

However, the skills and confidence that Witham gained at The Landing School proved invaluable in her career as a sailor.

For some, sailing may conjure images of white button-ups, pink visors, and wine bottles. While Witham is in no way opposed to luxury, the expedition sailing that she specializes in is quite a bit more rugged.

While she grew up close to the coast in Portland, she cut her teeth as a seafarer at the National Outdoor Leadership School in Baja, where she spent three months developing her skills in outdoor leadership and expedition sailing, which describes adventures at sea between 5 and 50 days. From that point onward, there was no going back for Witham.

“Sailing, I think, is great because you’re learning on and through the sea and there’s something really beautiful about that,” she said. “The ocean is going to sometimes be very nice to you and sometimes not be so kind.”

Witham discovered a passion for community living and learning in her youth when she attended the Chewonki School and spent a semester living in cabins with 30 other students as they learned about the ecology of the Maine coast.

Witham came back to Maine in 1996 and started working for the Hurricane Island Outward Bound School, a non-profit educational organization and expedition school. She started at the school as a cook on Hurricane Island before she worked her way up the ladder as a course director and then a program director until 2008.

In 2009, Witham moved to San Francisco “with three bags and a skateboard” and started to teach sailing on the west coast at the for-profit Olympic Circle Sailing Club. Just like her time with Outward Bound, Witham worked her way up in the decade that she spent there from an instructor to the general manager.

“It was kind of like going to business school, but not having to pay for it,” she said.

From there, Witham took different jobs in the Pacific Northwest to Florida, but after such an extended period away from her family, she decided she missed home and found a position at Sail Maine.

“I think being there made me realize how much I missed Maine… I kind of took the long way home,” she said.

Despite her breadth of experience, Witham was always second-in-command in her leadership roles, before taking on her role as executive director in May. She said that the level of responsibility that has come with the position has been something she has had to get used to.

“I feel the weight and the importance of wanting desperately for this place to be financially successful because the financial success means we get to have mission success,” she said.

One of Witham’s overarching goals for the boat shop is to provide opportunities for as many different kinds of people as possible. Towards this end, the shop has a “robust” summer schedule of workshops and events and is offering paid weekend classes in skills like coastal navigation.

“What I want is for folks to be connected to this organization, regardless of who is at the helm,” she said.

Witham would also like to encourage more locals to take part in the boat shop apprenticeship experience. Locals could be part of the close-knit apprentice community, partaking in all of their activities and skill-building sessions from breakfast to dinner, but they would also be able to sleep in their own bed at the end of the day.

“I really want people to hear that message in this county and say, ‘Wow, what a great opportunity!’ Because it’s free, you could come and learn how to build boats and go home at night, and it’s no cost to you,” she said.

Much of Witham’s time since her arrival has been dedicated to getting to know the apprentices, marketing programs, and planning new initiatives, but that doesn’t mean her passion for sailing has waned in the least.

The boat shop has a fleet of vessels that the organization keeps in Round Pond between April and October, and Witham has been delighted to put them through their paces.

Despite such imposing obstacles, there is little doubt that Witham will persevere and plot a course towards a bright future for The Carpenter’s Boat Shop.