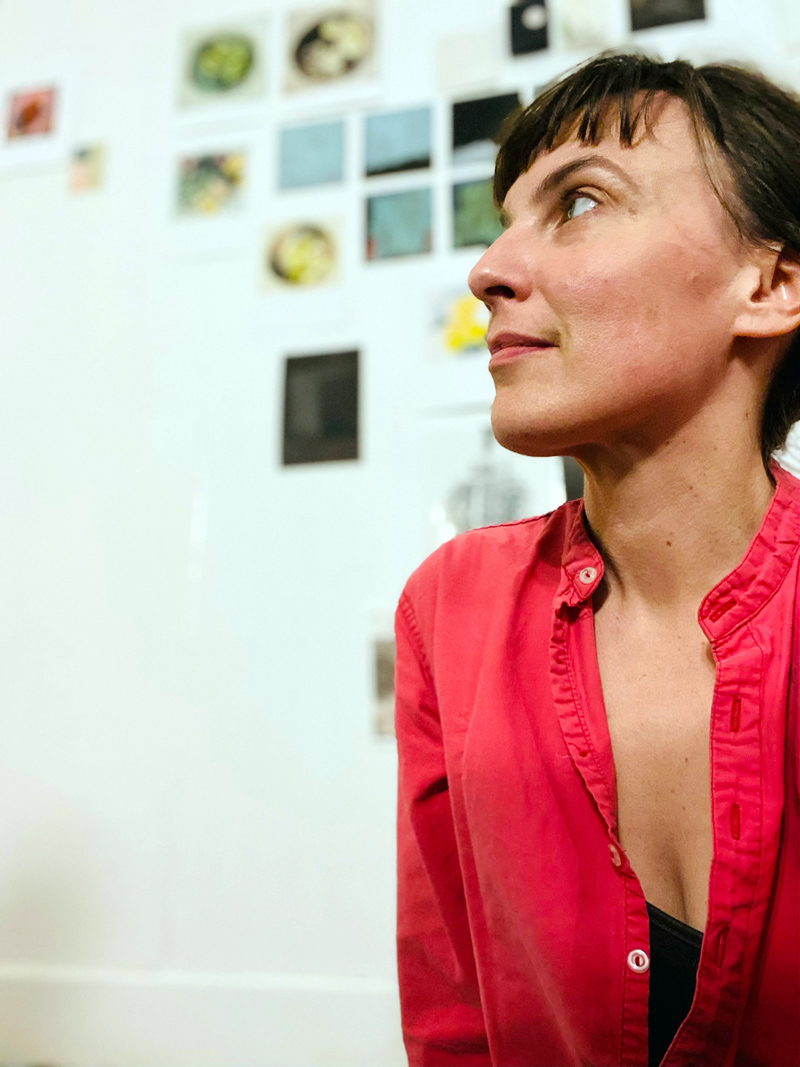 Fletcher Boote is an artist, sound healer, and the visual arts teacher at the Center for Teaching and Learning. (Photo courtesy Fletcher Boote)

“I get really inspired by the kindergarten paintings,” said artist, healer, and teacher Fletcher Boote from her at-home studio in Alna. “They’re so free. They’re so unencumbered by judgment.”

“That’s what makes a great artist,” she continued, “To be able to dive into that space when you’re making so that you’re really making, so you’re like a channel, able to just connect with spirit or some kind of higher aspect of oneself. And that small-self voice isn’t belittling what you’re doing.”

Boote, who moved to Alna in 2014 for a teaching position at the Juniper Hill School, now teaches visual arts for grades K-8 at the Center for Teaching and Learning (CTL) in Edgecomb.

“I’ve just always felt comfortable in that position, like I had something to offer,” she said of being a teacher. Boote is also a yoga instructor, sound healer, meditation leader, and has taught art to children and adults for over 20 years.

“The idea is that the art room is a studio for everyone who uses it,” she said. Generative, not prescriptive.

The model and Boote’s practice has fit well at CTL, where the self-guided “workshop” style classes focus on teaching a skill or technique and allowing students to utilize it for work that interests them. Teachers create their own curricula at the school, which “honors each person’s expertise,” in Boote’s eye.

During Black History Month, to honor the tradition of African American quilt-making and women’s roles in the anti-slavery movement, Boote facilitated students’ creating their own quilts out of paper. One stood out to her: Dark shapes, “totally abstract expressionist kind of composition,” with a short, instructive caption.

Boote splayed her hands out, away from her head, a.k.a: Mind blown.

“I just want to honor that. That kind of freedom and creativity … I really don’t ever want to restrict something like that. I mean, that kind of thinking is like, that’s where we need to go – as humanity, as a group of people. We need to encourage that.”

In her book, there’s still value to learning different skills or kinds of vocabularies. Vocabularies of color, mark-making, sound, etc.

“But the thing that’s been the most important for me, in my own life is – in terms of learning – is actually just the discipline of practice.”

Boote’s own cross-disciplinary practice is intentional and intuitive. A series of small paintings hung on the wall in her sunlit studio. “They come from my meditations,” she said.

“And when I’m standing here at my table, painting, I have to be that supportive teacher for myself,” she said.

A canvas sat on her desk, the same size as those hung on the wall like scales.

“That is another theme of every single thing that I do – it’s as an offering,” said Boote. “If it turns into something else, it doesn’t really function. It’s not as alive.”

Boote had taken a hiatus from painting and started working with other media – sound, installation, ephemeral performance, projection – which she studied while earning her master of fine art at the Chelsea College in London.

“I wanted to work ephemerally, I wanted to use my voice,” she said. Painting had become stressful, about producing. There came a point when she didn’t want “to put any more stuff into the world,” she said.

This was largely inspired by an encounter in her early 20s.

“I found this dragonfly on the road, I was in Italy, and it was dying,” she said. “It was basically on its way out. And I picked it up. And I started studying it. And it was so complex, it was so incredibly beautiful. The wings of this insect – I’m sure probably, most other insects have this aspect to them, but – the dragonfly has all these panes, like almost like window panes right on its wing. Well, each of those panes is at a slightly different angle. And I mean, I just thought: ‘My God, how did this thing get created?’”

The study was intimate, close. Boote repeated drawings of the creature, like she has done since with other subjects or ideas in performance. It was coincidence that dragonflies symbolize transformation, a critical mode in Boote’s work.

“Life always works that way, right?” said Boote. “You just, you have to see the signs.”

The relationship to the creature – and others – brought Boote closer to an internal space and voice.

“I started recording insects, and using those sounds in performances and in videos,” she said. “And then I started trying to emulate some of those sounds, to make those sounds, with this sort of call and response.”

She described recording sound performances with windows thrust open. Animals seemed drawn to it. Sometimes they even talked back: Birds, insects, nearby cows when she was teaching classes out of a barn in Vermont.

Sound and voice have always been central to her practice. Boote once toured as a vocalist in a band. She travelled through Europe, the U.K., Canada.

Boote uses sound in her healing practice, too. She offers sound baths for groups and individuals. Her practice has led to collaborations and teaching at places like education nonprofit Seguinland in Georgetown and as part of Susan Bickford’s performance project “(stillness)” for the past five years.

“With performances and sound baths – my intention is that some sort of transformation happens,” she said.

“From the beginning, it was really the sound that drew me to yoga,” she said. Yoga and meditation practice have since become gravitational to her orbit. There are crystal bowls and tuning forks, altars, around her home.

Now, Boote investigates and collaborates with “vibration as both a physical and an ephemeral kind of material.”

“And often, if I am making visual work, that visual work serves as like a score for a sound piece or for a performance,” she said.

“You create the space, you make the offering,” said Boote. Place – like space – has also informed Boote’s practice.

She is drawn to the water and diversity of landscape in Alna, a sense of time in tides and in architecture. There’s the river, the forests, the farmland, the old structures. “That feels really important to me: Living in a place where history is still right there,” she said.

Being here has also sharpened her sense of connection to environment and resources – a topic of concern since she first started studying yoga and meditation.

Ideas of consumption, waste, ecology, cycles have since surfaced in her artistic work and healing practice. Boote pays close attention to the environment, as its student.

“I have basically always lived in (cities),” said Boote, who was born in New York City. Her children have been teaching her what they’re learning about the environment since moving to Maine. “I didn’t grow up knowing how to identify trees or plants, or anything. I grew up, making, like witch’s brews and pouring them down the crack in the middle of the alley and watching it go into the sewer drain… So I didn’t have a really deep relationship to nature, I didn’t grow up that way at all.”

Boote’s latest project – which so far incorporates photography, painting, and text – investigates that relationship, and deeply.

“When we were holed up at home, I just started taking pictures of my compost,” said Boote.

Boote recalled a revelation she experienced during a quotidian task: Depositing food scraps in a heap in the backyard. She saw the compost, finally, for what it was. Visceral, visual. She smelled it, she wanted to turn away, to pinch her nose. There was the kids’ stale cereal and the rotten avocado. The things they couldn’t or wouldn’t or didn’t eat. The peels and cut ends and refuse. All rotting.

“I had this a-ha moment where I’m like carrying this bowl of compost out to the pile and I was holding my nose, like I can’t look at that, I can’t, I don’t want to face that. And then I dumped it out, and I thought, wait a second. Now it’s out here for everybody to see.” Some relief in such exposure.

“What if it’s like this,” Boote gestured her hands forward from her chest, unfurling her palms, “instead of like this?” she threw her hands over her shoulder without looking.

“Sharing the things that we feel shameful about, sharing what we would rather not have anyone know about us or see, because for some reason there’s judgment around it, there’s shame around it,” said Boote. “It is profoundly healing to be seen and loved – even if the relationship didn’t work out, or you’re wasteful, or you made a mistake, or you feel depressed.”

The project was also inspired by feminist and ecological philosopher Donna Haraway’s book “Staying with the Trouble.”

Boote posts photos of the project on Instagram and has been painting the scenes of decay. She described her relationship to the compost as “something very alive.”

Through repetition and mutation, the photos take on something new. In the project, Boote finds visual and spiritual meaning, acknowledgement of beauty and reckoning with pain.

“We have to let go in order to heal,” she said. “The larger idea of the project – and that is with all my work – is just healing.”