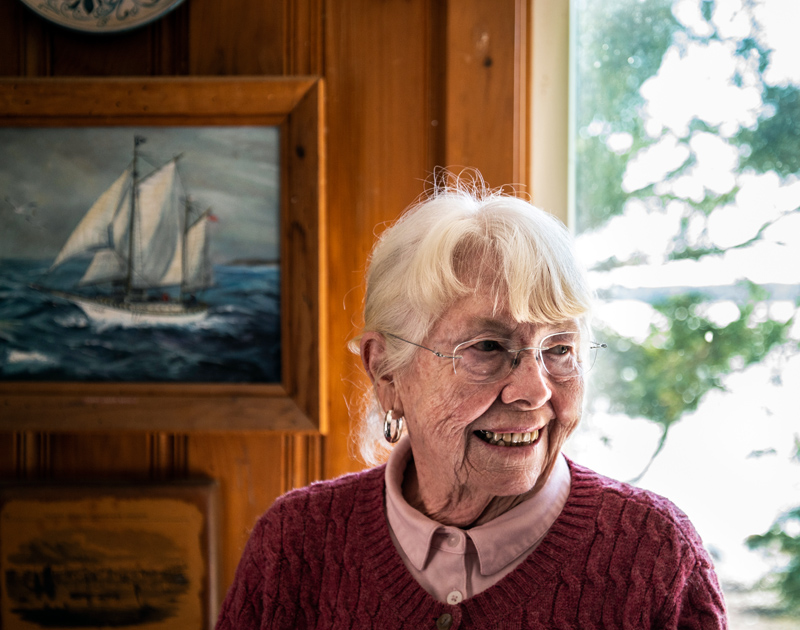 Sally Woolf-Wade stands in front of a maritime painting at her home in New Harbor on Monday, April 27. Woolf-Wade once sailed across the Atlantic on the four-masted Star Clipper. (Bisi Cameron Yee photo)

There’s a small cottage on John’s Bay in New Harbor. Inside, collections of books and art and things from faraway places clutter the shelves and walls and surfaces. Tall glass doors frame a view of sparkling waves and smoothly gliding gulls. When the tide is high, the salt water laps the edge of a small slice of green where a large pine stands.

This is the house Sarah Woolf-Wade’s father built; the vacation home she visited when her family came up from Massachusetts for weekends and school breaks; the place where she came to love the Maine coast and the ways of the sea.

Her father liked boats of all kinds and had boats of all kinds. Boating and sailing were an integral part of her childhood. Her mother loved boats less, but many of the paintings of sea and surf that fill the walls of the cottage are hers.

Woolf-Wade recalled a time when she was 8 or 9 when her father took her and a neighbor boy across the sound from Round Pond to Louds Island to dig clams. A storm came up and the small boat wound up broadside to the waves. “It’s the one time I ever felt afraid on the water,” she said.

Her mother saw the boat struggling from the shore and called for help. A lobster boat towed the skiff safely back to land. Woolf-Wade said her mother was so angry at her father for putting them in danger that she gave the whole batch of clams they had gathered to the lobster boat’s crew.

Woolf-Wade is a teacher, a sailor, a traveler, and a poet. She was born and grew up in Lexington, Mass. and lived most of her life near there. But 22 years ago, she and second husband Stanley Wade retired to this house in New Harbor.

Woolf-Wade attended Tufts University for three years, studying drama, before meeting first husband Gregory Woolf, a musician and artist. She moved to Washington, D.C with him and finished her degree at American University.

She switched her major to English literature because she didn’t think she knew enough about poetry. The marriage didn’t last, but the love of poetry was a lifetime commitment. 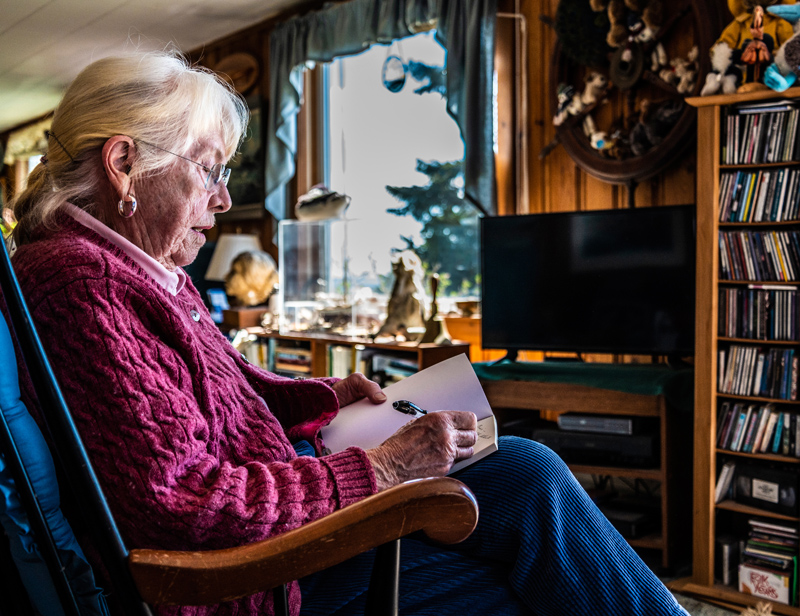 Woolf-Wade earned a master’s degree and a doctorate in education from Boston University and taught middle school for 35 years in Brookline, Mass. When she retired to Maine, she spent 10 years as a volunteer at the Bristol school.

She loved working with children, writing and producing plays for the kids to perform, taking them on field trips to explore tidal pools.

“I felt I needed to contribute something in this world,” she said of teaching.

And teaching gave back to her — summer breaks gave her opportunities to explore the coast of New England. And then the world.

She spent 14 summer breaks as the first mate on a sailing vessel around the Boston islands, and then sailed on windjammer cruises in the waters of Maine.

Never a fan of cruise ships, she sailed across the Atlantic on the four-masted Star Clipper from Antigua to Spain. She remembers that trip as an adventure, three weeks of heavy swells, and watching the land birds as they neared the Azores.

She wrote a poem about a parrot on board the vessel, whose wings were clipped to keep it from flight.

The thirst for travel continued and she took advantage of special rates with teachers associations to go to Europe, Asia, and Australia. Italy was a favorite location. And Croatia. And Nepal.

She traveled north of the Arctic Circle and around Cape Horn at the southern tip of South America. She went seven times to Scotland, cruising around the Scottish Isles.

These days she’s satisfied to explore closer to home. She has a dinghy and a small motorboat that she takes around John’s Bay. And she takes the Hardy Boat out to Monhegan Island in the spring and fall to write and revise her poetry. 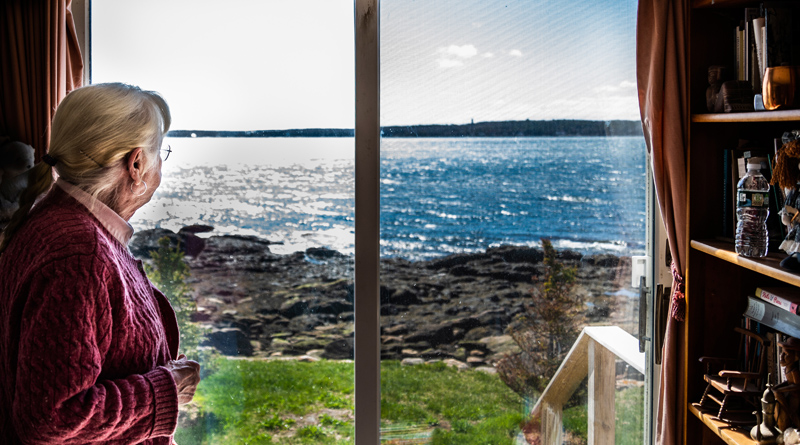 Sally Woolf-Wade looks out on John’s Bay from her home in New Harbor on Monday, April 27. Woolf-Wade’s father built the home as a summer cottage for family vacations. (Bisi Cameron Yee photo)

Woolf-Wade’s first published work was a poem. “I wish I were a lighthouse” was printed in the Boston Herald when she was 8. Since then she’s been published in over 30 journals, including the Maine Poetry Review; written four books of poetry; and composed a historical children’s novel, “Downwind from Pemaquid,” which received an honorable mention at the 2013 New England Book Festival.

Woolf-Wade names Sylvia Plath as one of her favorite poets, saying she relates to her and her writing. Ted Kooser is her top pick for modern poetry; she said he crafts poetry that’s more down-to-earth. She compares reading modern poets to viewing modern art when used to something more representational.

Woolf-Wade writes down her dreams and uses them as inspiration for her poetry. She said she dreams of sunsets and sunrises, weather and tides, life and death, children.

Most of her poetry is blank verse, a type of poetry common in the work of many classic English poets that frees the writer from the constraints of rhyme while retaining the musicality of meter. She said she writes the occasional sonnet, sometimes the more challenging Italian forms, but blank verse is her favorite.

Woolf-Wade said she hasn’t written much during the pandemic, maybe a poem a month. “I’ve felt quite isolated for the past year,” she said.

She gave up many of her social activities — her poetry group, her knitting group at the Skidompha Library, swimming at the Wiscasset Community Center pool. “Now I’m just hard aground,” she said.

But still, she walks, reads, writes emails and letters to old friends. And she watches the water. “The sea seems to have moods,” she said. “It’s been full of whitecaps for a month now.”

Woolf-Wade said she is happy here. In this cottage. On this coast. Watching the daily changes of the sea.

Woolf-Wade’s books can be found at Sherman’s Maine Coast Book Shop in Damariscotta and online at Amazon.