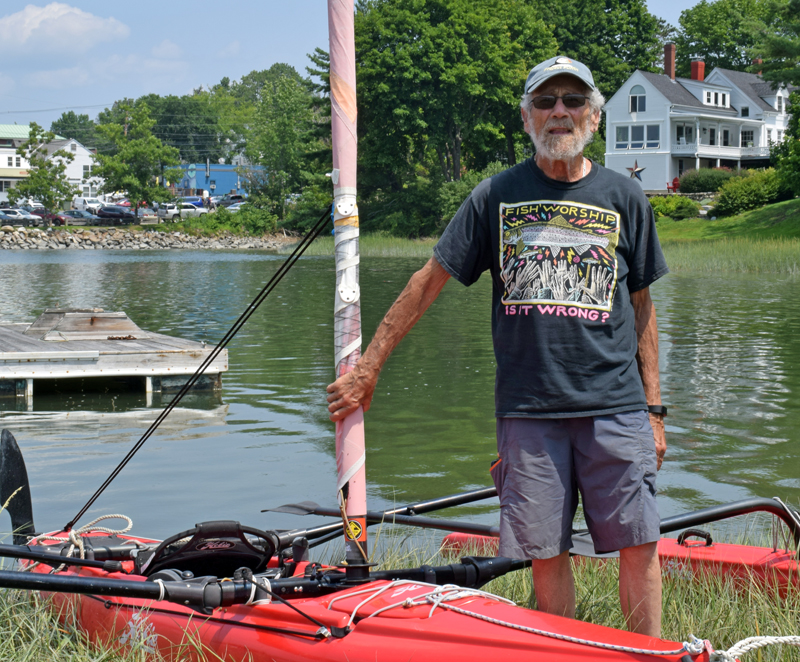 Michael “Mike” Herz stands by his trimaran sailing vessel at his home on the Damariscotta River on Tuesday, July 27. Herz has sailed all over the world and continues to sail and stand-up paddleboard in the river. (Evan Houk photo)

Michael “Mike” Herz, of Damariscotta, has performed brain research in physiological psychology, sailed all over the world, and worked to protect the waterways and bays that he loves throughout his life. He attributes most of these events to happenstance.

“All those stories are about timing, where I was in the right place at the right time,” Herz said during an interview at his home on the Damariscotta River on Tuesday, July 27.

Herz has spent his second career fighting to protect the water he loves, which he calls “Earth’s life blood.”

He helped found San Francisco Baykeepers and Maine Rivers conservation organizations, and served on a special commission to investigate the Exxon Valdez oil spill in Alaska. He is the current chair of the Damariscotta-Newcastle Harbor Committee, and has worked with Sheepscot Valley Conservation Association, which eventually merged with three other land trusts to form Midcoast Conservancy in 2016, to protect the Sheepscot River and endangered Atlantic salmon.

After receiving his Ph.D. from the University of Southern California, Herz moved to San Francisco in 1960, two weeks after riots erupted when student protestors gathered outside San Francisco City Hall to object to hearings by the House Un-American Activities Committee, which was investigating suspected communists and subversives at the time.

Herz said the cumulative effect of his time at Reed College in Portland, and his time in San Francisco shaped his thinking and eventually led him to a second career in environmental advocacy.

He spent weekends in San Francisco’s North Beach listening to jazz and going to poetry readings, and even saw Allen Ginsberg read his famous poem “Howl” at Fugazi Hall.

After the Cuban Missile Crisis in 1962, Herz was drafted for six months of military service and five-and-a-half years in the Reserves.

During his training, he was shown a movie about the city hall riots that he said was “slanted,” asserting that the riots were communist-inspired.

“I asked all kinds of questions. You might even say I baited the officer who was in charge of showing this movie,” Herz said.

He later found out through a Freedom of Information Act request that his questioning of the film prompted an investigation into his background that went all the way back to his days growing up in Minnesota.

Herz said he immediately lost security clearance and was placed in inactive reserves.

“At the end of this whole thing, it was concluded that I was not a security risk and if called back to duty, I would be a loyal American,” Herz said.

After 12 years of researching how memory is stored and teaching at the University of California, San Francisco Medical Center, another chance occurrence changed his path.

“The best thing that ever happened to me was that I had a grant turned down which was covering my salary,” Herz said.

This led him to work for a new organization called the Oceanic Society in 1973 and he then co-founded the San Francisco chapter of the conservation group.

Through his work with the Oceanic Society, Herz established a water quality laboratory and training program and an air and boat patrol to look for polluters in the San Francisco Bay area.

This led to Herz working in environmental advocacy and consulting for the rest of his life, performing research, training, and writing reports on the effects of pollution.

After reading about a newly-formed conservation group, the Hudson Riverkeepers, he founded the San Francisco Baykeepers in 1989 to keep polluters in check.

At the time, the U.S. Coast Guard had a directive to watch for drug smugglers and was not able to spend much time catching polluters.

The Baykeepers utilized a provision in the Clean Water Act, passed in 1972, that allows citizens to bring suits against polluters, essentially giving them the legal heft of an attorney general.

“That’s one of the only tools that really works, to get polluters and would-be polluters attention,” Herz said.

Herz said that today the organization has a staff of 15 people, has brought over 250 lawsuits, and recovered about $15 million in settlement money to repair damage caused by pollution.

Herz has been living in Lincoln County since the mid-1990s, when he and his first wife moved to the area. After the couple separated, he decided to stay to be involved in raising his children, discovering the joys of the small-town community and various sailing opportunities in the area.

“Since I had grown up in a small town, I stayed here and continued to do environmental work. I got on lots of boards and have been doing the same kind of stuff, advising organizations that are just getting started,” Herz said.

Currently, he spends much of his time working with Maine Challenge, which produces videos “exploring social, economic, or environmental issues that affect Mainers’ lives,” according to its website.

Herz, who will turn 85 in two weeks, still sails regularly on the Damariscotta River in his red trimaran vessel. He participated in a single-handed sailing competition from San Francisco to Hawaii and has sailed up and down both North American coasts and those in Europe.

He also paddles a 4-mile stand-up paddleboard route from his home, around Hog Island and back, every other day.

“I’ve been a water person all my life, swimming and fishing,” Herz said. He has always been drawn to water since growing up near a small lake in Excelsior, Minn.

Herz continues to be active in numerous organizations, such as Friends of the Earth, the Conservation Law Foundation, Prevent Harm, and as an advisor to the Audubon Project Puffin, which are all working to conserve the planet and the waterways he loves.

“It’s kind of the life blood of the planet. And we need to take care of it better than we have been and after all, over 70% of the surface of the planet is water,” Herz said.