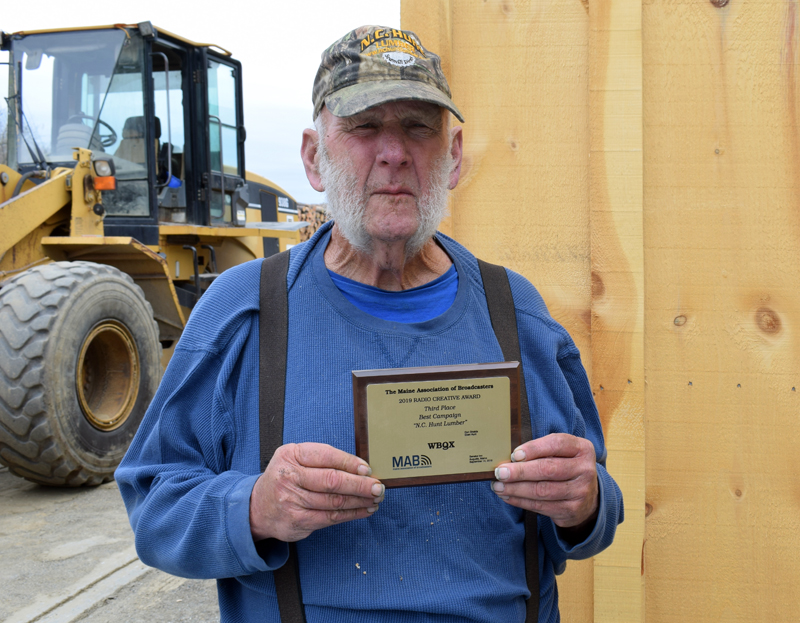 Eben Hunt holds a plaque recognizing N.C. Hunt for placing third in the Maine Association of Broadcasters’ Best Campaign competition in 2019. Hunt voices the ads, but spends most of his days using the loader in the background to screen loam at the Jefferson lumberyard. (Evan Houk photo)

For a man who is featured on radio spots for N.C. Hunt Lumber and is the voice of the company, Eben Hunt is a man of few words who prefers to quietly go about his work running heavy equipment at the Jefferson lumberyard.

“That’s all I’ve ever done,” Eben Hunt said during an interview on Tuesday, May 4. “When I was just a little fella, I’d watch somebody with equipment for hours.”

Hunt was born in Boothbay Harbor and has lived in Newcastle all his life. He attended Franklin Grammar School in Newcastle, which is now an apartment building, and graduated from Lincoln Academy.

Asked what he enjoyed about school, he said with a laugh, “Nothing — I hated school.”

Hunt said his father, Clifton Hunt, ran a gravel business. He started working with him in 1964, running heavy equipment.

After his father died, Eben Hunt went to work for his cousin, Norman Hunt, at N.C. Hunt, where he has worked for the past 32 years.

On a typical day, Eben Hunt screens loam soil, using a Caterpillar 938M Small Wheel Loader to heap the material into a screener.

“You just dump it into the screen, it goes up on a belt into a shaker that takes the rocks out of it, and we sell it,” he said.

He said that screening loam keeps him very busy, as the material sells “like hotcakes.” He said on Tuesday that N.C. Hunt had an order for 36 yards of loam going to Owls Head that day.

“That’s what I do this time of year, do it probably most of the summer. Then we screen out surface gravel for your driveway, all kinds of stuff,” he said.

About 10 years ago, Rob and Katie Hunt came up with the idea to have Eben record some radio spots for N.C. Hunt Lumber. They thought his classic, unhurried Maine drawl was perfect for advertising the company.

In the ads, Eben Hunt talks with radio DJ Don Shields about what N.C Hunt offers and often includes funny asides — such as a riff about a “honey do list” and how compost also works as a good place for “politicians to stand.”

His radio work earned N.C. Hunt Lumber third place for Best Campaign from the Maine Association of Broadcasters in 2019.

He enjoys making the ads at the WBQX studio in Rockland, although it took some getting used to. He estimated that he has recorded 50 radio spots over the years.

“It’s fun — get the afternoon off, still get paid,” he said with a chuckle.

He said that because of his hearing loss, sometimes it takes two or three times to get the ad to sound right.

“You just gotta pay attention and listen,” he said.

Rob Hunt said on Tuesday that customers come to the lumberyard specifically to meet Eben and invite him out on their boats to hang out and have a cocktail or a beer.

He nearly became a television icon when Keith O’Leary, a Newcastle resident and veteran of the television industry, filmed a few episodes of “Cowshit Corner,” which featured Eben and his buddies drinking beer and talking at the Newcastle landmark.

O’Leary aired the pilot of the show on Lincoln County Television in February 2014 and began shopping the show to various networks. However, Hunt said the show “never materialized.”

Hunt said he would gather with his friends at Larry Russell’s barn near Cowshit Corner, where Russell ran the dairy operation Dyer’s Valley Farm Inc. until he sold the farm and moved to Florida.

The group, which also included locals Rodney “Fuzzy” Crockett, Mark Fenderson, Tavio Luksic, and “Marijuana Pete” Roscop, gathered at the farm every Sunday for what they called the Cherch of the Holy Cow, when they would drink beer and talk about the events of the week.

“A couple cases of beer, sit around and talk it over,” Hunt said of the Cherch of the Holy Cow, noting how much fun those Sunday gatherings were.

Hunt said he also loves to hunt deer in November.

“Get out in the woods, find a nice, comfortable spot, relax,” he said.

He has lived in Newcastle his whole life and never wanted to go anywhere else. Of what he likes most about the area, he named the “people” and the “quiet.”

At the end of a long day running heavy machinery, he said, he just likes to go home and have a few “blues,” or Bud Lights. He currently lives 7 miles down the road from the N.C. Hunt mill in Jefferson, with his daughter Rebecca and her husband, Randy Butterfield.