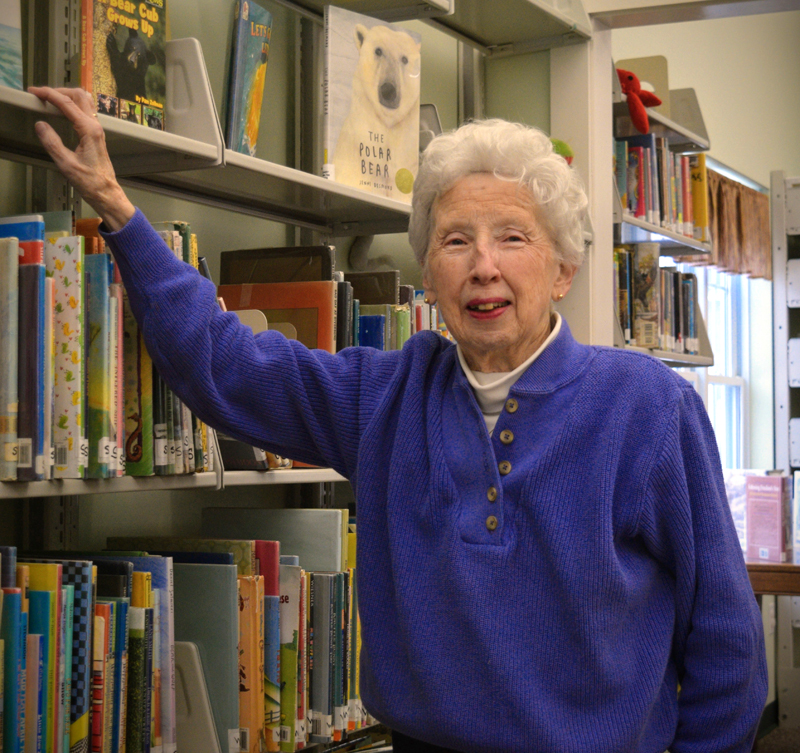 Jean Lawrence, a former Medomak Valley High School teacher and president of the Waldoborough Historical Society, peruses the books she used to read to young visitors in the children’s room of the Waldoboro Public Library on Feb. 7. (Nate Poole photo)

Lounging in the children’s room at the Waldoboro Public Library on a Monday afternoon, Jean Lawrence doesn’t need questions. A perpetual engine with a propensity for storytelling, all the former teacher needs is an audience.

One of the most involved figures and well-known faces in Waldoboro, Lawrence is in her element at the library. She helped start the fundraising campaign for a new library building, served on both the library board and with the Friends of the Waldoboro Public Library, and took on reading duties for young visitors in the children’s room.

Even now, she continues to join the book group that meets at the library every third Wednesday each month to scratch that English teacher itch.

Despite her passion for teaching, these days Lawrence is, first and foremost, a writer, and a busy one at that.

She has written several books for the Waldoboro Historical Society and she has been published across various outlets, including the Maine Memories Magazine, Goose River Anthology, History of the Waldoboro Methodist Church, and The Lincoln County News.

Lawrence has, quite literally, written some of her life’s chapters. For her high school 50th anniversary reunion, she wrote a memoir chronicling her early years growing up and learning in the Wickford School System as a gift to the members of the class.

In fact, the only edition of her life that Lawrence has not yet written is her time in Waldoboro, beginning in 1970.

“I have written all the chapters in my life so far,” she said. “But there are too many books and stories that I’d rather write at this point.”

Lawrence grew up in Wickford, R.I., and while she first came to Maine when she was three months old to visit her relatives in North New Portland, she never gave any thought to the Midcoast of Maine until she met a man from Waldoboro named David Lawrence at the first Baptist Church of Wickford.

However, something that Lawrence has given thought to for as long as she can remember is her desire to teach. Playing outside as a child, one of her favorite games was to sit her sister and friends around the front step of her home and play school. Or at least she would until her students revolted.

“He said, ‘I’m going to make you a promise,’ he said. ‘If you complete high school, go to college, and become equipped to teach school, I will hire you’,” she said.

She graduated from Wickford High School in 1957. Four years later, she returned with her degree in education and English in hand and the superintendent fulfilled his promise.

However, Lawrence did not teach the fifth grade; by that point she was bound and determined to teach literature at the secondary level.

When she moved to Maine with her husband in 1970, Lawrence taught English for one year at Lincoln Academy before moving to Medomak Valley High School, where she would spend nearly three decades. Even then not yet satisfied, she made her way to the Midcoast School of Technology in Rockland to teach other teachers for another nine years before she retired.

Lawrence always taught a unit in her class in which her students learned how to write formal reports and news stories. Eventually, the teacher began working with a publishing company every year to begin publishing the Medomak Valley High School News.

“It was something that served the community, and that’s unusual. The community serves the children usually, but here we had children serving the community and they were loving it,” she said.

Lawrence received a number of awards for teaching over the course of her career, but one accomplishment in particular stands out for her.

One year, an especially determined class made a promise to Lawrence that each student would get a piece published in a magazine or newspaper, and they were successful. In fact, they were so successful that the story was picked up by the Harvard Educational Review and the National Council of Teachers of English Magazine. Ever the proud instructor, she keeps a scrapbook with all the published stories.

Lawrence, who serves as the president of the Waldoborough Historical Society, counts many students among the citizenry at each annual town meeting, including the historical society’s vice-president, Bill Maxwell.

“I chased that kid up and down the halls of Medomak Valley High School to get him to take his hat off for years,” she said.

After Maxwell graduated and Lawrence retired, she found herself working with him on a written history of the Waldoboro Fire Department as he was the department’s historian. At one point, the fire department chief at the time approached Lawrence, concerned that she may not want to work with Maxwell.

Lawrence’s two sons, Matthew and Andrew, grew up and found their own success well beyond the Medomak Valley region, and so most of her free time is directed towards the historical society.

Currently, the historical society is working towards creating more exhibit space and a working bathroom between the Hauck/Bailey building with the abutting Richard Wallace Barn, where the society’s museum is located.

Lawrence is also an active parishioner of the North Nobleboro Baptist Church and the Waldoboro Woman’s Club. Suffice it to say, she is keeping plenty busy.

While she may very well never write her Waldoboro chapter, a town full of students would certainly be eager to pick it up.