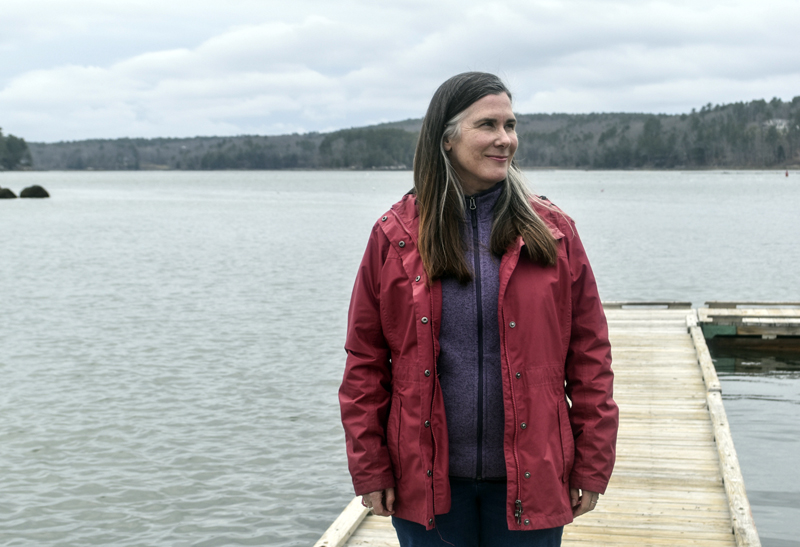 Heather Leslie stands at the town landing in Damariscotta on April 26. An ecologist, Leslie is the director of the Darling Marine Center and sits on the Damariscotta-Newcastle Shellfish Committee. (Anna M. Drzewiecki photo)

Heather Leslie peered over the railing of the wooden pier jutting out into the Damariscotta River. At mid-tide, she didn’t quite see what she was looking for: Baby barnacles.

“This is a great time – well, not exactly the time of day – but it’s a great time of year to see baby barnacles,” said Leslie, who studied barnacles for her Ph.D. at Oregon State University. The blue-green waters lapped quietly against the crags and seaweed beneath the pier.

“A lot of my work was really focused on what contributes to the success of barnacle populations in different places. And I looked at places on a variety of scale like one rock to another or one bit of shoreline to another. Or even places a few miles apart that have radically different ocean conditions just because of the way the coast is. Just trying to understand which of those settings and why influences barnacle pregnancy rates,” said Leslie. “They’re a lot easier to work with than some more charismatic species.”

But Leslie’s focus shifted from barnacles to fisheries to humans to somewhere in the entangled spaces in between.

Since 2015, Leslie has served as director of the University of Maine’s Darling Marine Center in Walpole.

“I returned to Maine and the Darling Center in 2015, when I was recruited as director, and that’s my primary job: To serve as director of the lab,” said Leslie, a self-identifying ecologist and tide-pool biologist by training, who also teaches in the School of Marine Sciences, serves on the Damariscotta-Newcastle Joint Shellfish Committee, participates in collaborative research projects, and publishes in academic journals.

She had lived in the area about 25 years ago, when her husband was studying at the Darling Center. “I made my way back,” she said.

In April, with only one active lab, the Darling Center was quiet. The sounds of a construction project, birds, boats on the river, wind in the tall pine trees.

Leslie pointed out the white clapboard buildings that formed the original center back in 1965.

“This was a gift to the University of Maine in ’65 by Ira Darling,” she said, nodding to the building that was his summer residence, when he wasn’t in Chicago.

A businessman, Darling once farmed the property, raising sheep on the sloping lands, which were unforested in his time. In 1965, Leslie explained, he gifted the property specifically to be a marine laboratory for the University of Maine.

“So that was the start of the Darling Marine Center,” said Leslie. “And we’ve been engaged in marine research and education and work with the community ever since, for the last 55 years.”

“It’s two non-adjacent parcels that all together are about 182 acres, depending on where the tide is at, right?” said Leslie.

“I like to call this the Woods Hole of the North,” she said, referring to a network of laboratories, scientists, and community members working on marine and coastal science projects.

“I actually haven’t done the count,” she said, “But I think we have somewhere approximating the same number of institutions really, probably not the same number of individuals. Some of those operations are pretty big. But we’re just spread out a little bit more. So between the university’s marine lab here at the Darling Marine Center, and then Bigelow Laboratory for Ocean Sciences, which is three miles downriver. And then the (Department of Marine Resources) Lab, which is just on the other side of the Boothbay peninsula.

“When you put those three institutions together with other organizations with active science programs, like the Island Institute, and Hurricane Island Center for Science and Leadership,” said Leslie, “you have hundreds of people, trained scientists and other professionals, working on marine science and education issues. We’re spread out. But there’s a lot of collaboration among our groups, in terms of research and engagement with communities.”

Early projects here in the 1960s and 1970s were “collaborative between folks interested in growing oysters in the river, and people who knew about the biology and the science of growing shellfish,” said Leslie. “So this collaboration with industry has been part of our origin story.”

She noted about 40 year-round researchers and educators – some on land and some seagoing – with more visiting students in the summer. Some, like Leslie, are involved in collaborative work on environmental DNA with the Bigelow Laboratory located downriver.

“I’m an ecologist. So I think about the connections between different parts of the ecosystem, including the people who were living and fishing and working and enjoying the coast and the ocean,” said Leslie, who also still works from fishery field sites in Mexico. “A lot of my work in the last 20 years has focused on fisheries.”

For this project, on environmental DNA, “the largest component of my work … is actually social science. So we’re studying the science as it’s being done,” said Leslie.

Her shift towards integrating social sciences came earlier, when she was still a graduate student.

“While I was studying tide pools in Oregon for my graduate work, I also got involved in starting to put together information about how marine parks work,” said Leslie. “There hadn’t been a lot of systematic study of parks in the ocean. We knew a lot more about the benefits of protecting places on land, and less about the benefits of protecting places in the ocean and how that impacted individual species and whole ecosystems. So I did that work on the West Coast of the U.S. and pretty quickly moved into questions related to fisheries, because fisheries are such an important way that people are connected to the ocean, not just through food fish, but also the employment opportunities and the cultural components of fisheries (that) are really important in a lot of different places, including here.”

That work also brought her here, to the Darling Marine Center, with her students while she was teaching at Brown University.

Now, in her role as an appointed member of the Damariscotta/Newcastle Shellfish Committee, Leslie has put the same beliefs and methods into practice locally. She’s been working collaboratively with students and other researchers with the committee.

“We came first to that work to listen to what committee members and harvesters and other folks … (to) what questions they had about the shellfish resources on the Damariscotta (River). And that led to a series of field studies where we’ve gathered information on where clams and oysters and other commercially harvested species are located in the upper (Damariscotta) River. And we also have synthesized the knowledge of harvesters and other local experts through a local knowledge survey.”

The coast – and the culture of its study – are not new to Leslie, but part of her origin.

“I grew up in Plymouth, Mass., on the coast, and was actually involved in town government as a high school student,” she said through a laugh. “I was really interested in how people connect coastal places and also how decisions are made about coastal conservation and stewardship.

“I learned early on that science, particularly biophysical science, is an important part of those decisions, but it’s far from the whole story. And so I’ve increasingly become interested in bringing social science research into those conversations, both through my activities as a citizen, but also as a scientist,” she added. “My research now is really very integrative.”

Back on the pier, Leslie’s shoes clicked against the wooden planks. Across the river, an osprey landed in a tall tree’s grasp.

“Over here, there’s been soft-shell clam and razor clam experiments,” she said, “Scallops and seaweed have tended to happen over there.”

A boat drove by, throwing out white lines against the calm brackish water.

“There’s questions that we can answer through research about what might happen if we do X, right. But what I think is a more fundamental question that the researchers can help answer but don’t have the answer to is what do people care about? And what should we do?”

“As researchers, I think it’s important that we (are) comfortable with not having answers to those questions,” she said.

“That’s how we’ve tried to approach the work with the shellfish committee upriver – really listening to what people care about and what their concerns are, and trying to share information about the ecology and the people who know that ecology well, so that the committee ultimately, and the town that’s responsible for managing shellfish resources, like in most Maine communities, can make informed decisions based on what they want to see.”