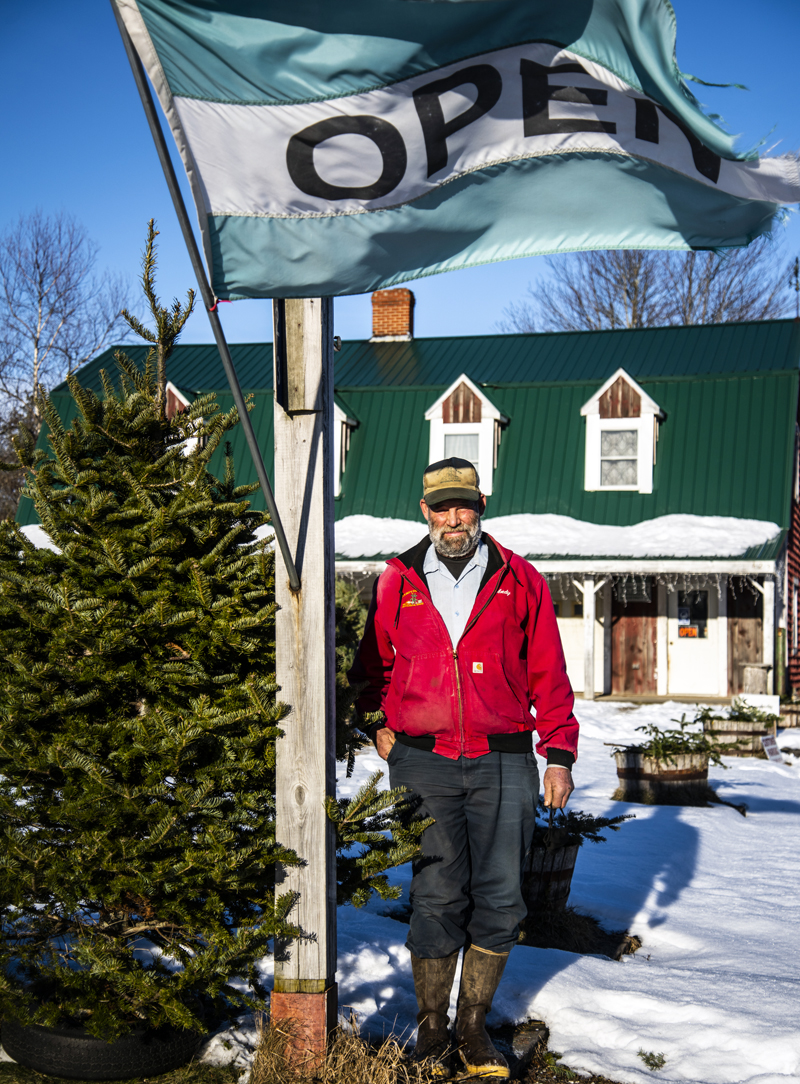 Andy Williamson stands by the open flag at County Fair Farm in Jefferson on Dec. 23. The property was once the site of the Lincoln County Fair. (Bisi Cameron Yee photo)

“I like to have the first corn around and the last corn around,” said Andrew “Andy” Williamson IV, longtime owner of County Fair Farm in Jefferson.

Sweet corn is Williamson’s favorite vegetable, although he grows a wide variety of others on his 64-acre farm. Williamson said that people regularly drive by and ask if it’s ready yet while he’s still establishing the early corn. This year he said the first cobs were ready to pick on July 22 or 23, although he’s seen them ready as early as July 10.

According to Williamson, the hills are high enough at the back of the farm that when he grows crops there, the first frost doesn’t always rise enough to impact them. As a result, he can sometimes extend his growing season until almost November. Williamson has sweet corn available 90-110 days out of the year.

Williamson grew up in Jefferson. After graduating from Lincoln Academy he attended the University of Maine at Orono, then studied at Cornell University. He took a weather course. He studied plant science, vegetable science, and pomology — the study of fruit. He had decided to be a farmer.

Back in Jefferson, Williamson worked the third shift at Bath Iron Works so he could farm during the day. BIW put him through welding school and provided a second source of income as he became established.

Williamson opened his farm stand in 1995. It was part of his plan when he bought the place, because it was right beside the road. “You aren’t going to have a successful farm stand at the end of a dirt road,” he said.

Williamson believes his corn is so good because he takes care of the soil and takes care of the crops. He was an early adopter of no-till farming and grows everything he can using that method. “No rototills, no plows,” he said. “You just open the ground enough to put the seed in and let the soil take care of itself.”

While smaller crops like tomatoes and peppers don’t lend themselves to it, Williamson is always looking to do more no-till farming. He believes the method is better for crops and better for society. And it saves a tremendous amount of time. Williamson can plant 6-8 acres of vegetables in less than two hours. It saves fuel and wear and tear on tractors as well. “Worms that I don’t disturb do the plowing for me,” Williamson said.

No-till farming is not commonly practiced, despite being around for decades. Williamson said that some farmers lack the necessary education — and the daring — to do it. He said the practice is all about figuring out what worked and what went wrong.

“You have to get past the ‘oh, it doesn’t work’ frame of mind,” he said. “Figure out the issue and figure out how to change it.” He said there are always different things to keep learning. “That’s what makes it fun.”

Williamson’s farming philosophy includes the care of the land between harvests and a focus on diversity. After his cash crops are done, he plants cover crops, most often oats or rye. These cover crops not only help fertilize the soil, but also prevent erosion. And, as an added bonus, they make good grazing.

Williamson doesn’t just farm vegetables. He believes that putting animals on the field makes everything work together. He maintains a cattle herd of 15-20 animals, including brood cows. He raised seven calves this year. The herd grazes on pastures until Christmas.

Williamson also raises pigs. He bought his first sow when he was 16 or 17. He said pigs are the least capital-intensive farm animal to raise — easy to get into, easy to sell, and they don’t take up much space. But pigs root too much. They don’t make good grazers for cover crops. So Williamson keeps them in fenced enclosures with shelters fashioned from old oil tanks.

He has chickens too. He’s raised broilers for the last few years but has no hens for eggs anymore. “I don’t want to take care of chickens every day,” he said. “It’s quite a bit of work already to take care of cows and pigs.”

Hard work is something Williamson knows about. And embraces. He farms over 250 acres of land in four local communities. He manages the popular pick-your-own apple orchards that abut his land. He plants the farm, cares for the animals, and runs the farm stand as well as a seasonal corn maze. He plows his neighbors’ yards. He’s up as early as 3 a.m. if he has to spray the apple orchards. And it’s not unusual for him to work as late as midnight. “I don’t care to work any less than 12 hours a day,” he said.

Williamson may have been born and raised in Jefferson, but that doesn’t mean he hasn’t seen something of the world. In 1970, his father, Andrew Williamson III, a math teacher and eventual head of the math department at Lincoln Academy, received a grant from the Ford Foundation to study mathematics education. The family was packed into a motor home and spent the next school year traveling across the U.S. Williamson said he visited 40 states that year.

Next his father took them to Hawaii for a four-year stint at Mid-Pacific Institute in Honolulu. Williamson, who was 12 when the family moved, said, “I didn’t like being stuck in Hawaii for four years — I couldn’t stand up on a surfboard. I’d rather hunt than surf.”

“I was in a hurry to come home, get back to doing the things I knew,” he said. “There wasn’t any place better than here.”