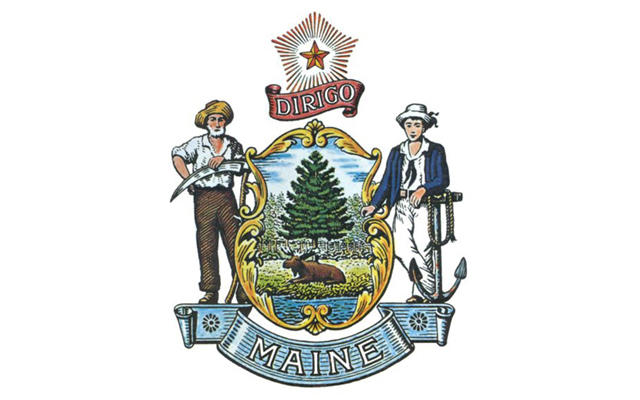 The Great Seal of the State of Maine. (Image courtesy Calvin Dodge)

This year has brought back many wonderful memories of my grammar school days and my last year at Franklin Grammar School when I was in the eighth grade. Back in those days, one had to complete a course in Maine state history and pass it to go on to high school. I recall that each eighth grade student had to make a large notebook of items containing photos, items on Maine events and Maine statehood, and items that lead up to Maine becoming a state on March 15, 1820.

This year, the Portland Press Herald has had some outstanding articles on the history of Maine becoming a state. We both hope the young grammar-school children have had a chance to read many of these fine articles and may even make a scrapbook of these items for future reference to the history of our state.

I have been always interested in Maine history and the genealogical tree on both sides of our family and when they came to this area before Maine became a state and was part of Massachusetts. On my mother’s side, Richard Bailey, of Yorkshire, England, came to Rowley, Mass. in 1638 aboard the ship Bevis at age 15.

Then they moved down into the area which is now known as Lincoln County here in the state of Maine. We can say with great pride Maine has contributed many distinguished men and women who have gone on to the U.S. House and Senate to build our strong nation.

One newspaper article we read started that the Portland Gazette published an article about the Maine state seal on June 12, 1820. It goes into some detail to explain the emblems of the seal of the state were proposed by Benjamin Vaughan, Esq., of Hallowell, and the motto, description, and explanation are from the pen of Col. Isaac G. Reed, who moved to Waldoboro in 1808. His occupation was a lawyer, at the young age of 25 years.

The Maine state seal shows a star at the top, which represents a mariner’s guide used by sailors in navigation across oceans and seas, then the state motto “Dirigo” under the star, then a moose under a pine tree with a farmer on the left and a sailor on the right.

The motto “Dirigo” has been a perfect choice in our state history. Maine has held strong to this motto for over 200 years. We also find that a number of schools, businesses, and organizations have incorporated the name of Dirigo into their names. We often say “Dirigo” sounds like a rallying cry or a change to our way of life. Many changes have taken place over the last 200 years in what we manufacture, what our farms raise, our education system, and our transportation system and highways. Maine people are still very proud in what we do with our everyday life, our environment, and keeping our rivers and waterways clean. We still have a strong way of stepping up to any challenge which affects our way of life and state.

We both want to again remind the young grammar-school children it is a great time to cut out history items about Maine becoming a state. One could make a scrapbook of all the newspaper items or record them on a computer for future use.

Referring back to our article on old Nobleboro building, we had a real nice call from Mrs. Ruth Erskine Brewer, of Nobleboro. She told us she went to the old Nobleboro school that sat next to the old Grange hall for four years before she went to the grammar school located in the Damariscotta Mills area. It was so nice to have her tell about her early childhood days at the old school.

Just for a note of interest, my cousin gave me an old postcard that was sent to my aunt, Miss Blanche Bailey, North Newcastle, dated 3 p.m., Sept. 14, 1910. My aunt Blanche Bailey was born Oct. 31, 1897, so she would be 13 years old at that time. My aunt Blanche’s mother was Mary Jane Baker Bryant before she married Jacob Bailey, of Pittston, on May 1, 1894. 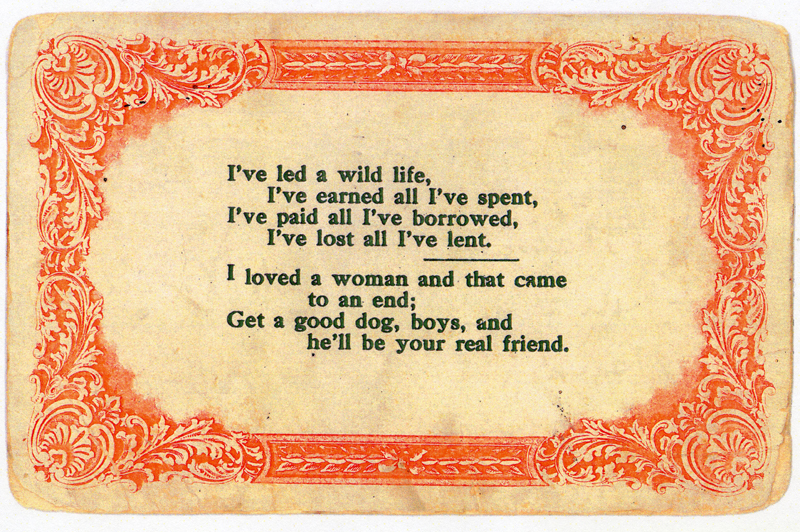 The postcard sent to my aunt Blanche Bailey read:

I loved a woman and that came

Get a good dog, and

He’ll be your real friend.