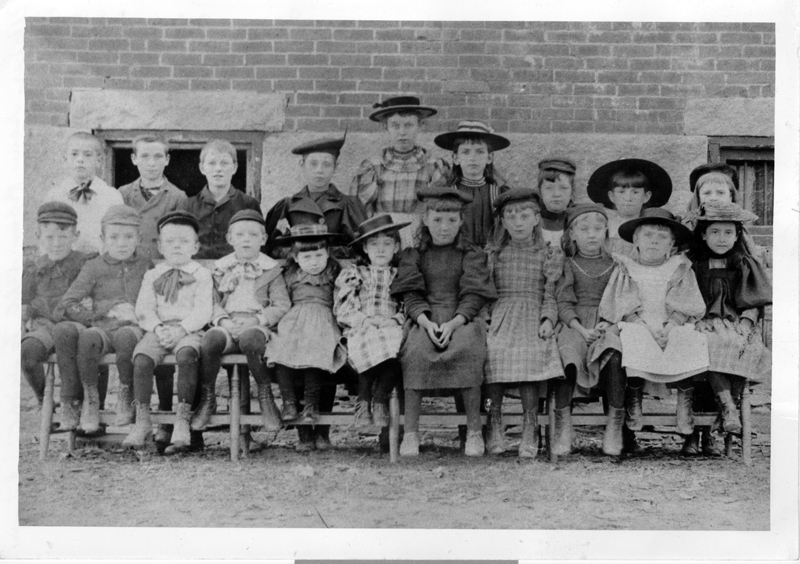 This past week, during the period of hot weather, I stayed inside our home, where it was quite cool. This gave me a chance to go over many of my books with photos of the Damariscotta area. To my delight, I came across a number of old photos I had forgotten all about.

I found one school photo taken on the side of the two-story brick school building on Church Street. The first floor housed the first four grades, or primary grades, and was called the Longfellow School. The second floor housed grades five through eight and was called Kepling Grammar School.

The Longfellow and Kepling building was in District No. 1. One article stated that this was the best constructed school in the district and had the best teachers, who stayed year after year and received the best wages of all six districts.

This is a great photo because it shows the boys in their caps and the girls in their bonnets and truly shows the type of clothes worn at this time period.

I often say a really good photo is worth a thousand words. One can see the schoolchildren in the front row are sitting on an old-fashioned long settee, which has a back and arms on both sides.

Back in the late 1870s, many schools, town houses, Granges, and other lodges, like those of the Masons, Red Men, and Odd Fellows, had these settees sitting around the sides of their halls for people to sit on. Back in the 1980s, these settees would sell for $500 or more in an auction or antique shop.

I wanted to check the age of some of these boys in the school photo. I found that Hampton Barstow was born in 1881 and Harold Castner was also born in 1888. Rufus Stetson was born in 1886 and Charles Pendleton was born Aug. 4, 1885.

Here is a little history of some of the schoolchildren in this photo. Hampton C. Barstow was born March 18, 1888 and died June 28, 1948. He was educated in the school of Damariscotta. He was a very capable contractor and builder and for several years ran a general store in Bristol Mills.

Harold W. Castner was born Nov. 16, 1888, son of Edward and Lillian Cox Castner. He was educated in Damariscotta schools and Lincoln Academy in Newcastle. Following high school, he moved to Portland, where he became a journeyman electrician.

In the early days of radios, he became an expert in wireless and served as a radio operator in the U.S. Navy during World War I. In 1930 he came home and worked at the former Jonah Morse Shipyard in Damariscotta.

He became Damariscotta’s first real historian and collected and wrote many articles on Damariscotta history. He wrote a series of Lincoln County historical booklets.

Charles H. Pendleton was born Aug. 4, 1885, son of Henry D. and Abbie Jackson Pendleton. He went to Damariscotta schools and moved to Portland. He moved back to Newcastle, where he conducted a successful blacksmith business until his death.

Mr. Charles H. Pendleton had two children, a son, Adelbert Pendleton, and a daughter, Mrs. Theano Averill. He had one grandson, Clinton Averill, of Newcastle.

The first boy in the back row was Rufus Stetson. He went to Damariscotta grammar school. He went on to college and medical school and became a fine doctor and surgeon. After many years in service, he came back to Damariscotta and set up his practice in his home, which was known as the Matthew Cottrill House, on Main Street, Damariscotta, in 1944 and also at Miles hospital. Rufus Stetson was born in 1886 and died in 1967 at 81 years old.

We will now take Mabel Cotter, who is in the front row, nine in from the left. She was the daughter of George L. Cotter, of Damariscotta. Mabel Cotter was first married to an Alexander and they had a son, James D. Alexander. Mabel and her son ran the five-and-dime store on Main Street for a number of years. Later she had a store in the first building on the right as you come off the Damariscotta bridge from Newcastle.

Mabel’s second marriage was to a Sherman. Mrs. Mabel Sherman continued the Sunday paper business that was established by her father, George L. Cotter, in 1898.

Mabel often told the story of how the papers came in by train at the depot and her father was always on hand to assemble them, with the help of his children. They would then drive the horses and wagon down to his market. Mrs. Sherman carried on the business with her son, James D. Alexander, and her grandson, James E. Alexander, for nearly 60 years.

I remember as a young boy going down with my father to get the Sunday papers and seeing Mabel Cotter Sherman hand customers the Sunday paper, always with a big smile. We still have some Christmas items, tree decorations, that my mother bought at Mabel Cotter’s five-and-dime store.