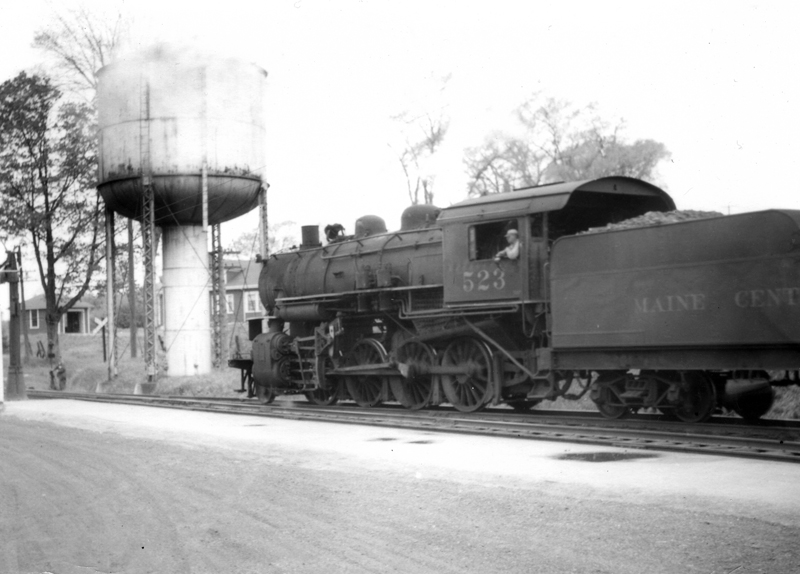 Train at Newcastle station, Academy Hill. Class W Steam loco, 2-8-0, built by American Loco Company No. 523, 1913. No. 523 is heading back to Brunswick and then on to Portland. (Photo courtesy Calvin Dodge)

The time period of this article takes place in the fall of late October 1949. I was still going to Franklin Grammar School and my teacher was Mrs. Thelma Clark and she had grades 5 through 8 at that time.

This past week I found myself going back through some of my parents’ family diaries and old newspaper clippings during the late 1940s.

I recall from wonderful past memories that I always enjoyed going with my father on weekends and riding in his five-yard dump truck when he was doing jobs for his friends.

Here again I recall many homes were still burning hard coal for their winter heat in their hot water furnace and stoves. My father was in the sand, gravel, and landscaping business, as well as doing different types of business on the sidelines with his truck.

One such deal Dad worked out with Mr. Harry Melville, who owned the Melville Coal and Ice Company. Melville’s coal company was located near the Maine Central Railroad station on a spur track or side branch off the main rail line. Mr. Melville did not want his truck to take long trips out of town so he often had my dad haul coal to Boothbay or East Boothbay or the Southport area.

Mike Spencer and his son Howard Spencer used to unload hopper carloads of hard coal when they were placed on the siding by Harry Melville’s coal shed and storage building. They used to run a coal conveyer belt which carried the coal from the bottom of the coal commander car up the long belt to an opening in each section of the coal storage shed. So my father reached a deal with Mr. Melville and Mike Spencer would load Dad’s dump truck on weekends when Mike Spencer was off duty from the Maine Central Railroad. As I look back, I can see that Mr. Mike Spencer was able to make some extra cash for his family at that time. 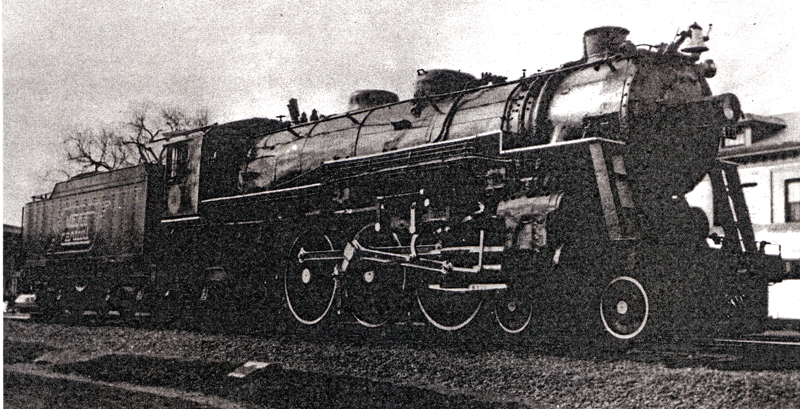 Steam engine No. 470 was the second engine in the double-header freight train that was pulling some 67 coal cars loaded with nearly 100 tons each. Both engines were of the same class, Class C, 4-6-2 wheel alignment. (Photo courtesy Calvin Dodge)

Now for the rest of the story and the great event that was to come.

Mike Spencer returned from the railroad station office and spoke to my father. As I recall, he said to my dad, “Melville, you ought to stay for about 15 minutes for the railroad just let the station agent know that a very long special freight train was going to pass by on its way to Rockland with a double header pair of steam engines. You don’t see this very often on the Rockland branch.”

He also informed him he wanted him to take the sidecar and check his section of track after such a heavy freight train had passed by with two large steam engines. He also went on to say that the Wiscasset station agent had just informed the Newcastle station agent of the news as the freight train was passing by.

So my father and I drove up to the side of the Newcastle railroad station and parked. Dad reached under the truck seat and gave me a large notebook and a pencil and said, “I know you like history, so please record what you see with your own eyes for future history records.”

So Dad and I walked out onto the station platform and waited a few minutes. Then I recall it was just like yesterday, the crossing lights came on and the large steam engines were seen coming around the curve by the Newcastle Grain Company. 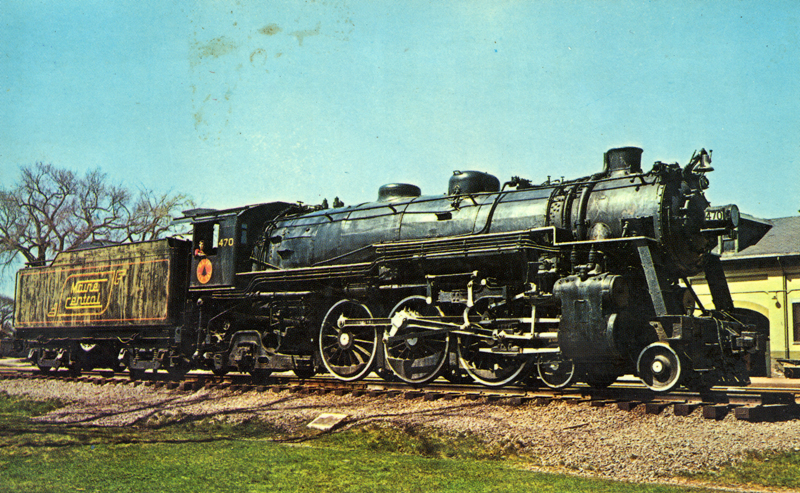 4-6-2 wheel alignment a postcard photo of steam locomotive 470, it made its final run, round trip from Portland to Bangor on June 13, 1954. No. 470 was one of the two steam locomotives that pulled the 67 car loads of coal through Newcastle in 1949. (Postcard from the Calvin Dodge collection)

If I only had a camera that day. I did my best to write down and record what I saw to the best of my knowledge and was able to write down and do my research with my book on Maine Central steam locomotives of past years.

Standing beside my father, I thought I would never see the last freight car pass by with its caboose. If my count was right, this special freight train was made up of 67 gondola cars full of coal. These gondola cars were made to transport bulk commodities. This special shipment of coal came from the Portland coal terminal or the Bath coal terminal where shiploads of bulk coal arrived weekly. This must have been a special shipment of coal to the Dragon Cement Company which is located in Thomaston for their winter use to fire their large furnace kilns that were used to heat and crush the line rock into cement.

These two steam locomotives were built by the American Locative Company in 1924 for the Maine Central Rail Road. This steam locomotive had a tractive force of 37,700 pounds. The total weight of the engine was 272,000 pounds, its tender weight 190,800 pounds, the engine and tender had a total length of 68 feet, six inches. The builder’s ship numbers were 65554 and 65555.

I also found the engine tender could carry 8,000 gallons of water and 14 tons of coal for fuel. When the two steam engines were hooked together, they had a total length of 137 feet long. What a huge mass of horsepower when these two steam engines passed by my dad and I with the sound of hissing steam as the two engines passed by hauling a long line of coal cars and its caboose. 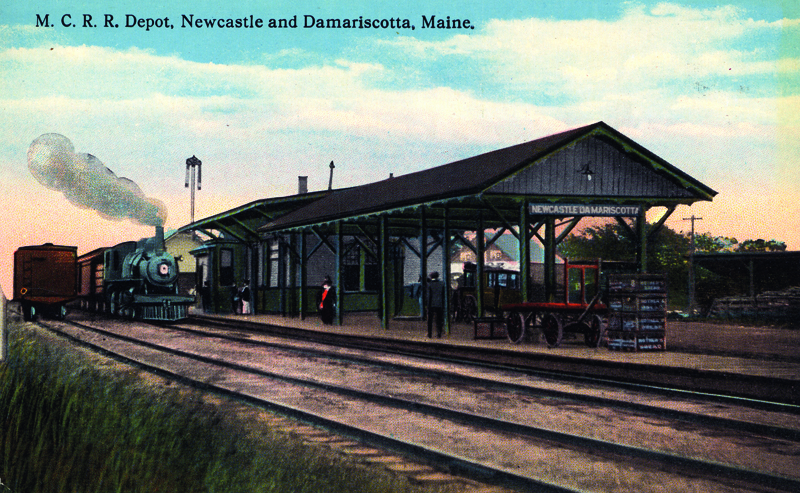 A 1920 postcard photo of the Newcastle and Damariscotta M.C.R.R. Station with steam locomotive heading west to Brunswick on the Brunswick and Rockland branch. (Postcard from the Calvin Dodge collection)

The two steam engines that passed by us were classified as a C type of steam engine and had a wheel alignment of 4-6-2 and the tender had eight wheels under it. We can find the steam locomotive No. 470 on display today at Waterville, Maine, railroad yard.

This special double header steam engine was pulling 67 coal cars that each held somewhere around 100 tons each. The length of the train was nearly three quarters of a mile. So you can see it was truly a sight to see as it passed the Damariscotta-Newcastle railroad station heading to Rockland.

We find that 1949 was also a sad year for the Maine Central Railroad line that passed through Newcastle on Route 215 at the Damariscotta Mills crossing. Two Lincoln Academy students riding in a 1937 sedan were fatally injured at the Damariscotta Mills crossing when hit by a Maine Central Railroad locomotive. The names of the two students were Robert Skilling and Rudolph Rankin, both from the town of Alna.

Lincoln Academy established an industrial arts award in honor of Robert Skilling. I won that award when I graduated from Lincoln Academy my senior year.

Remember to greet everyone with a smile and a friendly word of joy.