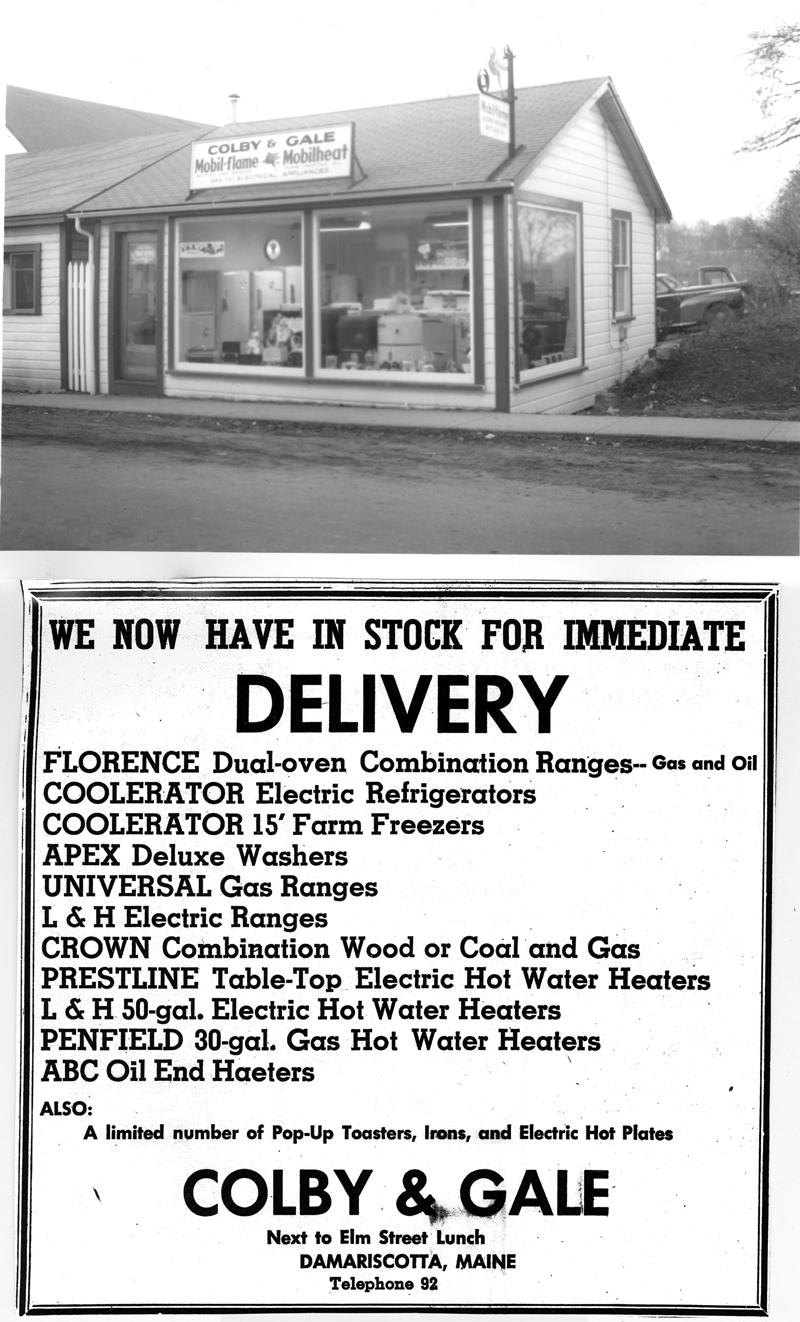 The old saying “time and tides wait for no one” is so true in many ways. I also find it very interesting to turn the pages back in time and see the many changes that have taken place here in Damariscotta since I was still a young boy in grammar school. In this article, we will turn the clock back some 74 years to July 15, 1948. The town of Damariscotta has just had a three-day centennial of its 100th birthday. I still find that I still have many wonderful memories and events stored in my mind as a young boy of the age of 12 years.

I have collected many great photos of that event, as well as many old newspaper articles telling about the event. Many of the businesses around the county put ads in the newspaper congratulating the town of Damariscotta on its 100th birthday. So after 74 years one can use these ads to help place the businesses that were in our town in 1948.

The weather was gorgeous for the three-day event, a bit on the hot side. There was a great parade with many floats. The parade was divided into sections. The parade started down Main Street led by Col. Raymond Dunning, chief marshal on horseback. There were hundreds of people in the parade, some of the men and women were dressed in typical costumes of the time.

In the second division of the parade was the queen float by the garden club, then an old style hay wagon with the ladies of the Twin Villages Junior Woman’s Club. The Massasoit Engine Co. showed their old and new equipment. Round Top Farms had three floats, old-time milk delivery, the modern methods, and milk production yesterday and today.

Two weeks ago I showed you a photo of a horse-drawn hearse with a casket with the deceased town debt in it.

The fourth division of the parade was headed by the Lincoln Academy band. There were other groups that followed and the sheriff’s department closed the end of the parade.

One ad I liked in the 1948 issue of July 15, 1948, was an ad that read “Kaiser-Frazer – International, Willys Overland.” It also had an ad for a 12-foot boat complete with 3 HP Flambeau outboard, oars and painter $18. They sold outboards and serviced and repaired them. “Auto Lubrication and Repairs, Tires, Accessories, Batteries and Parts, Damariscotta Garage Inc. Telephone Damariscotta 58.” These three brands of cars and trucks are no longer manufactured. 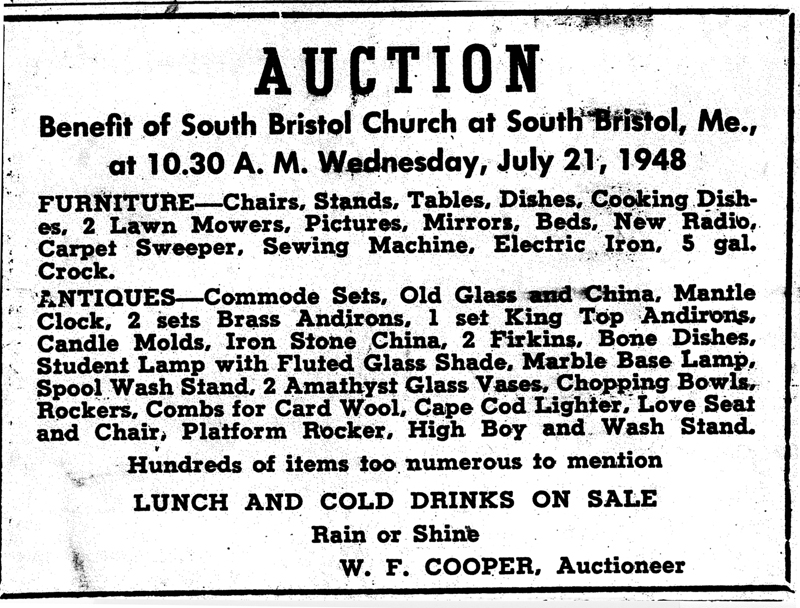 An auction notice my father-in-law did when he was an auctioneer in July 15, 1948. (Photo courtesy Calvin Dodge)

We had a taxi service called Serv-All. It was a 24-hour service and its phone number was 232 and it was also agency for the Greyhound bus service. They were located on lower Main Street where the fish market is located in 1948.

Norman B. Jones ran the Chevrolet dealership here in Damariscotta in 1948. The five & dime called the Pine Tree Variety Store was managed by Emmett Weed on Main Street, Damariscotta, 1948.

In 1948, Mrs. Mabel Alexander was selling the Sunday papers at the stand where members of her family have handled them for 50 years. Alexander’s Five & Dime was Cotter’s Market for many years and Mrs. Alexander’s father, George Cotter, was a familiar figure at the store and I have a real nice photo of the Cotter’s Marker at the end of the bridge by the Damariscotta River. This building is now a restaurant. 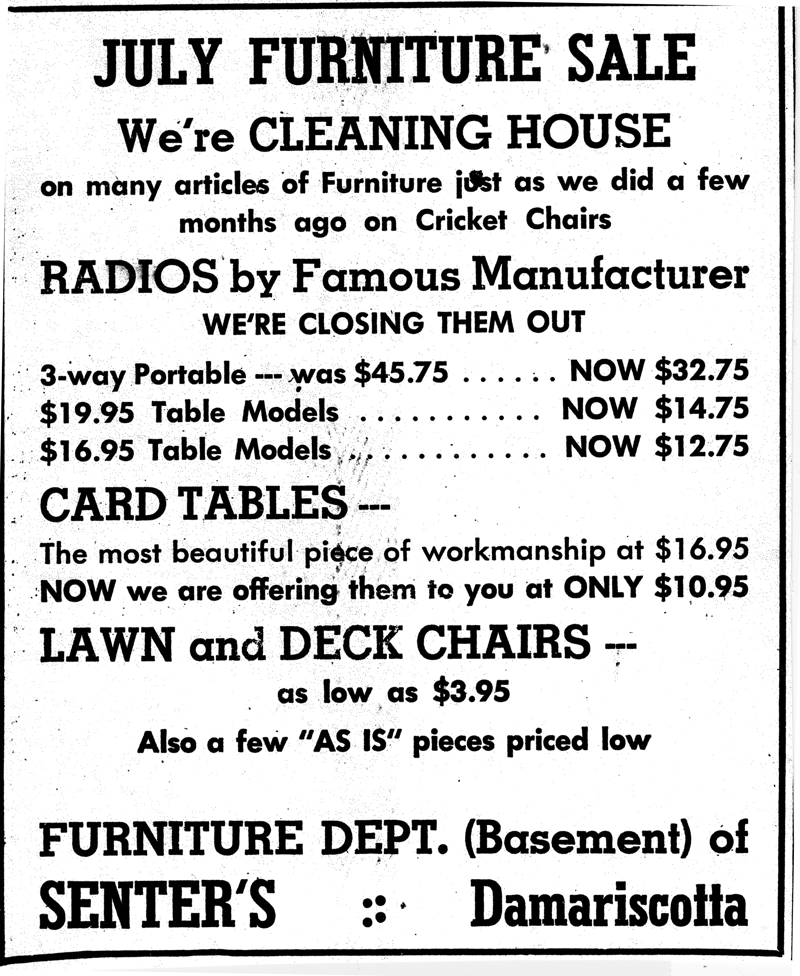 I now want to show you a real nice photo of the Colby & Gale Mobil-Flame and Mobilheat office on Elm Street next to Elm Street Lunch in 1948. Then to one’s surprise I show you an ad with all the goods they sold from that store on July 15, 1948.

Charles Gale was half owner of Colby & Gale. He married my father’s cousin who was Kathryn Pitcher, the daughter of Mrs. Etta Pitcher who lived to be 100 years old, who lived on the Lynch Road, Newcastle.

Charles Gale loved to fish and I have a newspaper photo of him when he landed an eight-pound salmon from Biscay Pond.

May you all have a safe week and enjoy all the spring flowers that are starting to pop above the ground.