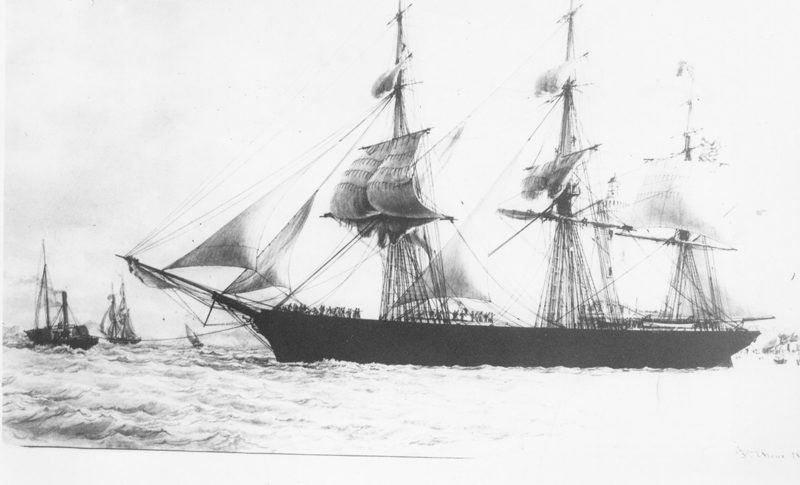 The Ocean Herald was built by Col. Cyrus Cotter here in Damariscotta on the end of Water Street in 1853. She was the largest vessel ever built in the Twin Villages. She was 234 feet, five inches long, and had a beam of 44 feet, two inches, and a depth of 22 feet, one inch. Her tonnage was 2,135 tons. One can read about this clipper in the book “Greyhounds of the Sea.” (Photo courtesy Marjorie and Calvin Dodge)

Much discussion went on among the shipbuilders, merchants, and ship owners. We find that these gentlemen discussed many ideas over many mugs of brew and a great Havana cigar.

Then in 1852, a shipbuilder by the name of Richard Green, of London, started construction of a vessel in the clipper class of some 699 tons. This clipper was to be named the Challenger; its purpose was to beat the American clipper which was called Challenge, of the port of New York. This new clipper ship was owned by a Mr. W. S. Lindsay and he was from London.

We find that the American Navigation Club was made up of some high-spirited ship owners and young merchants of Boston. Some of the names of these spirited gentlemen were Warren Delano, William H. Bordman, Edward King, John P. Cushing, and John M. Forbes. The race was to be a round trip race from a port of England to China and back, the rules being that each vessel start with a full load of cargo and return with a full load of cargo. This challenge was sent to the shipbuilders of Great Britain, but they received no interest in their challenge.

While the American Navigation Club challenge was pending, a group of seven vessels, which consisted of four American and three British vessels were recorded as follows:

History reveals that there was great rivalry among the American clipper-ship owners, builders, and their sea captains and it was the same way with Great Britain. The American sea captains took great pride in setting new records and speed with their vessels. These sea captains were always ready to lend a helping hand to another vessel or captain upon the open ocean.

When these American clippers were in the port of Canton, they would ballast their ship with barrels of beautiful Canton chinaware. These clippers needed ballast with a light load or cargo of tea. On today’s antique market, the real Cantonese platters and Cantonese covered soup tureens bring large sums of money and are highly sought after by collectors and dealers across our nation. We find that rare Chinese-export porcelain punch bowls of the Hongs at Canton including the American Hong with flag and decorated in famille-rose enamels brought over $50,000 in the year of 2000.

The Chinese people and the government are very active in buying back old items that were brought here by our American sea captains. We also find that China trade paintings of American and British ships while in China ports loading cargo to be brought back to America or England bring large sums of money in the thousands of dollars. We have found oil paintings from China, which come under decorative arts of the China trade, that have brought sums of $25,000-$35,000. The amazing thing is that all these items were brought back from China as cargo on these clipper ships for American merchants and importers from 1850-1860 in the lifetime of our maritime shipping fleets all over the world. Here again, the amazing thing was that some of our Newcastle- and Damariscotta-built vessels were among the vessels doing business with Chinese ports such as Canton and Shanghai.

There are some great oil portraits of American sailing vessels and many were Maine-built clipper ships like the American Bark that John M. Clark built in Bath, which sold for thousands of dollars.

Hong Kong was another sea port in China that our clipper ships sailed to. Many of our New England sea captains would bring back carved and stained ivory chess sets as China trade items as parts of their cargo. These are also highly sought after by collectors of ivory items. Chinese export of carved ivory and painted paper fans, depicting harbor and mountain scenes were often brought back to American ports and sold by local merchants throughout our nation.

We now refer to the shipyard of Donald McKay. He was a well-experienced man in building clipper ships over a period of years. He overcame the difficulties as to spars and rigging that had beset the minds of other shipbuilders; he had in his mind to build a much larger clipper ship that would be larger than any other on the high seas.

He placed his design on the drawing board and laid the keel for this large vessel. When the large clipper was almost finished and set on the stock at his yard, it was said this vessel was the most magnificent and beautiful ship the people of Boston had ever seen. This large clipper ship was launched on June 1852 and named Sovereign of the Seas. She had a tonnage of 2,421 tons. We quote: “Bells rang out with joyous greeting as she glided smoothly and swiftly down and into the blue water of Boston harbor.” The length of this vessel was 258 feet, with a beam of 44 feet, and a depth of 23 feet, six inches. This large clipper had 20 inches of dead-rise at half-floor. We quote articles saying that this vessel had the longest and sharpest ends of any vessel ever built. This new vessel had immense strength and great power to carry a lot of sails.

The Sovereign of the Seas carried a large crew of 105 men and boys. The crew consisted of four mates, two boatswains, two carpenters, two sailmakers, three stewards, two cooks, 80 able seamen, and 10 boys before the mast. Capt. Laughlan McKay had command of this large and beautiful clipper. He was a brother of the shipyard owner and builder Donald McKay.

Capt. Laughlan McKay was born at Shelburn, Nova Scotia in 1811. Like so many young men, Capt. McKay went to New York and served an apprenticeship there with Isaac Webb, and after becoming a master shipwright was appointed carpenter of the U.S. frigate Constellation for four years. When he took command of the Sovereign of the Seas, he was in his 41st year. He was a man of great strength and a body of gigantic build.

The Sovereign of the Seas left New York and headed for San Francisco on Aug. 7, 1852.

The beautiful ship Ocean Herald must have been a beautiful sight when sailing down the Damariscotta River past Glidden ledges and the lower narrows on her way to the open sea. Here again, she must have been an outstanding eyecatcher when under full sail to the eyes of the beholder, the pride of the people of Damariscotta. One must never forget this large clipper ship was built here in Damariscotta and ranked high among the most famous ships in history. The state of Maine contributed to some 28 beautiful clipper ships during those years. The owner of the shipping company of Everett & Brown of New York sold the Ocean Herald to the French government in 1856. The Ocean Herald was also written about in the famous book called “Greyhounds of the Sea: The Story of the American Clipper Ship.”