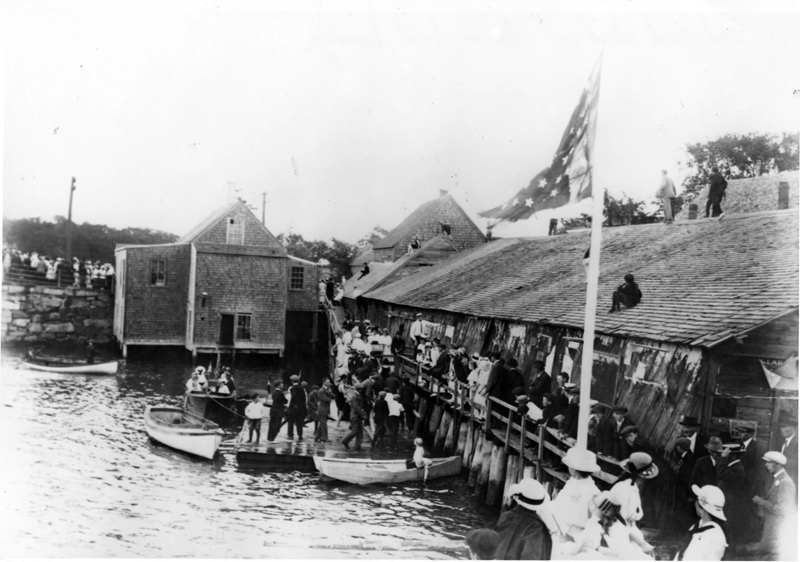 In this article, we want to talk and show old photos of Matthew Cottrell wharf and the historical events that have taken place over many years.

Matthew Cottrell and James Kavanagh were young Irish gentlemen who came to the Damariscotta and Newcastle area, according to the Maine Writers Research Club and other records that have been recorded over the years. Cottrell and Kavanagh established a general store and a sawmill, and built their own shipyard, where they built small vessels to carry their lumber to the West Indies area and bring back molasses, spices, rum, and other items.

First, they needed to build a wharf here, below the falls, where the river was much deeper so they could tie their vessels up to load their cargo and also unload their cargo on their return voyages from the West Indies.

Kavanaugh and Cottrell had to hire work teams of oxen and their stone drags to haul large rocks and other material to build their wharf alongside the Damariscotta River and out into the harbor and deeper water. They had to build the crib work for the wharf, which held the large stones, and drive all the wooden pilings and build the wooden deck for the wharf as well as build their shipping and storage buildings for their business.

The Damariscotta River was the main “highway” for travel in this time period. As this was going on, Cottrell started to build his Georgian-style home on lower Main Street across from his wharf, in around 1800. He and Kavanaugh did very well at building their vessels and shipping their cargo,  but like any business, they had their ups and downs as years went by.

We have some real nice postcards that show their store, a warehouse, and the so-called sail loft building out on the end of the wharf. There have been a number of different types of businesses on the wharf over the years, as we will show you in some of these photos.

From 1900-1914, lumber was still being shipped from this wharf and we have photos of two-masted schooners at the wharf with lumber piled high on the deck of these schooners. During the same time period, the local steamboat fleet was using the wharf as its home port with little steamers sailing daily up and down the Damariscotta River from South Bristol, East Boothbay, and New Harbor. 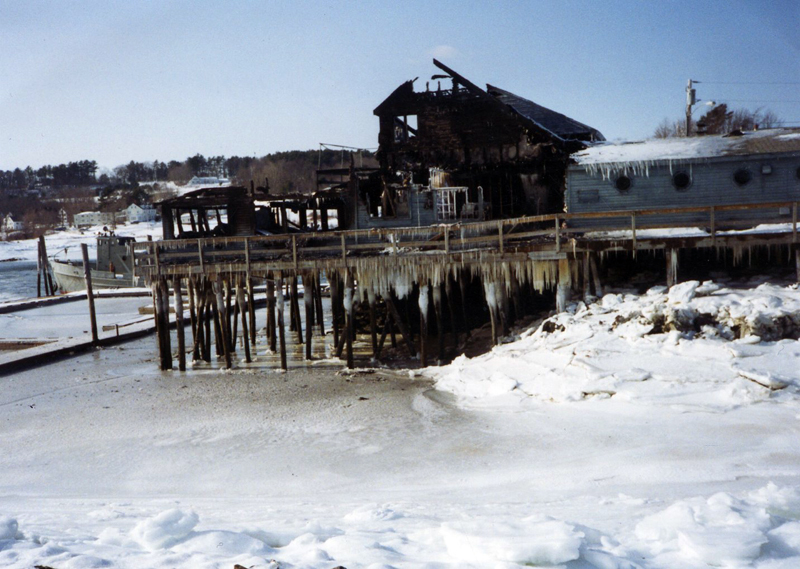 The restaurant at the pier in Damariscotta burned in 1993. (Photo courtesy Calvin and Marjorie Dodge)

The local fishermen used the wharf daily from spring to late fall. There was also a long coal shed on this wharf where local three-masted schooners used to bring in a cargo of hard coal for local heating of homes in the winter.

The passenger steamers Newcastle and Bristol used this wharf on daily trips with summer people as well as locals from spring to late fall.

From 1926-1938, John Morse used this wharf to outfit all 26 of his fishing boats he built at his shipyard, which was located on the site of the Damariscotta parking lot behind Colby & Gale gas station.

Upon the death of Morse, Harvey Marr took over the shipyard and also used Cottrell’s wharf as an outfitting pier for his sailboats, fishing boats, and then his World War II mine sweeper and military transports. We have real nice photos of these fishing boats and Navy boats tied up at the wharf.

Lorin Hanna took over a small building takeout. I remember buying soft shell lobster for 25 cents a pound and large crabs for one cent each and nice river clams by the peck and not by the pound. I also recall they made a real nice lobster or crab meat roll that was filled full of seafood and at a real good price for the local people. A number of local girls worked there during the summer months to earn money for school clothes.

For the 1958-1959 Damariscotta town report, Jake Day drew the front cover and it shows Hanna’s restaurant advertising shore dinners with lobsters and clams on the pier.

We had the pleasure of talking to Rosalie Campbell and she said she worked for Hanna back in 1959 while she was going to high school and earned money for her school clothes and extra spending money. She also said that Hanna was a real nice person to work for, and if someone gave the girls a hard time, Hanna would come right out front and quickly take care of the matter.

I also recall my father liked Putch Hanna and often bought lobsters and clams from his business on the old wharf.

We have another nice clear photo of a motor launch, a large sailboat, and other fishing boats tied up at the wharf over a period of years.

One of the last vessels to take on a cargo of some 4,400 barrels of alewives for the West Indies did so in the month of May 1942. We have a fine photo of the vessel, called Celeste M., at Cottrell’s Wharf. 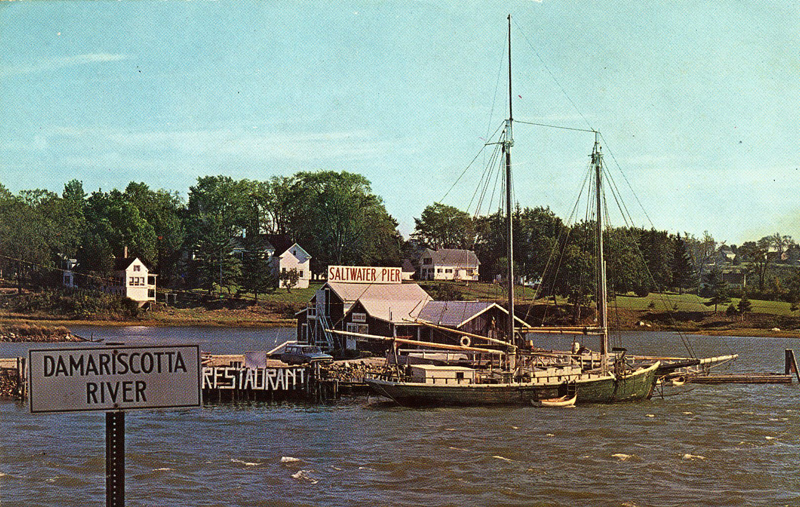 In 1959, Edward Myers bought and started to restore the so-called Cottrell’s Wharf in Damariscotta as a yacht landing and restaurant under the name of Saltwater Pier. Myers redid the wharf and built some of the buildings and operated his restaurant and wharf operation until 1964.

While operating the restaurant and wharf, Myers bought a two-masted schooner that was built in 1880 and tied it along the side of his wharf on the river side to advertise his restaurant. After a number of years, the schooner began to leak and fill with water. Myers filled the cargo hole of the schooner with empty gallon-size Clorox plastic jugs to keep it afloat. Finally, he had to have the schooner towed to the parking lot side of his wharf, called Misery Gulch, where it finally fell to pieces.

Now referring back to 1964 when Myers sold his wharf and restaurant operation to Robert C. Sanford and his wife, Katherine Sanford: I called Katherine Eaton to get the facts and the history about her parents’ operation of Saltwater Pier. She remembered that as a young girl her parents made some changes on the pier area, repainted the building inside and out, and made changes to the restaurant and added new items to the menu.

The summer restaurant business began to grow and everyone took a liking to the food and the new owners. It soon became a place to go to have a good seafood dinner on the wharf, where one could look out over the beautiful Damariscotta River.

After a number of years in the restaurant business, the Sanfords decided to sell the pier and restaurant to co-owners Mary Annis Bennett and William Prizer.

In February 1993, the former Pier Restaurant burned; at that time, Randy Duncan and his wife, Kathy, ran the restaurant that burned. An article in the paper stated the Pier Restaurant would become Schooner Wharf. The entire structure was undergoing repairs, as well as the wharf, by co-owners Bennett and Prizer and would eventually contain both shops and a living space, and boat slips available for rent.

On May 20, 2010, the headlines told of a Schooner Landing redesign, including new dine-and-dance events. The article said that changes would go on from there in order to accommodate the dine-and-dance events: “Schooner Landing has done a complete redesign and renovation of the restaurant interior and kitchen. Walls have been knocked down and a pool table removed to create a better view for diners of a new stage built for entertainers. Floors and tables have been rearranged and resurfaced and improvements have been made to the kitchen. It’s all part of wide-ranging plan for Schooner Landing by co-owners Charlie Herrick and Scott Folsom.”

Truly, there have been a lot of changes at Schooner Landing and now they have made arrangements for boat cruises down the beautiful Damariscotta River. They also provide a place where people can put their kayaks overboard and either go up the river and see all the small inlets or down the river to see all the oyster farms and sights of the river. They also have the annual Pemaquid Oyster Festival each year, which is greatly enjoyed by a very large crowd.